The residential shelter for homeless youth is up and running, and they have a dozen vulnerable teens in residence.

One, Mikey, has an unwelcome visitor, his mother's ex-boyfriend, who sees an opportunity for blackmail, thinking the youngster has fallen on his feet with his rich connections.

Alvin and Gordon have a hard time protecting the teen, as they unravel a plot to exploit Mikey, and discover the boy's not the only one in danger from a local gangster and his entourage.

If that wasn't enough, Gordon's past catches up, and a former boyfriend steps into the limelight, making Gordon realize he's over the man...and totally into Alvin Chestwick, bass guitarist for Three Bear Night. Who knew?

Gordon realizes Alvin’s a keeper. As a man who’s used to taking control, he finds himself soaking up Alvin’s TLC…perhaps it’s time to make things permanent.

“Dude, I love that you’re hitched, but could you please leave the smoochin’ and fondlin’ and public displays of wedded bliss for after I’ve eaten? You’re putting me off my key lime pie.”

Alvin’s complaint was greeted by ribald laughter from the rest of the country rock band and larger group, the culprits in question the loudest. He grimaced ruefully. What had he expected from this bunch?

Ox, lead guitarist and singer, reached over, dipping a finger in the mound of cream on Alvin’s plate, and made kissy noises. “Shot down again, huh?”

“I’ll shoot you if you dip into my pie again.”

Ox grinned, dabbing cream across his cheek. “Someone needs to get laid.”

Alvin grunted, figuring punching Ox in the head would be no good…the moron had no brains to addle.

“Someone needs to quit smooching in front of us singletons.” He groaned when T-Rex, their recently married drummer, flipped him off, then kissed his cute husband, Jonas Chastain—loudly. “Geez. Didn’t you get enough of that shit on honeymoon?”

“They didn’t get the memo it was over,” Ox said dryly.

Jonas shot them a wry look. “If you two boneheads don’t quit spoiling my mood, I’ll sic Mikey and his gang on you.”

Alvin flinched. “No need for that kind of talk. I was just sayin’.”

Ox laughed loudly. “Please tell me you aren’t afraid of a few teenagers.”

“I’m not afraid of a few teenagers…I’m fucking terrified. They eye me up like a piece of prime rib. Hormones fucking everywhere. I may need my own personal bodyguard.”

His sly glance took in former federal agent Gordon…now a mentor for the hellions in question.

“My heart belongs to another,” Gordon insisted, smiling.

“Sure he does. We’ve been together since he was a yearling. He listens to me, loves long rides through the forest, and doesn’t get pissy if I talk to other geldings.”

Gordon smirked back, giving him the once-over. “I’m shy.”

Alvin had to hand it to Gordon, he had a great sense of humor. Three Bear Night were a tight-knit band, full of banter, and it took a certain person to fit into the group’s dynamic.

Alvin turned serious. “I’m glad you came tonight. I wasn’t sure you would.”

Gordon eyed him with the dead stare Alvin despised. The shutters were back in place. “The shelter’s been open for three months now. Why wouldn’t I help celebrate you passing the latest inspection with flying colors?”

“You keep to yourself. Don’t mix much out of business hours.”

“I was concerned,” Alvin told him quietly. A flush edged Gordon’s cheeks and he looked away. “You took a bad hit a few months ago. You’re bound to have some kickback.”

Gordon’s flush deepened. The table of diners had gone silent. “I don’t need a keeper.”

Alvin backed off, hearing the stress in Gordon’s voice. Gordon may be in denial, but he sure as fuck needed somebody. His friend and colleague, Jimmy, had set him up, leaving him to die in the crash that had taken his leg. The crash set up by a bunch of psychopaths determined to hold on to their lucrative smuggling business. No wonder Gordon was distrustful.

Alvin placed his hand on Gordon’s, felt the light tremor under his touch. “I just hope you protect me from the hordes,” he whispered back. “Will you promise to protect me if they pounce?”

Alvin shook his head. They just didn’t understand. There were kids…then there were the hormonal monsters currently inhabiting the shelter. He said as much to Gordon.

Gordon patted his hand. “They’re not going to pounce, Alvin. Trust me. They’re young, frightened half to death that the shelter will suddenly disappear in a cloud of glitter, and they’ll be left on the streets again, fighting for survival. They’re decent kids who need careful handling. Not a pack of marauding wolves.”

Alvin sighed, only half convinced, taking a bite of his pie. Hmmm. He loved the zing of lime, the creamy custard filling, and licked his lips. Gordon’s gray eyes darkened to pewter. Alvin winked. Let the game begin.

“So, when did you meet him?” Alvin asked, between kisses.

Gordon struggled to breathe let alone think. Alvin’s mouth should carry a warning notice. Too hot to handle. And yet, like a moth, he returned to the heat again and again, addicted to the danger.

“Do we need to discuss this right now?”

Alvin chuckled, nibbling a seductive trail down Gordon’s throat, mouthing his Adam’s apple before licking his way south and feasting for a moment on Gordon’s distended nipples. Gordon shuddered, his entire body trembling with need. Damn, but Alvin packed a punch.

“You said you were cured of him,” Alvin said, coming up for air.

“I want to know, darling, why a man as smart as you picked an idiot like Larry fucking Jermaine.”

Gordon gasped as the seduction continued, his abs seared by Alvin’s mouth as his lover traced each ridge and dip, heading for the sparse forest of pubes below.

“Are you needy now?”

“God yes!” Gordon bucked, his cock swallowed to the root, that mind-blowing heat sucking slowly. Why the fuck were they still talking?

“So, do you often let yourself fall for the first guy to show you attention?”

Gordon’s happy buzz fizzled as a spark of anger speared him, and he flipped Alvin, glaring into his lover’s smirking visage.

“I don’t let myself fall for anyone,” he gritted, spreading and lifting Alvin’s thick thighs and slapping his cute butt sharply. “In fact, I hadn’t ever fallen for anyone. I was ambitious, determined not to let a piece of ass distract me from my life goals.”

“You fell for a psychotic twink. Was he part of your life goals?”

Gordon grinned evilly, reaching for the lube, and smeared it liberally over his tormenter’s hole. “No. They were all about the job and becoming a kick-ass law enforcer.”

Alvin moaned, writhing when Gordon probed at him with one long finger, stretching him gently. “How’s that working for ya?” he repeated.

Gordon kissed the smirk off his bear’s face, shoving his finger deeper and adding a second digit for fun. Alvin’s moans turned to growls, delighting Gordon with his ability to blow Alvin’s mind. Turn-about was fair, wasn’t it?

“It’s working fine, sweetcheeks. I got myself a new job, a new lover, and recently discovered a new ambition.”

Alvin panted, arching his back as a third digit added to his torment.

“Er, what ambition is that?”

“I figured out that I was infatuated by a pair of pretty blue eyes and a cute bod but was never in love with him. Once I saw through Larry, it occurred to me that infatuation is a far cry from what I’m feeling for you.”

“Here?” Gordon nailed his lover’s prostate, toying with Alvin as Alvin had toyed with him, driving him to the cusp of insanity. At the appropriate moment, he replaced fingers with dripping cock, sliding home in one slow thrust.

“I’m falling for you, Alvin,” he whispered against Alvin’s lips, ignoring the twinge in his leg as he began to thrust. “Nearly there. So close. So damned close.”

Alvin clutched at him, mashing their mouths together in a kiss that seared right through to Gordon’s toes. He grunted, thrusting harder, the heat spilling over. 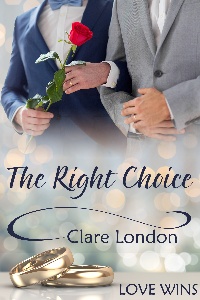