Rose isn’t a delicate flower as her name suggests. When kidnapped and faced with the threat of death by creatures that she didn’t know existed, she is left in the care of her very own brutal kidnappers. Though there is no denying the chemistry between them, she continues to challenge their authority and risks her own life to undo the sins of their past.

Dane, Camden and Blaze. Brothers and bounty hunters by fates choosing after being visited by a mysterious messenger of the supernatural. Desperate to get out from under the rule of the messenger, they resort to selling succubi to the biggest supernatural crime bosses to gain connections in the Underwood.

Kidnapping Rose turns into a beautiful accident, but can they win her heart after becoming the monsters she is so determined to defeat?

“Get the fuck away from me!” I shouted in his face. I picked my arm up and swung. I wasn’t able to get a lot of momentum with my neck held in place. But I wouldn’t give up so easily. The slap landed on his cheek, which barely even moved his head to the side.

“Did she claw you?” the blond man asked from the front seat.

“No, she’s playing all innocent on me.” He lifted up the chains and forced my hands and legs together and began chaining me up. I wiggled, cursed and fought the entire time until I was huffing, out of breath.

“I don’t know what you’re talking about. I don’t have claws, I’m not—”

“QUIET!” he shouted in my face. His hand shot around my throat and I was thankful for the metal collar that was keeping him from squeezing.

“You can’t manipulate me, little girl,” he whispered in my ear. Goosebumps sprang to life on the back of my neck. A throb began pulsating in my shorts. What was wrong with me? My body was betraying me, how could I be turned on when I was chained in the back of a van being kidnapped? The fear quickly wore off and was replaced by rage.

“Let me go, you stupid band of idiots!” I heard the blond man laugh at my insult in the front seat but it only seemed to make the man in front of me more angry.

He drew in a breath then began tearing at my clothes with his large hands. He slipped a hand into my shorts, fighting the chains and my thrashing limbs the entire time.

“Stop fighting, you little lying slut!” he yelled and was able to cup my thrumming pussy through my panties.

“I’m not lying, I have no idea what you’re talking about!” I pleaded for him to believe me.

“Oh really? Then why are you wet, demon?”

“Demon? You’re crazy! Let. Me. Go!” With each word I kicked my legs as hard as I could, dislodging his hand from my shorts.

“I’m going to fucking make you wish you never lied to me,” he growled out and withdrew a knife from his pocket.

“Cut me up all you want, you bastard, it won’t change a thing,” I spat.

He lashed out, slicing my chest with his incredibly sharp knife. I didn’t dare yell out in pain. I froze and stared him right in his green eyes, glaring holes that I hoped he felt in his soul.

“See? You stupid fuck,” I taunted him. The feeling of blood trickling down my chest only added to my need to defy this man. He couldn’t break me. We stared at each other, some of the crazed look faded from his eyes as he took me in. Was that admiration that flittered through his eyes? This man was confusing and impossible to read. He leaned down close to my face and for a split second I thought he was going to kiss me and my heart skipped a beat. Rose, he kidnapped, chained you up and cut you with a knife. Why would butterflies be dancing in my stomach at the thought of his lips on mine?

He dodged my lips and sank his face down to my chest and nuzzled his face between my breasts. He began licking up the blood I had just shed. His tongue trailed up my skin in long strokes. My lips parted, my eyes wide. What was he doing and why was I liking it?

“Blaze!” the tattooed man yelled from the driver’s seat. So that’s what this crazy man’s name was.

“What, boss?” Their eyes met in the rear view mirror.

“Don’t mark her up, they heal fast but not that fast. It’s tomorrow, remember?”

He had an authoritative demeanor. I could see why Blaze called him boss. He kept glancing at us from the rear view mirror.

“What’s tomorrow, what are you going to do to me?” Fear began to flood through me again.

“You ask a lot of questions for someone with a rabid dog right in front of them.” The blond man turned in his seat. His tone playful but warning.

“I’m not afraid of you. If you’re a rabid dog then I’m a fucking wolf.” I was only lying a little bit. I was afraid of what they had planned for me, I was afraid of the women with long claws across from me, but was I afraid of Blaze? For some reason, no. I saw him as a challenge I needed to overcome.

To my surprise, Blaze smiled, the crazy look coming back full force in his eyes.

“Then howl for me, baby,” he said with his gravelly voice and a smirk. He gripped my thigh and dug his thumb into the most sensitive spot he could find. I sucked in a breath and grimaced, curling up my legs and rounding my back. Doing everything I could to not give him what he wanted.

“Dane! I’m busy here!” Blaze let go and I could breathe again. I’m positive a bruise was already forming where his thumb dug into my flesh.

“You’re done for now. Knock her out. I don’t want anyone getting caught up in a succubus.” There was that word again.

Blaze’s hand slipped under the tight collar around my throat. Pressure built in my face as my head grew foggy.

“Shhhhh.” The last thing I felt was his hair against my cheek and his hot breath teasing my ear.

“I will not fuck my kidnappers!”

“She’s really hung up on that, isn’t she?” Blaze noted. We had gotten her undressed. Both my brother and I took turns removing her barely there coverings while I made out with her. I took my pants and boxers off, while Blaze guided her to the rug in front of the fireplace. He sank his head between her breasts, biting and sucking her flesh as he laid her down for me to take.

When I was ready to take his place on top of her, he moved to above her head. He rested her head in his lap, keeping his limbs free in case he needed them.

“Admit that you want it,” I demanded. I knew she wanted it, she gave in a little too easily. She melted like butter when my brother and I touched her.

“Shut the fuck up!” she hissed.

Blaze held his hand over her mouth and pinched her nose.

“Tap out when you want to tell the truth.” I ran my cock up and down her soaking pussy.

“I’ve seen you fight more than this, honey. Stop telling yourself you don’t want it.” She tapped, more like slapped, Blaze’s arm. He let go, ready for her to comply to me.

Instead she shouted, “You want to see me fight?” She kicked her legs wildly.

“You are a naughty little thing, aren’t you?” She was no match for me but I appreciated her efforts. I let her struggle against our grips until she got so fatigued that she fell limp beneath me while she caught her breath.

“Feel better?” I softly kissed her lips, then her jawline. I continued kissing down to her neck as she arched her back, pressing her breasts into me. Blaze was stroking his cock as he watched us.

“I’m going to take you. Hard and rough. Then I’ll make love to you softly.” Blaze took that as his cue to step in. He shifted back into place where her head was in his lap, he moved quickly so she wouldn’t catch on to what he was doing. He wrapped his large hands around her neck and squeezed. Her hooded eyes flew open and her mouth parted in alarm.

“Good girl, keep looking right at me when I take you,” I purred. Blaze was squeezing hard enough so she couldn’t take a breath.

With no warning I rammed my cock into her warm heat all the way to my balls. Blaze let go of his death grip around her neck and the living room filled with her screams. Music to my ears. I began pumping, her pussy felt so tight around me, milking my engorged member. Her brows furred with pain and pleasure. Her hands reached for something to hold on to and Blaze placed his hands in hers, allowing her to squeeze something but also pinning her down. I picked up the pace, pounding into her. Our moans melted together with the sound of my balls slapping her flesh. I couldn’t take it anymore. Warmth built in my core and exploded through my limbs as I roared my release, spilling my seed in her cunt. My furious pumping slowed until I collapsed on top of her. Blaze got up, probably to go blow his load and to give us a moment alone together. I wonder why he didn’t come on her, he probably had better plans for the first time he would mark her. We had successfully, for the night, tamed our woman. We both knew it wouldn’t last, but that was the fun of it.

I stayed inside of her until I hardened again and began bringing my cock all the way out of her then slowly back in.

She looked at me with confusion on her face and I chuckled.

“I told you I would make love to you after. Never had a guy with my stamina?”

I admit my ego grew a million times larger when she said she hadn’t.

She was done fighting for the night. She wrapped a leg around me, bringing me deep within her. She closed her eyes and moaned quietly with each of my gentle thrusts. 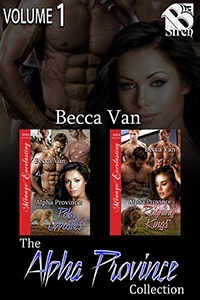