When Cora Carter signed up to command the U.S.S. Christina and its five-female crew, she never expected to be chased by pirates through an uncharted wormhole or forced to crash-land on a hostile planet where just about everything wants to kill her or eat her. And the big, hunky brute in the loincloth who keeps insisting that she’s his fated mate? Well, he definitely wants to eat her.

Horok, crowned prince of Tarilax, is taking a short break from the heavy demands of the throne when he spies a ship go down in his beloved forest. It could only be another trick by his sworn enemy, the Goridians. But, when he goes to investigate, it’s not an ugly, bloodthirsty savage that he finds. Instead, those wonderful benevolent gods have delivered him a divine little goddess of his very own, his amavi compar. Now, if can just convince her to stay! 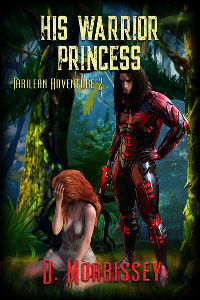 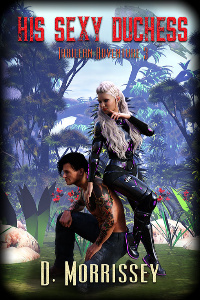 “Okay. Let’s try this again. On three.” Commander Cora Carter of the USS Christina gave each of her shipmates an encouraging nod and then turned her attention back to Lisa, their fierce young security specialist currently trapped beneath a ton of twisted steel in the outer lobby of the captain’s bridge.

The big, buxom farm girl from Arkansas was putting up a brave front, but Cora didn’t miss the sharp rise and fall of her chest as she battled back the pain with each raspy breath. Nor did she miss the tears that were pooling in Lisa’s eyes, or the way that she held them back so stubbornly. Cora was extremely proud of her. Hell, she was proud of the entire, all-female crew.

“Wait. Do we start lifting on three? Or, after you say three? Which, I guess would be on four,” Shauna mused almost privately.

Cora’s proud moment deflated like a punctured balloon right before her eyes. She studied Shauna with a heightened sense of curiosity, not really understanding how someone so smart could be so dumb.

“On three, which is why I said ‘on three’,” she said, closing her eyes and praying for patience.

Then, for the umpteenth time in the past half hour, she examined the tower of metal cabinets that rested atop Lisa’s leg, taking special note of the growing pool of blood quickly forming beneath her.

“You sure about this?” Dee narrowed her eyes at Cora, unconvinced.

No. What choice did they have? They certainly couldn’t leave her like this. She had made a decision, and they were sticking to it, dammit. Indecision and second guessing only got people hurt or killed.

Hiding behind a wall of resolve and speaking with a confidence she didn’t really feel, she steeled herself to reassure her team. “We can do this. Lisa, as soon as you feel the weight ease up, I need you to pull yourself out. Do whatever you have to do—roll, crawl, wriggle, drag yourself, whatever. Just do it and don't hesitate. Got it?”

Cora danced back and forth on the balls of her feet as she adjusted her grip on the edge of the massive metal brace, pumping herself up mentally, as well as physically.

“Remember to bend at your knees and lift with your legs,” she reminded them.

They nodded, and, as one, took a deep, determined breath.

The room erupted into a cacophony of grunts and sharp guttural exclamations forced between clenched teeth. The women tested the limits of their combined strength and the depths of their united resolve.

Leveraging every ounce of muscle in her body, which wasn’t nearly as much as she wished it was right now, Cora trembled from head to toe with the exertion.

Despite being the team’s fearless leader, she was still the smallest woman aboard Crossland Enterprise’s newest, cutting-edge interstellar space vessel. The ship was Earth's sweetheart rocket ship and their best chance of securing a future free of poison and pollution. It was also the ship on which the six exceptional women had been living for the past six months.

The cabinet groaned loudly, surrendering mere inches as it screeched and scraped against the wreckage. When Cora was sure that every blood vessel in her body was about to burst, she heard Lisa yell out, “I’m free!”

No time for confirmations—the women took Lisa at her word and cried out in unison as they dropped the cabinet noisily back onto the deck. Muscles feeling like jelly, Cora bent over and rested her hands on her knees, swallowing deep breaths as she struggled to regain her authoritative composure.

“I’m here!” Maggie shouted as she jogged through the bridge’s sagging double doors.

Cora watched her weave in and out of the ruins, hopping over heaps of rubble and slapping at stray wires as she made her way over to the patient.

“I need everybody to get back now,” she said as she knelt beside Lisa and began rummaging through a huge black medical bag. In seconds, a nonplussed Maggie produced an injector and leaned toward the wary invalid.

Cora and the other women took a few steps back, their eyes remaining glued to the scene unfolding before them. Knowing Lisa as well as they did, they all held a collective breath.

“Wha…What the fuck is that?” Lisa asked, her eyes bulging at the sight of the large, shiny injector.

Maggie chuckled, shaking her head. “Seriously? Our brave, fearless protector who not only survived an alien attack and a violent ship wreck before being pinned beneath a ton of steel, and who actually laughed through most of it, is now going to whimper like a little girl because of a tiny little injector?”

Maggie might be the best surgeon Cora had ever known, but her bedside manner definitely needed some work. Not to mention, it was never a good idea to antagonize a Level Three security specialist when they were down.

Lisa continued as if she hadn’t heard a word that Maggie said. “I mean it, Mags. What is that? I don’t need it.”

“It’s just a pain reliever, Lisa. Along with a little something to help you relax while I look at your leg.” Maggie had muttered the last bit under her breath. “The last thing we need is for you to go into shock.”

Relax, my ass. Cora hoped it was a freaking rhino tranquilizer, or there’d be hell to pay soon.

“I’m not! I mean, I won’t. Go into shock, that is. Just get that thing away from me.” Lisa’s lips pulled tight, and she leaned as far away from Maggie and the injector as was physically possible.