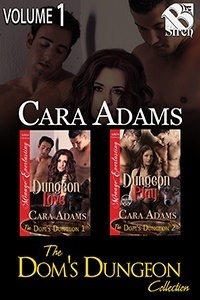 Taj Barlow, aged twenty-five, was one of the younger members of the crew at Nelson’s Building and Home Maintenance. Until Raff had joined the team, even though Taj had his trade certificate, as the baby of the crew, it’d been his job to bag the trash, sweep the floors, and go fetch the coffees. Taj didn’t mind. Since he was the youngest of four brothers that had pretty much summed up his entire life until he’d grown big enough to answer back, punch hard, and run fast. Usually in that order.

He watched idly as Adelaide, one of the receptionists at the dungeon, hurried across the Stage Lounge, followed by an attractive woman casually dressed in jeans and a sweater. This late in the evening a lot of the women here were wearing nice frocks and high heels. Earlier in the day plenty of people wore jeans. But right now, it made her look different from most of the crowd.

Adelaide led the woman across to a table where Cam and Hammer, two of the men he worked with, were sitting with Allegra. Allegra was an attorney who occasionally worked for the company and who Cam and Hammer were dating. He’d glanced over at their table a few times in the past half hour, and his own opinion was that the group had moved well past dating and into the hot stuff.

Allegra was an attractive woman, and he was happy for them. But the chick in jeans with Adelaide was more his style. A casual easy-going person. Well, he thought she might be. Not that he’d ever met her or even knew who she was, but he sure as hell wouldn’t mind talking to her. Maybe after she’d spoken to Allegra about whatever it was. It was clear her attention was focused on Allegra, although the men were there as well.

He was watching the fascinating woman so intently he didn’t realize that Gavan, the barman, was speaking to him.

“The woman you’re staring at. The one at Hammer’s table. I wouldn’t mind getting to know her better, too.”

There was no one at their end of the bar, so Taj asked quietly, “You want another ménage?” Once before they’d shared a woman. She was a sub who’d specifically asked to experience two men. Gavan had enlisted Taj’s help, and it’d been a mind-blowing experience. Already his dick was stirring at the memories of that night.

Gavan stroked his beard and then nodded slowly.

“I’m in. But what makes you think this chick would be interested? Do you know her?”

Perhaps she was a sub who came here regularly. Taj had assumed because Adelaide was with her that she didn’t know the dungeon, but maybe he’d gotten the wrong idea.

“I don’t know her, but the look on your face is exactly what I feel like when I look at her.”

Taj nodded. “I hope the fuck she’s not married or something. When they stop talking so intently, I’ll go over and bring her back here so we can both meet her, okay?”

Gavan nodded and moved down the bar to serve other customers. Taj left his food and beverage on the bar top and watched Cam and Hammer’s table. He supposed it was rude to stare, but it wasn’t as though he could hear what they were discussing or anything. They were thirty feet away from him, and the dance music had started up so he’d have been lucky to overhear someone speaking thirty inches away.

His woman stood up. Taj reached for his wallet to drop some money on the bar counter, and in the second he looked down at his pants, she vanished. He stared all around, stepped away from the bar, and saw a faint flash of blue over by the exit, but that was all. Shoving his wallet back into his pocket, he took off across the dance floor, diving between people there and taking as straight and fast a line to the exit as he could. She wasn’t in the hallway, so he ran to the foyer and out the front of the building, but she wasn’t there either.

He’d gone straight past the elevators, so if she’d been waiting for one, he’d have seen her for sure. Taj ran across the parking lot to the exit, but no car was coming up the ramp. She’d completely disappeared into thin air. How the fuck did she do that?

She pushed her body back against his, very aware of his cock, a hard thick line against her ass. Deliberately she rubbed her ass over his cock, back and forward twice. It was good to know this scene was arousing him as much as it was arousing her. He was breathing heavily, and her nipples were so hard they hurt.

Gavan must have noticed because he teased and stroked both her nipples with his thumbs while cupping and stroking the undersides of her breasts with his palms. Her eyes were almost shut with need, but she caught the faint nod Gavan gave Taj. Instantly Taj joined them and unsnapped the button of her jeans.

Gavan continued to pet her breasts, and Taj released the zipper on her jeans. He pulled it down so slowly the movement was almost imperceptible but finally he gave her jeans a little push at her hips, and they dropped to her feet. Taj kneeled down as well, freeing her legs from the denim and putting the jeans and her shirt against the wall.

Taj moved closer to her now, between her legs, and gently rubbed his hands over her stomach and sides. The skin of his hands was rough with calluses and harsh skin, but his touch was light and gentle. The contrast was an aphrodisiac all by itself.

Meanwhile Gavan stepped back from her just a few inches and unsnapped her bra, letting it fall to the floor before placing both his hands over her breasts again and lightly stretching her nipples. His hands were smooth, although not soft, and his touch, while not rough, wasn’t soft either. Assertive, she decided. His touch was assertive. He knew what he wanted, and there was space for her to object, but the basic assumption was that her body would agree with Gavan’s directives. Hell, he was a Dom, through and through. There was no doubt in her mind about that.

“Let’s get a little closer to the mirror,” suggested Gavan.

Nerida had no idea why he wanted them to move. She could see everything perfectly well from where she stood, but she allowed herself to be nudged forward.

Taj settled her with her hands on the mirror, and then he tugged her pale blue panties down and off before he lifted her right leg up and showed her how to rest it against the mirror, so her knee was supported.

Gavan was back behind her again, naked and wearing a condom. “Maybe not, but I do hope you’re ready to be pleasured. Taj and I hope to give you an orgasm each.”

Suddenly an orgasm—actually two orgasms—was all she could think about. Hell yes, she wanted to come.

“I’d be really disappointed if there was no orgasm after all this foreplay,” she said and then gulped as Gavan gripped her hips and slid into her from behind.

Taj braced her right leg with his and held her pussy lips open with his left hand. “Watch. Watch as Gavan fucks you. See your cream? You’re very wet and juicy.”

Nerida almost came on the spot as she watched Gavan’s cock slide into her cunt at the same time she felt him stretching her sensitive tissues. It had been a long time since she’d had sex, and she was very tight, but she was also very wet. The men had aroused her higher than she’d ever been before, and she had to take a deep breath not to explode as soon as Gavan filled her.

Slowly Gavan pumped in and out of her pussy, and Nerida saw her mouth was hanging open in delight. It took all her willpower to close her lips and keep breathing. Damn he felt good. So huge and yet so gentle. And the men were right. Watching him fuck her in the mirror made it ten times more exciting by adding the visual aspect to his touches and her own body’s sensations.

Taj pressed his body against hers and pulled her pussy lips wider apart. “Look. The inside of your cunt is red now instead of pink. That’s because you’re hot and close to coming. See your cream glistening on Gavan’s cock? See how wet you are. You’re bathing him in your sexy juices.”

Nerida groaned. She could see everything in her pussy. She wanted to close her eyes and lean back on Gavan’s hard body and relax, but she couldn’t. The hypnotic entry and withdrawal of Gavan’s cock held her attention, and she couldn’t look away.

He pulled out of her and then drove in hard and fast. As he did, Taj reached over and pinched her clit. The harsh little nip sent heat rushing through her body, and Nerida gasped as her climax roared through her right behind the blast of heat.

“Look at your cunt ripple around my cock,” ordered Gavan.

Nerida’s eyes had slammed shut, but she managed to crack them open just a slit and watch her pussy gripping Gavan’s cock in her release. Taj lifted her leg down so she could stand properly and then moved away. Nerida’s eyes were shut again as she breathed hard, trying to settle her racing heart. That had been an excellent orgasm. The best one she’d had in a very long time. Watching herself in the mirror had amplified the effects of the sex enormously.

She opened her eyes again as Taj placed a chair in front of the mirror. He was naked, a condom covering his cock. A cock that was long, thick, and hard. Of course, he hadn’t come yet, even though she had and so had Gavan. Yet he’d helped and supported her in her orgasm. His talking dirty to her had also been an aphrodisiac enhancing the sex with Gavan.

Taj sat on the chair, legs spread wide, held out his arms, and asked, “Are you ready for your second orgasm yet?”