Daniel was different, at least that’s how he saw it. It wasn’t easy to be all man when all he wanted was to wear lace.

Daniel had lived his life doing all of the things a young man should do, but it never felt completely right. He then discovers that wearing women’s clothes is what he has been missing.

Now, how to tell the world?

READER ADVISORY: A Transgender Novel containing scenes of Homosexuality and Cross-Dressing, as a young man comes to grips with his sexuality and who he really is. 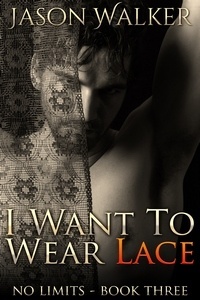 “Janet, I can’t ignore this part of me anymore. I haven’t felt whole in a long time. This is why. I can’t be anyone other than who I am, regardless of the danger.”

She put her arm around her friend’s shoulders and pulled him into a hug. “I know, Danny. You are who you are and to try and be anything less isn’t fair. You have to be who you are.” She motioned to the mirror. “This is a big part of who you are.”

“I’m still afraid.” His voice was low and broken.

“I know. I am afraid for you, but I’m more afraid of what you are doing to yourself by shunning this part of you.” She took him by the hand and led him back to the living room. She had the forethought to grab his robe as they passed. She draped it over his shoulders as they walked and he slipped his arms in as he sat. Janet held close to his side.

“Danny, we all have our fears. Hell, my mom made it out that all I should ever think about is being raped. She was so convinced that every cute girl was a rape target, she actually used to get me to have haircuts that were purposefully ugly. It was her attempt to make me undesirable to the creepers. Aside from that, I believe that to a degree, life is fear. When we are little, we are afraid of everything, disappointing people, strangers, the dark and the boogeyman. As we get older, the fear changes. We become afraid of meeting the wrong boy or girl, of getting bad grades, having weird feelings and everything else. Then you get up to our age, and there is the fear of STDs, getting pregnant, not graduating, not getting a job, not being able to pay bills, hell, I’m afraid of all that and more. But the one thing we can never be afraid of is being ourselves. You are who you are.

“When I first found out about the cross-dressing, I’ll admit, I didn’t really understand it. I thought it was some kind of fun little kink you had, but I learned that it is so much more than that. As I said, it is who you are, not just that you are wearing it. My dad used to tell me that the hardest thing a person ever has to do in life was to get comfortable being who you really were. Honey, you know who you are, you just need to be comfortable being that person again.”

By the time his friend stopped talking, he was fighting more tears. She pulled him into another hug and the dam burst. He held his friend and cried. It was a loud and ugly cry, but it had to happen. She thought it might be a little more of the effect of the alcohol than her words, but whatever brought it out, she knew he had to let it free.