Myla Samson ran from someone that was terrorizing her and fell into Kole and Derek's arms. After so long, she finally felt safe again. It didn’t last long before she ended up back in the hands of something worse than death, and she found out the threat against her was much larger than they all knew.

After she’s rescued, she has to come to grips with the damage that’s been done to her both physically and emotionally. But she found it paled in comparison to losing the two men she loved more than her life.

Kole and Derek had not done the one thing they said they would. Protect Myla. After she’s found, they come to grips with the fact she deserved someone better than them. After the dust settles, they realize how much damage they’d done to all their lives and try to find ways to bring her back to them. But can they gain her trust again or lose her for good?

Deputy Kole Bennet sat behind the car he’d just stopped and called in the license plate. His eyebrows went up when it shouldn’t be on the old Ford in front of him but on a Toyota truck.

That usually meant the vehicle was stolen, but who would steal the piece of crap vehicle that sat in front of him?

He got out of his car, walked carefully up alongside the car, looked in the window, and shined his flashlight into the dark interior. His first look at the young woman hit him hard. She was very petite with long black hair that was in a tight, thick braid that laid over her shoulder and covered one of her breasts. Her eyes were large and a light green and filled with fear and exhaustion. The shadows under her eyes and the paleness of her skin showed him it had been a long while since she’d gotten any sleep. Something that didn’t sit right with him at all.

Her voice was barely audible and shaky.

“Do you know you were going seventy in a fifty-five mile per hour zone?”

Her eyes widened. “No, I… I’m sorry. I should have been paying better attention.”

He watched one of her hands come up to push some of the strands of hair that had come loose away from her face. The tremor in it was unmistakable.

“We’ve also got another problem.” He watched as her eyes dilate when her fear spiked. “The license plate doesn’t match the vehicle.” His concern arose as her face turned paler, and she looked like she was about ready to run. He quickly reached in and turned off the car, and took the keys.

“Do you have a license and registration for the vehicle?”

“I….” She paused and then grabbed for her purse. She pulled out her license and handed it to him.

“It says here you’re from Virginia. What are you doing in Louisiana?”

He could tell she was lying. She was actually the worst liar he’d ever encountered. And if she weren’t a sub, he’d eat his shoe. Being a Master Dom at the Pirates Cove Club as long as he’d been, he could pick them out pretty quickly.

“Let’s get you out of the car and talk.”

Kole sighed. “Please don’t be afraid. We’ll get things worked out. I promise. But I’m concerned about you, honey.” He opened her door and grabbed onto her upper arm. “Come on, let me help you out.”

He brought her back to stand against her trunk and face him. He turned off his flashlight and stuck it in back in his belt.

She was smaller than he first thought. Her license said she was five-four, but she couldn’t be over five-two.

He crossed his arms over his chest. “Tell me again why you’re in Louisiana?”

His eyebrows rose when she tried to be belligerent and failed. The more he studied her, the more agitated she became.

“Are you planning on going back to Virginia soon?”

His eyes narrowed on her. “Are you in trouble?”

“What are you running from?”

Kole was becoming more determined to find out what was going on with the woman. “Wait here.” He walked to the passenger side door, opened it, and got in the glove compartment. He sighed and walked back to her.

“Your license said your name is Myla, but your registration says you’re Dirk Williams.” He waited for a moment. “You don’t look like a Dirk.”

“I’m not. He’s… a friend.” Her hands fisted until the knuckles turned white.

He smirked. “You know if I were you, I would never play poker.”

A confused frown puckered her brows. “Why?”

“Because you suck at lying.”

He rolled his eyes. He came to a quick decision. “You’ve got two options. The first one is I arrest you on suspicion of car theft.”

“Or you follow me home, and we figure everything out.” He raised a hand. “I see the look in your eyes, honey, and I swear to you, I have your best interest at heart. There’s something about you that makes me want to cuddle and protect you.” He couldn’t very well tell her he was a Dom, and it was their nature to take care of women and children.

“Then it’s about time you did.”

Her eyes narrowed, and she fidgeted where she stood. “What if you’re really a human trafficker?”

He barked out a laugh. “Really?”

Oh, fuck. She couldn’t possibly mean she had been a victim of something so repulsive it always sent rage through him. “To you?” he growled.

She pressed her lips together and raised her chin. “No.”

“You will eventually answer every one of my questions.”

He crossed his arms. “Is that what you want?” He hoped she didn’t call his bluff because there was no way he was putting this little innocent in jail.

She flinched when he cupped her chin. “Easy. I just want to look in your eyes. When’s the last time you had any decent sleep?”

“About seven months ago.”

His brows snapped together. “I think you should ride with me. I’ll have—”

“No,” she burst out almost desperately. “I need my car.”

He studied her for a moment and caught the look of panic that started to build and then handed her the keys. “Fine, you follow me, but we’re going to take it slow. If I see you swerve or lag, I’ll drag you into my car. Got it?”

Derek lifted her up into his arms. “Let’s move this to the bedroom, so we have room.”

They laid her down in the middle of the bed and stripped her before pulling their own clothes off.

Her tongue slid out to wet her lips, making both men groan.

Kole laid down beside her, turned her head towards him, and started nipping at her mouth at the same time his hand stroked up and down her side. She gripped his hair and tried to pull him closer, but it only made him laugh.

She narrowed her eyes at him only to have him smirk and retake her lips.

She flinched when Derek moved in between her legs, spreading them wide.

She ripped her mouth from Kole’s. “Please. Close the drapes and turn off the light.”

“Not going to happen,” Derek said. “I need to see this cunt of mine before I taste it. You want my mouth on you, don’t you, baby girl?’

A shiver raced down her spine. “Yes.”

A gasp tore from her mouth when Kole bent forward and gently bit down on one of her achy nipples. She bowed off the mattress when he sucked it into his mouth, licking and nibbling until she felt almost too much pleasure.

Her nails dug into Kole’s shoulders when she felt a finger separate her pussy lips and then press down on her swollen clit.

Derek circled her cunt before plunging his finger in until he couldn’t go any farther. He moaned. “Jesus, she’s tighter than fuck.”

Kole cupped her breast and used his thumb to circle her nipple before squeezing it between his thumb and finger. He watched her carefully to see how much pain she liked.

Kole chuckled and added a bit more pressure, making her whimper with need. “That’s a girl.”

“Then don’t. She’s more than ready for you.”

Derek sprang up and tore open a packet, and rolled a condom on before lining his cock up to her cunt. “Nice and easy, baby girl.”

Kole slipped an arm under her shoulders and held her tightly against his chest as Derek took her slowly. Inch by inch.

Kole slid his hand up and down her torso, cupping her breast and then moving down again. “We know what you need. Let Derek make you feel good.”

She felt her pussy tighten on Derek as she gripped Kole’s arm with one hand, and the other she grabbed the blanket under her hips.

She tightened her legs and tried to bring Derek closer but only got a chuckle from him.

“You’ll get what we give you but only when we want to.”

She was glad to see he was fighting it along with her when she noticed his gritted teeth and the tendons and veins that stood out on his neck, shoulders, and arms as he held her hips.

“Give her what she needs.”

Derek started pounding into her, going faster and harder with every thrust. “Come for me, baby.”

She felt the band that had been tightening inside her snap, throwing her up and over the edge. She heard a scream and a deep groan and vaguely realized it was her and Derek. He continued to pump into her and then collapsed forward.

The breaths see-sawed out of them until they both settled.

Tears came to her eyes, and he tenderly kissed her eyelids, cheeks, and lips. “You are so beautiful, and we are never letting you go.”

She tightened her arms around his shoulders and nodded. She never wanted to leave them either.

He pressed another kiss to her lips and then pulled out.

Before she could move, Kole was on her, plunging into her. If she had thought she was tired, it was taken away instantly with the feeling of Kole stretching her cunt. Her nails dug into his sides, and she raised her knees.

“That’s it, love.” Kole pumped into her several times, pushing her need higher with every stroke. “Derek, get in here,” he growled.

She felt the bed beside her dip and then Derek’s body press against her side.

“I’m not going to last. Get a finger into her.”

Myla didn’t understand what that meant until she felt the tip of Derek’s finger invade her ass.

“Shh, it’s okay, love. Derek’s going to help me throw you over. We won’t hurt you. You know that.”

She nodded and relaxed.

Her breath stuttered out of her lungs as Derek pulled out, swiped some of her cream, and pushed back in. He did this several times until his finger was as deep as it would go.

Derek nuzzled her neck. “That’s it. Let it take you.” He pulled out. When he pushed back in, it stretched her.

Derek chuckled. “That’s two of my fingers you have in your ass, and I can tell it wants more.”

Kole tried to chuckle, but it came out a groan. “Now! Throw her over.”

She didn’t know what that meant, and then all thoughts splintered as they both worked together, thrusting violently inside her two holes.

Her nails dug into Derek as he whispered in her ear. 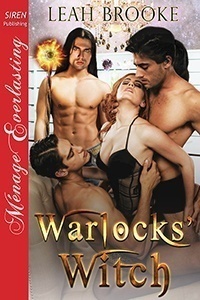