This is a tale of unrequited love . . . but will it be requited by the end? Of course, it will — this is a Christmas story after all!

The question is, how will Gren, a troll and bartender at Pogue’s Bar, prove to Ligia — a beautiful blonde Siren — that he is the man for her? When unexpected circumstances bring them together, he jumps at the chance to give her a special Christmas present and show her that he is everything she needs. Will his present — a session in his personal S&M playroom — be enough? Or could her Siren song cause his death in the process?

The troll leaned in, placing hands either side of Ligia’s shoulders, holding her in place. “Why not try being the submissive for once?”

Her hands pounded his arms but he wasn’t letting her go. Instead, he bent his head to nuzzle her neck. “I think you’ve always fantasized of a Dom taking charge and keeping control, not letting you seduce them into doing what you want.”

Gren could feel Ligia trembling as he kissed her skin moving closer to her luscious mouth. “Never!” The Siren’s verbal response was at odds with her body.

He held himself a hairsbreadth from her lips. “You let Dante order you around.”

She huffed. “It’s a game we play. I always let him pretend for a few minutes.” Then she remembered the demon was dead and her attitude changed as she pushed at his chest. “Let me go. I’ve had enough Doms for one night.”

He was surprised by the sudden change in her demeanor and made a swift decision. “No.” He wasn’t going to let her go in this mood. She needed something to get over what had happened earlier.

The Siren frowned. “What do you mean, ‘no’?” She tried pushing him again with more determination this time.

Gren chuckled when she failed to move him. “Oh. And who exactly is in charge here?”

Ligia’s jaw dropped in astonishment. “There is no way I am letting you dominate me.”

The troll moved quickly, grabbing her hair tightly in one hand, pulling her head back. He encircled her waist with his other arm dragging her away from the wall. It was like taking an animal by the scruff. Ligia froze in his arms, her eyes widening in amazement.

“That’s more like it. What you don’t know, sweetheart, is that when I’m in here I’m the Dom! I was just letting you have a bit of fun before. It’s my turn now and I want you to kneel down.” 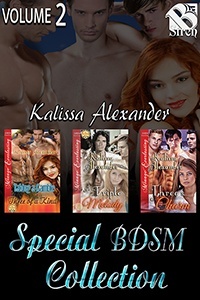 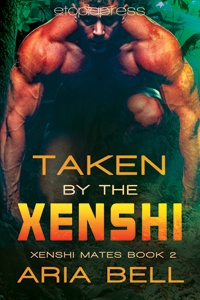