Sydney Mabry has had a crush on her sexy neighbor, Steven Teller, for months, but no matter what she does, she can’t get his attention.

When Steven makes an uncharacteristic slip of the tongue and admits he writes reviews for adult toys and novelties, however, Sydney uses the information to get her foot in the door ...

With an eye toward Steven’s bed. 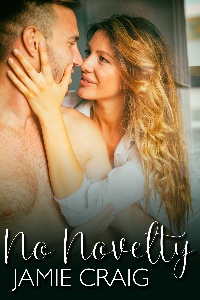 “I think this might be the highlight of my month,” he said, passing her plate to her.

Sydney took a piece of the garlic bread out of the bowl and tore a piece off. “It ... doesn’t have to be such a treat,” she said carefully. “Nothing says we can’t do something like this again.”

“No, there’s nothing saying we can’t do this again. But I wouldn’t want to impose on you.”

“I wouldn’t offer if I didn’t want to.” She nibbled on a small piece of the bread before adding, “I’m just glad you actually let me in the door this time. If I’d known it took making an ass of myself and then tempting you with food, I would’ve done it a lot sooner.”

Steven blinked. “You wanted to come in? Why?”

The question seemed to confuse her. “Why wouldn’t I? We’re neighbors, and you’re a nice guy. I’ve wanted to get to know you better for months.”

“Oh.” Steven took a small bite of the food and almost moaned from the flavor explosion in his mouth. He was perfectly happy to survive on delivery and frozen food, but he couldn’t pretend he preferred it to something homemade. “I wanted to get to know you better, too.”

Her entire face brightened at his admission, dark blue eyes glowing with pleasure. He had always considered her one of the prettiest women he’d ever met, with her lush mouth and warm smile, but seeing her like this transformed her into something truly beautiful. “So now’s our chance. Feel free to ask me anything you want. Anything.”

“Anything?” Steven tilted his head. “Do you really think I’m old enough to need Viagra?”

“Oh, no.” She laughed. “That was just the first thing that popped into my head when you said marital aids, and considering how gorgeous you are, it just seemed a little out there that you’d ever need something like that.”

Steven felt the back of his neck start to burn, but her laughter was so easy, and the smile on her face so genuine, he actually felt at ease. “No. I can assure you that I don’t need anything like that. Or any of the other things I’ve got around here, for that matter.”

“Other things?” For the first time, she seemed to take notice of his apartment, her head swiveling as she cast her eyes around the room. “You mean like more ... marital aids?”

“Yeah.” Steven looked down, suddenly sorry he had mentioned them at all. “You’ve seen all the packages that get dropped off here.”

“Well, yeah, but I didn’t realize that meant you kept them.” She gave up her search, but the gaze she turned back to him was bereft of any condemnation, still warm and appreciative, still beckoning him to relax. “Is it hard?”

Off and On Again (MM)
Tia Fielding
In Shelf
$2.99
Tweets by
sirenbookstrand