When Savannah Beaumont stumbles over what could be the missing piece to solving the disappearance of a local woman, she devises a rather scandalous misdirection to ensnare the help of one hunky detective. And snare him she does. One night in his arms, however, taps a passion unlike any Savannah’s ever known—more than she bargained for when she vamped up her looks and put on her sexy, come-hither smile.

Trevor doesn’t deny his attraction for the seductive Georgia peach. But he refuses to believe in some ancient Lakota legend, even when the connection he and Savannah has transcends any he’s ever experienced. Working the case together, sleeping together, however, Trevor finds it harder and harder to deny that his emotions have become as tangled as his sheets.

Can Trevor save the woman who’s stolen his heart before a killer takes her life?

4 TEA CUPS: "Raven Fyre wrote a mystery, that through the sexual overtures, you almost forget it was a mystery murder case. Savannah had a successful career and growing up she was raised to believe women didn't dress or act like a free spirited woman. Being raised as she had, the sexual tension of keeping it at bay for years came out. Savannah was determined to get the help she needed from the only person she felt she could trust; Trevor Bird, her brother’s friend. Trevor was enjoying a beer in the local bar with his friend when he felt, before he noticed, Savannah coming through the door. She was the most gorgeous woman he had ever laid eyes on. He wasn't into one night stands he had outgrown that years ago. Now dinner and quiet nights were what he was into, until he heard her order her drink and then she became his Georgia peach. Trying to ignore her became impossible until he saw that she was in serious trouble and needed his help, as well as his protection. Savannah knew that she couldn't trust anyone else with what she had found out by a local murder. Trevor and Savannah embarked on a rollercoaster sexual relationship with all the turns and twists of sexual highs. They were great when it came to sex, both were demanding and knew exactly what they wanted, but were considerate enough to give each other the satisfaction they craved. Their sex had no boundaries. They tried sexual positions that brought astronomical orgasms. Emotionally they were a mess; neither trusted each other enough to let go and let the love that was there blossom. That’s until danger walked through the door, literally. It put their love in perspective, not only could they trust each other sexually, but also emotionally." -- Wendy, Happily Ever After Reviews

He wanted her more than he’d ever wanted any woman, in a way he’d never wanted another woman. Needed her. The very next beat of his heart seemed to depend on the outcome of the war that waged behind those emerald green eyes.

Without granting her time to think, or God forbid refuse, he lowered his mouth to hers. Heaven. Oh, but he’d known. There was no struggle, no resistance. Only surrender. Sweet, giving, a gentle brush of lips to lips as she sighed, and her body arched against his.

“Savannah,” he whispered against her lips, feeling oddly unsure of himself as a man in a way he had no capacity to deal with.

Smiling softly, she traced a thumb over the swell of his lower lip. “When you come inside me,” she said boldly, “I want you to say it again.”

Awestruck. He was awestruck. Clearly, she wanted him as much as he wanted her. She’d managed to steal his breath, swipe his brain of all thoughts.

Recovering quickly, he demanded, “When you scream, I want my name on your lips.”

With that, their mouths fused. Lips, teeth, tongues battled—not for the upper hand, but simply for more. Nips, greedy licks, flesh crushed to flesh, warring strokes that stole the breath and set off raging infernos of heat.

Only in his dreams had he dared to hope there’d be such heat, that she’d respond so openly, so avidly.

Hunger had him all but devouring her dampening flesh. Beginning with the temptingly sweet hollow of her throat, he worked his way up to her chin, skimming his lips along her jaw, nipping with greedy little bites until he tugged at the soft lobe of her ear. He needed to touch her everywhere, to taste her everywhere as if he might imprint himself on every inch of her. Hastily, he shoved her already bunched skirt higher and cupped the satin-covered globes of her ass.

“Yes. Yes!” Savannah moaned aloud and writhed beneath him, rocked into his palm when he parted her thighs and cupped her molten center.

Shoving aside lace, he dipped his head to her center. “Have to taste you.”

“Yes, Trevor,” Savannah pleaded, the edge of desperation sparking a thrilling fire in his blood. “Hurry.”

Hard, fast flicks of his finger had her clit swelling, hardening in response, and had her panting for breath. Then his mouth was on hers again, feasting as he spread her delicate folds and speared her slicked sheath with two fingers. It was like plunging into the heart of the sun. She was on fire for him. The realization fueled his own recklessly building arousal to new heights.

Her hips bucked, and her head thrashed wildly while he stroked in and out. In. And out. His thumb applied pressure to her clit, and her body responded instantly. She came fast and hard, gripping his wrist just as the inner walls of her pussy contracted around his fingers in frantic waves that sent more of her juices flowing into his hand.

“Savannah, baby, you are so wet, so hot.” Trevor’s lips scorched along the line of her throat while he continued to stroke her quivering sheath. His long, thick fingers sliding in and out, picking up the pace instead of showing her mercy when the peak of climax crested. Everything in her center began to coil, to tighten and swirl again with the desire he stirred.

Then his head was between her splayed legs, the thick, dark strands of his hair tickling her thighs, and Savannah nearly melted into the sheets. His hot, velvety tongue flicked her throbbing, sensitive clit, traced the path of her slit. Firm yet tender fingertips spread her folds, held her wide for his probing tongue. With strong, purposeful thrusts he plunged into her aching center. Again. And again. He was fucking her pussy with his clever tongue, the deep, smooth strokes dragging her toward the jagged edge of another release. Closer. Higher.

He slipped his skillful fingers back inside her to scissor and slide, thrusting deep again and again to torture her most sensitive spot. Ever so lightly, he sucked at her clit.

The spring of need wound tighter, and impossibly tighter still, as her pussy gripped at his fingers with all the inner strength she possessed. She was so, so close. All it took to send her over was a final nip at her throbbing clit.

Could she survive it?

“Trevor,” she could only whimper.

“I knew you’d taste as sweet as that honey dripping from your lips.”

Far before the third dangerous fall, he eased back and tugged her panties off her hips, down her weak, shaky legs. “I want to see you in the moonlight, Savannah. All of you.” 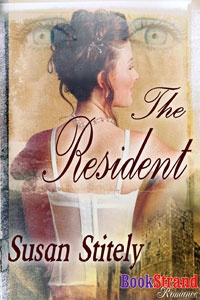