Brett is called onto the case of a missing child by Jiang, Brett’s ex-boyfriend. His first concern is finding the little girl. Jealousy clouds everyone’s judgment, pitting Brett’s former lover against his new one. A betrayal puts that child's life at risk and they all have to work together to get her home safe.

Will Brett have any lingering feelings for his ex-boyfriend? Can Genius convince Brett that they make a better pair? Time is running out for everyone. 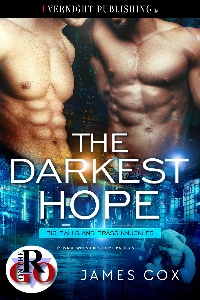 Genius put on the coffee. That amazing smell drifted through the apartment. He took a quick shower, then set up a video of a romantic fireplace on the TV and lit a bunch of candles around the house. Condoms on the coffee table along with a small bottle of lube. He was feeling romantic, so he also got out his rarely used heart boxers. That was the only thing he wore when he opened the door twenty-five minutes later.

Brett arched a brow. “What if it was some stranger?”

He toed off his shoes, looking good in his black suit pants and plain button-down shirt. The gun and badge were still on his hips as he glanced around. “What’s all this?”

“What do you mean? This is how my apartment always looks.” Genius grinned.

Brett grabbed his hand. “All kidding aside, thank you for the last few days.”

“All kidding aside, you’re welcome for the last few days.” Genius closed the distance between them, wrapping his arms around Brett and holding him tight. He savored the body contact and warmth.

Brett stuck his face against his neck, his lips pressing firmly.

“Thought you wanted coffee first?” Genius eased back so he could look into that handsome face. He couldn’t fight the urge to kiss him. Their lips met slowly. Softly. It was like they were making love with their mouths. Genius tugged the bottom of Brett’s shirt up, and they parted so he could take it off.

Brett’s pale skin was a little sweaty from the summer heat outside. Those nipple rings glinted beautifully in the candlelight.

Genius licked the right, then the left, tugging on it just a little. He kissed Brett’s pec, trailing his tongue upward until their lips met again.

There was a thud.

Genius glanced down to see Brett had undone his belt. His gun and badge were on the floor. He grinned, using his hands to unzip Brett’s pants, then shoved them down. And he wasn’t wearing any underwear! His cock bounced free, looking delicious. Genius arched a brow. “Well, now I feel overdressed.”