Sequel to Watch with Glittering Eyes

Life has been going well for Travis Grayweaver recently. The Grand Council of High Magick hasn’t summoned him for anything. For a witch without a Guild, he’s still getting plenty of work. And best of all, he’s spent the last six months falling more and more in love with his best friend Niko, a rambunctious and playful cat familiar, who happens to love him back.

Tonight, they’ll be celebrating the Yule with lots of candlelight and a feast for two and a festival in town as they honor the start of winter and wait for the sun’s return. Only Niko’s been acting a bit off lately, obviously keeping something from Travis.

Travis is trying to be patient with him, but this thing from Niko’s past might be more than he can handle. Old demons and long-kept secrets will be revealed, but can the love they have for one another endure these revelations during the longest night of the year? 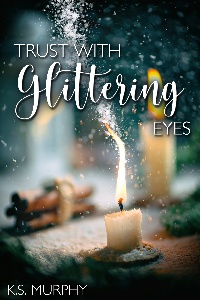 Travis snorted and slid his hands down Niko’s back, cupping his backside and hoisting him up to plop him down on the counter. Landing with a kitten whine in the back of this throat, Niko dissolved into giggles and nuzzled the top of his head to Travis’s chest. Travis took a moment to pet behind those soft ears and then went back to cooking.

Still on the counter, Niko dipped his finger in the jar of cream for their sauce and sucked it off with an exaggerated popping noise. When he went to do it again, Travis slapped his hand away. This earned him a soft hiss and then a wrinkle of Niko’s nose and whiskers when Travis turned with lifted eyebrows.

“Okay, okay, no more cream.” Niko looked at everything set up in the kitchen. All the spices out of the cabinets and pots and pans and cauldrons. “Then what can I do?”

“You can sit there and look pretty.”

“Obviously,” Niko concurred. Travis snickered. “But I’ll be pretty no matter what, so tell me what to do.”

Whether or not Niko phrased it that way intentionally, Travis didn’t know. He did know that it shot through his entire body. Buzzed through him. Tingled in the air. He needed to take a deep breath to keep from pouncing on Niko.

“You can start on the baked apples,” Travis said. “I cored them earlier, so all you have to do is add the filling.”

Niko hopped down from the counter. Said, cheerfully, “I can do that,” and pulled the bowl of apples closer.

“You remember what the filling's made from?"

Niko, clicking his tongue against the back of his teeth, rolled his eyes.

"Yes, Travis," he answered with an indignant lift of his chin. "Three ingredients aren't all that difficult to remember."

"Butter! Top with butter, add water to the pan, bake for thirty minutes. Do you have any other questions for me?"

Smiling to himself, Travis shook his head as he stirred the cream into the pan.

Despite the disgruntled tone in his voice, Niko slid a little closer to where Travis stood. They worked in silence for a while. Travis was rather content with this. With sharing the silence with Niko when they needed no words. Even better than that, Niko’s tail lifted and brushed gently along Travis’s arm. Travis turned his gaze to him, but Niko, still paying attention to what he was doing, simply smiled. Heart skipping a beat as it tended to do whenever Niko smiled like that, like he was the luckiest person in the world, Travis had the urge to drop to his knees, wrap his arms around him, and thank him over and over for loving him.

“So,” Travis said while he worked on their side dishes. Mashed potatoes. Roasted vegetables and pecans. “What’d you do today?”

“Ah ...” Niko hesitated. Then chuckled, awkwardly. Nervous, even. “I told you this morning. Cat stuff. Local gossip. Chatting with other familiars.”

As far as Travis knew, the only other familiar in the area was Penelope, a vixen who lived on the other end of Kings County in the Eastern Woods with a witch named Keiko. Keiko was a renowned alchemist who made potions that people traveled from all over the country to buy.

She and Penelope would be at the festival later but Travis couldn’t really imagine Niko seeking Penelope out. Maybe for a quick meet-up of some kind, but not for an entire day. They didn’t not get along, really. It was more a clash of personalities. A cat and a fox didn’t always make for good company.

Before Travis could ask for any further details, Niko said, “Oh, wait until you see the marketplace. It’s really quite brilliant this year. Lanterns floating in the fountain and the street lamps filled with faery lights and sun sigils in the -- what?” he asked when he noticed Travis staring at him. “Why’re you looking at me like that?”

“You…you saw the marketplace already?” Travis questioned, unable to keep the silly hurt out of his throat. “We always see it together.”

A question sat heavy on Travis’s tongue, coiling around it tight and painful. He badly wanted to ask it -- to ask Niko what he’d really been up to today or what had been bothering him recently or which other familiars, if any, he spoke with earlier -- but it remained there. Stuck. Locked. Afraid to come out into the open. Scared of what the answer might be.