Jack Abbott has forbidden his son, Zeke, to attend the local circus. When Zeke goes against his wishes, Jack must rescue him from the clutches of a world he once escaped, but only at the cost of his lover, Jonas. Returning to the circus brings back nightmares, but Jack learns that Jonas is still alive. Now an opportunity arises for Jack to rescue Jonas as well as Zeke, and to stop the dark dealer at the circus… forever. 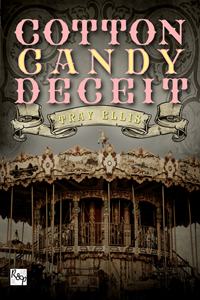 Zeke turned. The teenager in the faded plaid shirt appraised him with fierce eyes. They were about the same height and build, but the comparison stopped there. The young man's hands were roughed and chapped, surely from long hours in the harshest of weather. The cords of his neck hinted at strong shoulders and a back put to hard labor. Zeke worked part-time in the late spring and summer, and he knew how a grueling day of physical labor could leave him sapped. His father's ambition, to have him attend college, meant there'd always been a limit to those exhausting days. This stranger wore a tenacious fatigue in the same way as his plaid shirt, buttoned tight at his neck and wrists.
Zeke grimaced at the swell of unease in his gut. "I tried," he said, feeling his words were as inadequate as his actions had been. "But I don't know why. It'd be a hell of a lot easier to convince them if there was a reason."
"We need to talk, somewhere less obvious," said the young man. "Follow me." Zeke fell into step behind him. The path they traveled took Zeke beyond the zone where visitors were allowed and into the back area of equipment and cages.
The cordoned off section of the field angled distinctly away from the main thoroughfare. Supply cars, living quarters, and other smaller tents barred the general public's view onto the disorderly cluster of necessary materials. Zeke craned his head around to take in everything. Nothing sat weathering out on its own, but had been covered with canvas for protection from possible rain. Beneath the tarps, Zeke noted stacks of pallets, bundles of rope, metal tool boxes, chests stuffed with props, and lumpy bags with colorful silks spilling out at the openings. The animal cages all crowded next to each other in a long row. Closer now than he would have been sitting in the stands, Zeke stared at the animals as he passed.
The monkeys followed him with eyes shining full of the distant, waning sun. Their fur seemed matted and dull. Zeke gave a wide berth to the lion's cage, though the creature hunkered inside was toothless. Inside the next cage were two cramped giraffes, unable to stretch out their necks, and so they had crammed themselves into corners as best as they could. In all, though wild and strange, Zeke felt a certain kindred with the poor, trapped animals.
His father had tried to cage him up for years. The circus had come through numerous times, and never once had Zeke been allowed to go. A strict curfew had kept him inside the house both school nights and weekends. Now eighteen and with college starting in the fall, Zeke wanted to loose the shackles he'd strained under. Unlike these pitiful animals, though, Zeke was in his prime.
The young man stopped at the end of one of the cages. Inside, a donkey clopped its hooves on the floor and made a wheezing sound.
"What's going on?" Zeke demanded at last. "How come you told me not to take the food?"
"This circus isn't what it seems. You have to listen to me—" he began, but the crash of a cage door slamming cut him short. With sudden urgency, he hissed, "Hide! Quick, hide!"