Shaney's curiosity is always getting him into trouble, including stumbling into a ritualistic circle and being imbued with an energy that will eventually tear him apart. He soon finds out that Hudson, a man he cares for deeply, might be responsible for his misfortune. Add in the betrayal by his best friend Todd and the desire of a demented occultist named Silas to control the energy inside of him and there seems to be no way out. Can Shaney find a way to rid his body of the nefarious energy before he dies a horrible death? 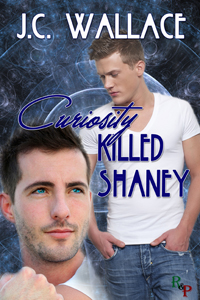 Shaney Mills wasn’t sure if he’d seen what he thought he’d seen, but he definitely wanted to see it again! Nothing, nothing, could have stopped the curiosity that rolled like a warm tide from his chest and tingled straight to his toes. As his GBF (gay best friend), Todd, had consistently warned him, “Curiosity killed the cat.” Well, unlike that ill-fated cat, Shaney’s curiosity hadn’t killed him—yet. And it wasn’t as if he had a choice in the matter. Once curiosity had snagged him, he was its slave to the end; which explained why he was currently slinking around the thrift store (he called it “The Morgue”) in Tupper Lake, NY, where he was ‘volunteering.’
Shaney peered cautiously around the aisle of junk peddled on late night television as items that that no one could live without. Yeah, right, Shaney snorted to himself. With anything but suave subtlety, he looked for his target through the open racks of clothes and tall shelves filled with shoes. Well, tall for him. Yes, he was short for a man. Hell, he was short for a pre-pubescent teenager. And in one of the cruelest twists of fate, at five feet, six inches, Shaney was the shortest of his three siblings—three sisters, actually. Oh, yeah, as if that hadn’t been a wonderful childhood.
He sighed, reminding himself that he’d long ago come to terms with his lack of verticality—sort of. Silently, he slipped around the end of the shelf, moving slow and smooth, like the aforementioned cat. He worked his way toward the first rack of haphazardly piled shoes. He stopped about ten feet from the rack, not daring to get any closer. As he peered through one of the shelves, he caught just a glimpse of his target’s red shirt. The man was rifling through the rack of sweatshirts.
If he could just get a bit closer, get a better look…
Shaney froze as the man—and, oh, what a man he was—walked out from behind that rack of shoes, a black sweatshirt in hand. Maybe if Shaney remained still, he wouldn’t be spotted out there in the open, drooling, because that was what he did when faced with the most gorgeous specimen of man known to humankind. The hunky man’s spiky black hair was longer on top and shorter on the sides. He had a five o’clock shadow at ten a.m., covering a strong jaw with—oh, hell—a dimpled chin and intense crystal blue eyes centered by the straightest, most slender nose ending over mouth-watering lips that were just waiting to be sucked and nibbled. That red T-shirt covered wide shoulders and biceps. Black jeans hugged a slim waist and caressed every single muscle with each confident, I-own-the-world step he took in black work boots. And talk about tall!
Shaney stopped breathing as Mr. Tall, Dark, and Hunky came down his aisle. The man’s blue eyes scanned the store looking for something or…someone?
Me?
Time ceased and the world narrowed as those eyes penetrated straight into Shaney’s soul, connected with his very essence, and awakened Shaney’s cock within his pressed chinos. Those forceful eyes were staring and, wait...frowning, as the man came straight at him! Panic seized Shaney’s body. Oh, fuck! He saw me staring and now he’s going to kill the cat! Damn, Todd for being right! Unable to break from the intensity of that unyielding gaze, Shaney started to scramble backwards with no regard for direction—just away from Mr. Tall, Dark, and Angry. Shaney sprinted in reverse as the man raised his hand and pointed a finger.
“Hey! You!”
Even faced with imminent death, the man’s voice vibrated through every nerve in Shaney’s small frame. If he had to die, let his death be at the hands of this god.
“Stop!”
Every cell in Shaney’s body followed the forceful order, but not before Shaney slammed into the shelf behind him. He gasped, the breath knocked from his lungs. He grasped for anything solid to hold onto as the useless treads of his sneakers slid on the waxed floor. Items rocked on the shelf, some toppling, others just threatening.
This is gonna hurt, Shaney thought and cringed until his hand finally grasped a shelf, and his other hand found purchase as well.
The enormous display shelf settled as Shaney struggled to remain his feet. He closed his eyes, sucking in large quantities of air. His hands vibrated against the steel of the shelf, unyielding in their death grip. The whoosh of blood in his ears cocooned him in silence and he almost forgot about…Shaney’s eyes popped open, and he jumped back in surprise to see Mr. Tall, Dark, and Angry right in his face. And next, as is standard humor in classic Saturday morning cartoons, something heavy fell out of the sky, landed on Shaney’s head, brought him to his knees and then flat on his face. The only thing missing were those annoying little chirpy bluebirds circling his head. He’d have to settle for stars.