Psychologist Dylan Murphy is visiting Edinburgh for the Beltane—May Day—festival and looking for whatever entertainment he can find. When he unexpectedly meets his former lover, Lauryn Campbell, a good witch from Dublin, he is shocked when she tells him they have been brought together to save the May Queen from a potential killer. What they didn’t count on was the great impact of past heartbreak and present sexual attraction as they strive to avert an Edinburgh catastrophe. 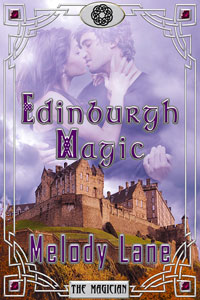 Eric took out his cell phone and made a quick phone call. As they rounded the next corner, he opened the door to Room 12. “I’ll jump into the shower for a few minutes to freshen up. Make yourselves comfortable.”

Dylan and Lauryn went ahead of him as he locked the door behind them. While they stared, Eric kicked off his boots and had his black jeans and t-shirt on the floor in moments. His body was hard and firm, with a cock on its way to being there. As his body moved, Lauryn was mesmerized. It was obvious he was a man who regularly worked out and counted on his good looks for a living.

“My goodness,” she said, as she stared, “if you are on the menu often, you’re probably a millionaire.”

Eric smiled as he turned toward the bathroom. He left the mirrored door open at an angle.

“And I wouldn’t be?” Dylan flexed his biceps.

“You don’t work out like him.” Lauryn pinched the flexed arm, as she watched Eric get into the shower. “I have no idea if he can rival you in the brains department, though.”

Dylan held his head up high. “At least I have something going for myself.”

Lauryn glanced around the small room that looked like a hotel except for the bedside wicker basket containing lube and condoms. She had never been in a hotel like this before. Pulling off the bedspread, she sat down on the edge of the bed. Non-descript carpeting in a blue Berber coated the floor. Matching drapes and bedspread of green and blue checks adorned the windows.

She glanced up toward the bathroom and her mouth dropped open. The angle that Eric left the mirrored door open offered a full view of his nakedness as he washed in the shower. He was spectacular looking, like a large, blond Viking god.

“Come over here, Dylan,” she said softly, patting the bed behind her. Her breathing was coming quicker just watching Eric. He certainly was a handsome man. She scooted back further on the bed as Dylan climbed behind her.

They watched in the mirror as the water poured over Eric’s hot body. He lathered a huge, hard cock, taking his time as he let it slide through his hand. She wondered if Eric knew they were watching. When he turned so they could see it from a side view, she realized he knew. It was planned that way all along.

Dylan pulled her closer as they sat on the bed, pressing himself against her. She hated to admit it felt comfortable being in his arms again. Lifting up her skirt, he ran his hands up and down the silky skin of her inner thighs. Feeling Dylan touch her again was exciting, even without any alcohol involved.