A romantic gay love story full of dogs, confusion, and bribery that almost keep two men, destined to be together, apart.

Duggan is alone again and still living in Thailand in Amnad’s canal-side Thai-style compound with the pack of small, yappy Chinese crested dogs. The dogs drive Duggan to distraction, and when he unexpectedly comes into full possession of them, he seeks to find them new homes after having fulfilled Amnad’s dream of taking one or more of them to the winners’ circle at an international dog show.

Young Australian plastics manufacturer and dog show judge, Jason Fielding, appears in Bangkok to both make a business deal with Duggan’s company and to judge an international dog show. Although both men are coming off painfully broken relationships, when they meet they have an immediate attraction to each other. The chance they will ever find each other sexually, though, is seriously challenged by misunderstandings and the sexual maze of attempted bribery by a gaggle of grasping Thai pedigree dog owners hoping to influence Jason’s dog judging decisions. 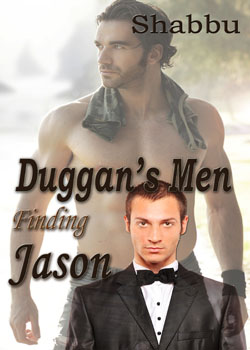 When I arrived home I was feeling lonely and mildly depressed especially as I arrived at a lifeless house that was too big for me. I needed more. More sex and more company and more affection. I’d have liked to lie there cupping or being cupped up against one of the men for a while, then to have done it again slowly, or gone to the shower together and done it there as we washed each other. The things I had enjoyed, when I had been in what had, at least at the start, been the good, healthy sex-filled relationship with Shawn.

When Shawn hadn’t been around there had always been our dogs for company. They had been such a huge part of our life together and my life before Shawn. Now I had no Shawn and no dogs. I was living in a rented house that was too big because I had been sure that at the hearing I’d at least get some of my beloved dog’s back. And if any of them had been ones I had owned before Shawn I might have but we had been together too long. So, I was sitting at home alone feeling very sorry for myself. I sulked, drank half a bottle of red wine, and went to bed much too late. Fortunately, I remembered to set my alarm.

In the morning I had a headache. I also had trouble getting out of bed and was still feeling sorry for myself. Unfortunately, it was Saturday and I had to do the hour and a half drive to Newcastle to judge a dog show at the Hillsborough dog grounds. I had to be there by 8:00 a.m. I groaned and complained out loud as I staggered into the bathroom and showered and dressed in a suit and tie and headed off. Fortunately, the traffic on the F3 freeway was light and I pushed a bit above the speed limit most of the way, so I wandered into the hospitably room at 8:05 a.m. As happened nowadays at the few dog shows I attended, the other judges and the officials seemed to be avoiding me.

Shawn was having a great year in the dog show ring, doing every show he possibly could and setting a record with the number of best-in-group and best-in-show wins he was taking, with what had been my dogs. He was a star, and I was just—well, I am not sure what I now was on the dog scene. A nobody, I supposed. And I knew they all knew everything about our split. About the broken nose I had given Shawn, and him getting the dogs in the custody hearing, and me making a fool of myself. I got a cup of tea and found my ring steward, Carol, and we sat down and went over the judge’s book together.

“Sorry about your dogs, Jason,” she said. “Whatever went on, he had no right to get them. You and your mother both put your lives into Bellamaison kennels. Shawn may be a great groomer but—”

“And I’d have done more than break his nose if I’d come home and found him taking my dogs out of my yard, I can tell you,” she added fiercely.

Having known Carol almost all my life, I knew that she would have done that. She would have taken to him with a baseball bat probably. There were rumors about her anger and no one ever dared to cross Carol.

“Here?” I went red. Shawn would know I was judging, and he had come anyway.

Enslaved by a Trailblazer (MM)
Anitra Lynn McLeod
In Shelf
$2.99
Tweets by
sirenbookstrand