Flowers for Tokyo: A Single Title from Dreams & Desires, vol. 4

Andre is pissed. Once again, his long-time lover has put his celebrity chef obligation ahead of their relationship. No mater how posh it is or how many lush bouquets adorn it, an empty apartment is still empty. Tired of being left behind, Andre flees their home for the bars and a night of club hopping with an old, debauched friend.

Frightened Andre is mad enough not to forgive him this time, and worried he might backslide into some old, bad habits, Jarrod resolves to find him, bring him home and make amends. But is there enough bling in the universe to change Andre's mind about keeping their personal life and Jarrod's professional one separate?

This is part of the anthology Dreams & Desires v. 4. All net proceeds from the sales of this story individually or in the anthology benefit A Window Between Worlds, a non-profit organization that provides art supplies and training for art as a healing tool free of charge to battered women's shelters. 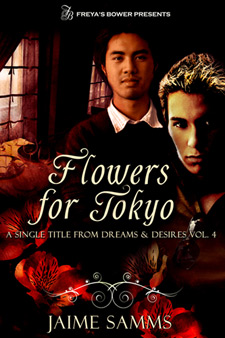 Flowers for Tokyo: A Single Title from Dreams & Desires, vol. 4

Flowers for Tokyo: A Single Title from Dreams & Desires, vol. 4
Jaime Samms
In Shelf
$1.99
All Books In Cart
All Books In Bookshelf
Excerpt

Jarrod stood in the puddle, his mouth hanging open, his chest tight, and the rest of him in tatters.

The elegant apartment answered with the echo of the slammed door.

He’d come home on a high, bearing flowers and other, more important gifts, eager to see his lover after three weeks of phone sex and missing him like crazy. He hadn’t expected this. Even from volatile Andre, this was extreme.

Sighing, he pulled out his cell and pressed speed dial. “Hey, Martin.”

A low chuckled greeted him. “Shouldn’t you be in bed blowing your boyfriend’s mind?”

“You would think so.”

Jarrod stepped gingerly out of the water and reached for the mop cupboard. “To be honest, I’m not sure. Your beloved brother just had a major blow out. I thought I’d give you a head’s up. He’s probably going to be knocking on your door within the hour.”

“What happened?” Martin was already settling in for a long therapy session.

“I brought flowers. I started to tell him about the Tokyo deal, explain everything you and I talked about. You know, ask him, and he flipped out. I didn’t even get to the important bits.”

“You’re a dense little thing, aren’t you?” Unlike his twin, Martin had a cool head and a knack for seeing right through to the heart of things. “You’re gone three weeks, back three hours, and you start by telling him you’re going to have to leave again? Do you ever pay attention to anything, Jerry?”

Jarrod groaned. Only Martin, his friend from before time, and his business partner, could get away with calling him that. “I didn’t even get a chance to say more than we got the deal. I thought he’d be happy. It means we can move anywhere he wants. He’s never liked this place.”

“He doesn’t like it because it’s big, and airy, and empty. He hates it because you’re never in it.”

“What am I supposed to do? He wanted this lifestyle, too.” 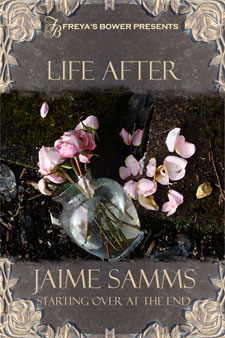 Life After
Jaime Samms
In Shelf
$1.99