Four Weddings and A Scandal!

Romance is definitely in the air, as we take the plunge into the sea of matrimony. Get swept up in the excitement, as five very different couples prepare to tie the knot. Not all is as it seems, however, some nasty surprises bring heartache and uncertainty. Will everyone get the happy ending they deserve? 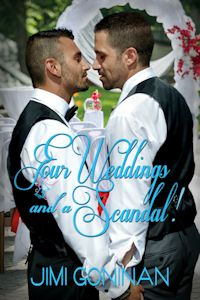 Four Weddings and A Scandal!

Torquil MacBeth drummed his thick, masculine fingers in a nervous fashion on the white linen covering of the bridal table. His stomach churned slightly, as he gazed out at the crowd on the rooftop terrace of the Grand Babylon Hotel. A light, pleasant spring breeze began to ruffle the pieces of white paper before him, causing Torquil to quickly place his right hand upon them, to prevent them from taking flight. He’d be completely lost without them, as the pages contained the speech he was scheduled to give in a little over fifteen minutes. Public speaking was unquestionably one of his least favorite things in the world, but as the best man for the wedding of his brother, Hamish, it wasn’t like he had much of a choice.

Why did I agree to this? I need to man up and stop stressing. Besides Mom and Dad will kill me if I don’t.

As a firefighter, he’d enthusiastically rushed into burning buildings on a number of occasions without half the amount of trepidation he felt at addressing an expectant crowd. In search of a distraction, Torquil focused his attention onto the several good-looking waiters wandering about the spacious terrace; in particular, the way their cropped black jackets drew attention to the pert little asses beneath.

Feeling a familiar tingling in his loins, Torquil switched his attention back to the happy couple, lest his kilt begin to betray his lustful thoughts…his manhood wasn’t terribly easy to hide when it hardened to its full nine inches.

Despite his Scottish heritage, Torquil wasn’t as blue-white as some of his relatives but was still pale by a normal beachgoer standard. Even so, his fair complexion didn’t stop him from attempting to sun himself at Murdoch Beach at every opportunity, taking great care to slather himself in cream to avoid ending up looking like a lobster. Like his brothers, Torquil was of a tall stature, topped with strawberry blond locks that tended towards a deeper auburn in their facial hair, although Torquil was the only one of the three to have a full beard.

Most aspects of Hamish’s wedding to his childhood sweetheart, Fiona, had followed custom, primarily to please their elder relations. Both families hailed from Scotland, but had moved to Port Davinica after the Second World War; and carried their traditions with them across the seas. The kilts they were all sporting, for example, were in the MacBeth family colors – red, green and blue, with lines of yellow. Also in homage to the clan, the men were all wearing a sporran on a silver chain, knee-high white socks, white crisp dress shirts and tailored black jackets.

Even though Torquil had enjoyed the ceremony – apart from the bagpiper, which had sounded like the plaintive wails of a dying tone-deaf cat – he had long ago resigned himself to not being of the marrying kind. Not that there hadn’t been one or two potential candidates over the years but it had always ended in heartbreak. These days, the prospect of getting his needs met by an array of talented men held infinitely more appeal than settling down with just the one.

Looking down at his watch, Torquil noted that it was almost time for the speeches, meaning that he needed to go and fetch the special bottles of champagne he’d dropped off with the event coordinator earlier in the evening. Standing up, Torquil shoved the pages of his speech into his sporran and strode purposefully across the terrace.

Pity I can’t drink an entire bottle to myself before the speech. Enough time for that later. Besides, nobody likes a sloppy, drunk speaker.