After more than a decade of marriage it comes down to honest exploration. Two of his fantasies, two of hers. Four games total before they're all done. What starts as common fodder for sexual fantasy escalates with each scenario as Brett and Alexandra delve deeper into their urges. Each game grows more intense until they wonder if they are pushing the limits of their marriage.

Ultimately, the question for Brett and Alexandra is this: Will their games put a wedge between them forever or bring them even closer together? 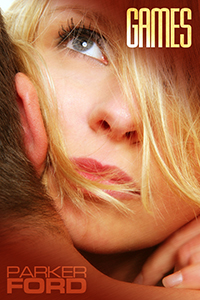 McClaren’s was a hole in the wall in the city. After all the races Brett would run, they’d join his rag-tag bunch of running friends for beers there. There was something to be said for its dirty uncouth charm after racing through the streets of the city in a rush of runners and color and noise. The inside felt like an alcohol-filled womb to Alex and her eyes, nervous and seeking, darted from person to person, table to table and group to group. The music was loud, Motown followed by Irish folksongs followed by Hair Metal. No rhyme or reason, but somehow it fit the image of the bar itself.

“You okay?” Brett asked. His hand found the small of her waist, sliding along the back of her short blue skirt he loved so much. He darted his fingers under the hem and stroked her bare leg sending a tingle, much akin to fear, up her thigh to her pussy.

Alexandra nodded but it felt like something was lodged in her throat, and something equally big was crushing her heart in her chest.

“You sure?” Brett asked, kissing her temple. He held up two fingers for the bartender and pointed at the tap for the draft of the night.

She didn’t want beer. She wanted whiskey. A bottle of it. Anything to calm the wild rat on a wheel feeling in her chest. But between her legs beat an entirely different kind of pulse. That one was not fear-based but lust-based. Fantasy laden, heady, steady thumping of a need for sex and risk and the unexpected.

He pulled her close and she could tell he was scoping out the bar itself, finding the exits like he was a bank robber or a getaway driver. Brett’s pulse was visible at his throat and Alex wanted to lean in and kiss him there, suck the skin over his pulse like she was sucking a lollipop. Was he as over the top scared as she was? Was his body light and heavy and pounding with adrenaline like hers?

And would they really do it? That was the sixty-four thousand dollar question. Would they?

Somewhere in her, she believed they would.

“Are we walking around or sneaking out the back?” Brett said, almost to himself.

She squeezed his hand. “If we go down that back hall and past the restrooms, there’s the alley,” she whispered to her coconspirator in crime. Possibly a crime against themselves, against each other.

We’re doing this together and we are the only two players. Breathe you dimwit . . .

“Good girl,” Brett said, his lips pressed to her hair. “You’re so fucking smart. I want to put my hands under that skirt and get you off right here, in this crush of drunken people and college kids and locals. I want to fuck you with my fingers until you clutch that bar and beg me to take you.” He said all of this into her ear, his breath hot, his voice soft.

Alexandra felt her knees sag a bit. His dirty confession was completely unexpected. A breathtaking blindside that made her feel that at any moment her ligaments and muscles would give up the ghost and she would fall.

He handed her a beer, grinning. “Drink up.” He tipped his cold beer mug to hers and she shivered at his mouth on the rim. His mouth always did weird things to her insides if she let herself watch him.

Brett kissed her lips and said into her ear, so only she could hear. “And back alley blow jobs and my gorgeous little whore of a wife.”