Heidi finally leaves her abusive husband after several years of unhappiness. She moves back to Creek Valley to be with her friend, Landon. However, she can’t be with Landon because he’s in a serious relationship with Gavin.

Gavin is a Dom and he doesn’t like to share. When his lover tells him about Heidi and her submissive side he’s intrigued by her, but he can live without a woman in his life, as long as Landon is with him.

From the moment all three meet up the chemistry between them sizzles. Gavin sees Heidi’s submissive side and her fear of him. When all of her protective walls break down, neither of them are prepared for Landon’s decision. How can someone choose between the two people he loves?

Can Landon fix what he has broken? And can Gavin handle having two submissives under his care?

Heat Rating: Sextreme
Word Count: 30,760
14 Ratings (4.4)
BDSM Menage a Trois/Quatre Rubenesque
In Bookshelf
In Cart
In Wish List
Available formats
Mobi
PDF
HTML
ePub
Cover Art by Sour Cherry Designs
Reviews
Amazing read but nothing is better than hot cowboys! Fell in love with Gavin of course ;)
Kathryn Laprade
I’m a fan of this publisher, but the author is someone that I’ve not read in the past. Considering there’s quite a few of her books through this publisher I decided to take a chance on this story; it doesn’t hurt that I’m a fan of the category and it’s a relatively quick read. This is the first in the Creek Valley series where ménage and the like are not uncommon.

Fresh out of a marriage with an abusive husband, Heidi is finally free to pursue some measure of happiness. Deciding to move back to her hometown of Creek Valley where she felt comfortable and safe Heidi temporarily moves in with her childhood friend Landon and his lover/Dom, Gavin. Although Heidi has been away for ten years, Landon has been a faithful friend and kept in touch with her over time. It doesn’t hurt that he’s always had a thing for her. Can these three make a go of things or will past actions, hurtful words and Heidi’s ex put a stop to their happiness?

Heidi is a full figured woman who despite the ending result of her previous marriage is an admitted submissive. Regardless of the non-excusable verbal and physical abuse she suffered in her marriage she admittedly enjoyed the dominance of her husband – telling her what to do, what to wear kind of thing. So it wasn’t a shock that she didn’t blink an eye when Landon confessed to the D/s lifestyle that he prefers with Gavin. She did have problems dealing with the budding relationship between the three of them but they were more self-directed about what she could offer the guys. I did have a problem with was the timing of everything and a couple other things – but before I get ahead of myself I’ll tell you some of the good stuff

Landon is a relatively nice guy, he’s always always had a thing for Heidi and during his time with Gavin he’s always let it be known that he still loves her and if he ever gets the chance with her he’ll take it. I thought that was an honest approach and I appreciated that the author didn’t have Heidi and Landon re-meet and then have the miraculous, can’t live without each other falling in love. There were moments that I wanted to bash Landon’s head in but in the end he prevailed and my likability of him was restored.

Gavin, the Dom in the relationship came across a little…I don’t know…spoiled and temperamental is all I can think of. There’s a sensitive moment between he and Landon that I couldn’t believe his reaction as a grown ass man and a Dom no less. But that’s okay because I don’t have to like them all the time, right?

Here’s what I wasn’t so keen on – Gavin’s quick concession to a relationship with Heidi. He’d met her less that one day when that happened. And even though he grew up in the same town he didn’t remember Heidi so why so soon – because of Landon? No way – I’m gonna need more convincing than that. Another bother for me was a sex scene when Heidi noticed that Gavin’s not wearing a condom and ‘she scared to ask him why and what it actually meant’. COME on, seriously she’s that big of a doormat she’s not concern with the High V, STDs or pregnancy. That’s just dumb.

Don’t take my small rant to mean I didn’t like it because I liked it enough to want to read the next story in the series as I thought this was a nice introduction. If you’re a fan of Oaks Bliss series this might tickle your fancy.

“There, bossy. All finished.” She handed him the bowl. They walked together to the sink. He washed the bowl while she dried it and then placed the bowl with the others on the far side. Landon admired her ass. The full curves would look gorgeous in one of the red thongs he’d brought her.

Gavin’s orders came back to him. Following behind her, Landon pressed her against the fridge. The smile on her lips fell.

“What’s the matter?” she asked. She licked her lips, and taking things slow went out of the window. Landon wanted her, and waiting for her to get on the same thought process was no longer acceptable.

“I need to do something.”

He leaned in close. Heidi pressed a hand against his lips stopping him from taking what he wanted.

Taking hold of her hand, Landon pressed it against the fridge. “Trust me, Heidi. I’d never hurt you, but there is something I’ve wanted to do for some time. I need to know if you taste as good as you look.”

Before she got a chance to protest, Landon slammed his lips down on hers. The plump flesh opened up to his onslaught. He plunged his tongue between her lips relishing the taste of her. Running his hands up and down her body, Landon caught her to him. All of his dreams were being answered in that one simple kiss.

She moaned, wrapping her arms around his neck. Heidi pressed against him, and any chance of holding back was lost.

“Yes, we can. I want this, Heidi, and so do you.” He brushed her lips with his again. Touching wasn’t enough. Landon started to unbutton her blouse. He stroked her rounded stomach, moving the blouse out of the way to cup one of her full mounds. Her nipple pressed against his palm.

Heidi pushed him away. Her shirt was open with only the top button fastened. “What about Gavin?” she asked.

“If only you knew.” Landon lifted her onto the counter. “I’ve waited too fucking long to have you in my life. Derek’s a fucking idiot. The moment you told me about your divorce I was so happy. You’re mine.”

Laughing, he cupped her face, staring into her eyes. The love he felt for her was reflected in his gaze, or at least he hoped it was.

“This is crazy. I can’t come between you two.”

Opening her thighs, Landon stepped between them. “You’ve got no idea what we’ve got planned.”

He ran his thumb over her bottom lip watching her gasp.

“What part of ‘take it slow’, didn’t you understand?” Gavin said. 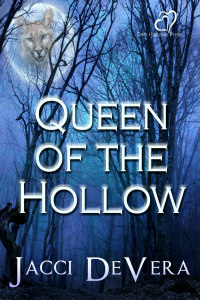 Queen of the Hollow
Jacci DeVera
In Shelf
$0.99

My Kind of Dirty (MF)
Sam Crescent
In Shelf
$3.99
Tweets by
sirenbookstrand