Going up the Inside

When Javier and Glen’s racing teams are thrown into turmoil and their living arrangements become challenging, they struggle to handle their new situations. Javier throws himself into his work, Glen into his social life, but will their actions push them apart or bring them back together? 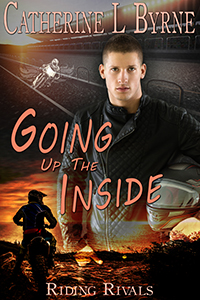 Going up the Inside 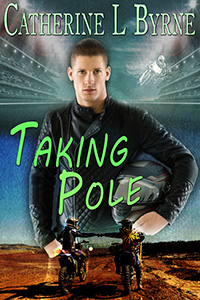 With a sigh of relief, Glen trudged up the steps to the front door of the Barcelona apartment and unlocked it. The door hit something, however, and he peered round it to see a pair of muddy boots wedged between it and the wall, so he pushed them out of the way with his foot and sidled through the gap.

“I’m in the bedroom!” replied the faint voice of Javier, who also sounded like he was laughing.

“I’ll be there in a minute.” Glen picked his way to the sink past the pile of dirty rags used for cleaning bikes, the bags of glass bottles and cans to be recycled, and the heap of random unwashed clothes. The sink was filled with dirty plates, cups and cutlery—a waft of rotting food hit his nostrils and he put his hand over his nose, opening the cupboard to the left to see a solitary clean mug. “Thank god for that!” He filled it with cold water from the tap and gulped it down. It had been a long couple of days at the Yamaha headquarters, and the flight back to Spain had been tiring and hot.

After setting the cup down on the kitchen table, which was covered in piles of paperwork and some oily spanners, screwdrivers and the socket set, he walked into the hall past a mountain of bike magazines towards the bedroom.

Javier lay sprawled naked on the satin sheets of the bed and raised his eyebrows as Glen ambled in.

“Did you miss me?” Glen asked, lifting his t-shirt over his head slowly to show off his muscles. He was rewarded with a whistle from Javier. In the four months since the last race of the previous season, they had been living in the Barcelona apartment together. Or at least, together when they weren’t with their Yamaha or Suzuki teams testing their bikes over the winter off season with no racing. Or attending meetings with their teams, their physiotherapists, or doing the endless physical training needed to keep fit enough to ride the high powered machines.

“No, I love staying here getting lonely without you.”

“Cheeky!” Glen wriggled out of his jeans. “Oh, that’s better.” He rearranged his balls. “Get some air to them, at last.”

“You have my attention.” Javier pointed to his own cock, sticking up like a flagpole out of the triangle of thick dark hair at the top of his thighs.

Glen eyed it for a second, then sprang forwards and pounced onto the bed, landing over Javier but supporting himself on his knees and knuckles. He growled in Javier’s face, then smiled, and Javier kissed him, grabbing his cock and making him groan.

“I’ve got everything ready.” Javier indicated the bedside table, where condoms and lube lay surrounded by wine and vineyard magazines.

“What a hero.” They kissed each other desperately. Glen had missed the taste of him and pushed his tongue as deep as he could into Javier’s mouth without choking him. These rare occasions when they could be together without interruptions were so precious they spent most of their time making mad, passionate love to each other. Being in their own bed was a treat—otherwise it was sneaky sessions in one of their team trailers at a bike testing session.

Frenziedly, they kissed and fingered and lubed each other, then Glen pushed inside him. They moved together in the best way, their natural way, pressed skin to skin.

There was a bang on the front door, followed by another a few minutes later, and shouted requests. “Come out and talk to us! Come and sign my t-shirt!”

“Not the fans again,” whispered Javier, clutching at Glen’s muscly arse and bringing him in deeper. They continued despite the noises from outside, Glen slowing then speeding up, driving himself crazy and enjoying the sight of Javier’s usually immaculate black hair all messed up and sweaty and his closed eyes and mouth wide open panting for breath. He paused to kiss and suckle on his neck, making Javier shout and tighten, then continued thrusting into him.

The knocks on the door grew louder and the shouts clearer. “Oh fuck off,” mumbled Glen. Why can’t they give us a bit of peace for once? That gate into the courtyard isn’t enough to keep them out—we need to move somewhere private.

“Ignore them,” gasped Javier as Glen thrust more urgently into him, feeling Javier’s legs around his back. And then release as his love spurted into the hot tightness of Javier, drawing them even closer together. The orgasm throbbed through him like an engine revving, like the pulses of a throttle, so hard that he almost didn’t realise Javier had come between them, splattering on his stomach and chest like molten, sticky rain.

They lay next to each other panting for a while, holding hands, hot and sticky and sweaty.

“I shall have to go away more often,” said Glen at last.

“Have you not done the shopping?”

“I thought we agreed—the one who’s at home does the shopping.”