More From The Beach Boys

But Seth’s mind wasn’t on the glorious weather or the golfers. He had something else that was tugging at his mind. “When did you get your Prince Albert and what made you decide to do it?” he asked.

Craig had a moment of uncertainty, wondering if Seth didn’t like it. But that was ridiculous. Seth had made it very clear in bed that he did like it. However, they hadn’t been together very long yet, and he had to ask.

Seth patted his shoulder. “Hell no. I like it. It’s just that since we’re going to be here for a while unless those people up ahead develop genuine golfing skills really fast, I thought I’d ask. I expect there’s a story behind it.”

“There’s not a story, really. I suppose it’s more a sign of me accepting myself.” Once again he stopped. Craig hadn’t really explained it to himself before, far less to another person, and he wanted to do it properly. Seth was becoming increasingly important to him, and he wanted to be sure he was always honest and truthful with his lover, even when he had to decide what the answer really was for himself first.

“There’s no rush. Take your time.”

Craig grinned at Seth. That was another thing he loved about the man. Seth always seemed to understand him. He was caring and patient, never pressuring Craig. Well, except in bed. They both always seemed to be in a hurry to fuck.

“I need to go back a long way, more than ten years. I always knew I was more interested in men than women, but I hadn’t really categorized myself as gay yet. I suppose I thought it might be a passing stage, or that maybe I was going to be bisexual.”

Seth was watching him, smiling and nodding, accepting him as a person. Craig had the distinct impression that Seth always would accept him, no matter what he said.

“One evening a group of my friends and I all went to a gay bar. For most of them, I think it was kind of curiosity. They wanted to look at the people there and…I don’t know. Not understand them, precisely, but maybe something along those lines. See where they were coming from, perhaps?”

“I do understand what you mean. I was like that the first time I went to a gay bar myself. It was more than mere curiosity. It was almost as if I wanted to see if I belonged there,” said Seth.

Craig smiled at Seth and wished he could hug him. Likely no one would complain, but they were out on an open golf course and there were kids around so likely it wouldn’t be a good idea.

“That’s it exactly. I did feel at home there, although not at first. I was surprised by the rampant sexuality. Men were blatantly kissing and hugging, even touching each other, and it opened my mind and my eyes. Of course it only took me about five minutes to realize that men kissed and hugged and touched women all the time in every other bar I’d ever been to. But it was just the difference of seeing two men doing it.”

“And then you realized you wanted to do some kissing and hugging and touching yourself?” asked Seth.

“Hell yes. I’d like to do some right now.” Craig stopped and took a deep breath. Getting arrested wasn’t part of his plan for this vacation.

“But how did that lead to the piercing?”

Seth laughed and stood up. The four men ahead of them had finally finished playing the hole and moved on.

As they walked across the grassy slope, Craig said, “I looked around at tattoos and piercings, but I teach high school, as you know. I really wanted something that was my secret. Something that was truly mine. Oh, sure, lovers would know about it. Even other men in the school bathroom maybe. But I didn’t want something like an arm tattoo that everyone in the street would know about. I thought for a long time before I made my decision and I’m still very happy with it.”

This time Craig did give Seth a quick hug. Damn, he loved that man so much already. They were incredibly well suited to each other. It was amazing how perfectly their thoughts, hopes, plans, and ideas meshed, even after such a short time together. Craig was really looking forward to getting to know Seth better and better as time passed.

“What about you? Have you ever thought of getting a tattoo or a piercing?”

Seth put his ball on the tee, ready to take his shot. “Like you, I don’t really want something everyone can see. I like to wear short-sleeved shirts for work in summer. As you would know from my tan, I don’t wear much clothing in the hottest weather at all. So no matter where I got the tattoo, people would be able to see it. I’m not really into jewelry, so an ear piercing, or an eyebrow ring, or a nose stud, isn’t really me either.”

Seth’s shot was good, bouncing and landing on the green near the next hole.

Craig concentrated on doing his best, but he must have been distracted by thinking about Seth, because his ball landed right on the very edge of the green. “Damn.”

“You’ll just have to admit I’m a better golfer than you,” Seth teased him.

“That’s not hard.” As soon as he said it, Craig cock stretched and grew. Damn. He couldn’t even play golf without wanting to fuck Seth.

“I’m staying in a cottage at Two Waters. Come home with me. I want to fuck you so bad.”

“I want that, too,” replied Seth, jumping up and shaking the sand off his towel. He slid his feet into canvas shoes and watched while Craig grabbed his towel, hat, and sunscreen, then the two of them walked companionably back down the beach.

The cottage Craig had rented was a small clapboard place only a few hundred yards from the beach and a similar distance from the golf course. It had a large living area with a tiny functional kitchen, and two smallish bedrooms with a bathroom between them.

Craig had put his gear in the bedroom facing the garden, which was a low maintenance but pleasantly green view of grass, trees, and shrubs. The bed was large and soft, the color scheme a beach-toned one of golden browns with touches of blue.

Seth followed Craig’s lead and dropped his towel on the kitchen table, then they walked straight into the bathroom.

“First a shower, I think, to get the sand off,” Craig said huskily.

Seth stepped out of his canvas shoes and dropped his swimwear. His cock bounced out, long and thick and standing up begging for attention.

“God, I want that.” Craig slid to his knees and sucked Seth’s cock deep into his mouth. He rolled his tongue over the head, then scraped his teeth lightly along the vein.

Seth grabbed Craig’s shoulders to hang on, his legs suddenly weak with need.

Craig rolled Seth’s balls in one hand while sucking Seth’s cock in again, as deeply as he could, waiting for the head to hit the back of his throat, before letting it slide partway out again and running his tongue along the ridge under the head.

As Craig sucked and licked and nibbled his cock, Seth clutched Craig’s shoulders hard, desire rolling through him like a thunderstorm. He could feel his balls drawing up tight and knew he couldn’t last long. But Craig’s mouth felt so good.

Craig sucked strongly to get the last bit of essence before standing and pulling Seth into his arms for a harsh kiss. “Taste yourself. You’re delicious.”

Craig turned the faucet on in the shower and grabbed lube and condoms out of a drawer.

While the water heated, Seth leaned into Craig, rubbing his hands over Craig’s shoulders and arms, loving the feel of the muscles and washboard abs. He let his hand slide lower and lower, teasing Craig’s cock, running his fingers through the nest of brown curls, and then sliding a fingernail up the cock to tug gently on the barbell piercing. “I can’t wait to feel that inside me. I bet it makes everything ten times more exciting.”

“I can’t wait to be in you any longer.” Craig grunted, pushing Seth into the shower. Seth leaned against the wall, crossing his arms and resting his head on them, his legs spread wide apart.

Craig squirted a dollop of lube into Seth’s ass, and then ran two fingers around inside against the walls. “God, man, you’re hot.”

Seth heard the snap of latex, and only moments later he felt the head of Craig’s cock at his sphincter. Again he widened his stance, breathing out as the cock, complete with its jewelry, popped inside. “Feels so good.”

Craig grabbed Seth’s hips, holding tight as he pushed farther inside. Farther and farther until his balls slapped against the other man’s thighs. “God, so hot, so tight, so very good.”

Seth pressed back into Craig, rubbing his back across Craig’s nipples and seeking to take every inch of Craig in his ass. “Shit, yeah,” he murmured.

Slowly Craig withdrew, pulling almost all the way out, making sure his Prince Albert scraped against Seth’s walls. Then he pushed in again, oh-so slowly. Then out and in again. Out and in, a little harder and a little faster.

Soon he was pounding into Seth, balls slapping on thighs, hands gripping hips with punishing force.

Seth’s right hand was on his cock, rubbing and pulling and twisting. “Shit, man. Feels so good. So very good.” 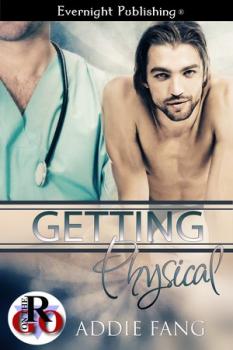 Something Unexpected (MM)
AJ Jarrett
In Shelf
$2.99
Tweets by
sirenbookstrand