Several years after the third World War, resources are scarce. The poor are poorer and the middle class doesn't exist anymore. A man with resources travels from city to town buying teenagers from desperate parents and orphanages. The teens are educated, fed and clothed as appropriate for their end purpose, Soldier or Breeder.

A strong, young woman, Marie Rice, falls for Gunnar Lincoln. Their attraction is forbidden, Marie meant for someone else. Disturbing events on the island lead to Gunnar and Marie looking for a way to escape and save everyone else. While they bide their time, attraction turns to something stronger. Will they escape? Will they save the others? 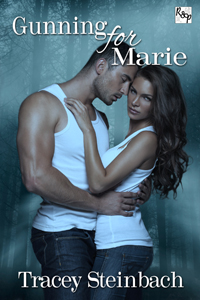 SHE RAN. She ran for her life. Her burning lungs fought for the air she sucked in gulps. The soles of her feet were raw and bloody from running barefoot across the rocks and twigs of the woods. She dodged standing trees and smashed through bramble, fighting her way through the island’s interior. Her toes didn’t touch with the mud caked between her toes. Elysa barely noticed, though. Adrenaline and ice-cold terror kept her legs moving. She shouldn’t have been out of bed, let alone running. It had been a day since she’d miscarried for the second time. The first time, she’d been coddled and pampered, made to feel like a princess. Not this time. A second miscarriage was a death sentence. Resources weren’t to be wasted on someone of no use to him.

I gotta stop, for one minute, to catch my breath. No.
Keep going!
Elysa’s once white nightgown whipped around her legs, torn and filthy. Sweat made the fabric almost transparent in places, but modesty was the last thing on her mind. When she snuck out of the hospital, she hadn’t anticipated running for hours in the woods, though she should have. She should have known once the nurses reported her missing, he would send the teams after her.

The moon hung high in the sky, and Elysa guessed it was near midnight. Trees provided a canopy above her, blocking the light. She could barely see where she went but Elysa pushed on. It hadn’t entered her mind then but now she realized how easy her escape had been. The only reason for that would be so they could hunt her.

Elysa wouldn’t know if anyone was catching up or not. She wouldn’t know unless she came face to face with someone. They’d been trained for silent movement, fighting, killing. Would she see her death coming? Prayers from her childhood played a mantra in her head. She had no way of knowing which team, Riolsh or Nyamos, chased after her. Maybe they both were.

Exhaustion made her clumsy. She tripped and stumbled, bloodying her knees. She tried to use the tattered ends of her nightgown to wipe away the fluid as she ran. They could track the blood if it hit the ground. The blood from her injured feet went unnoticed.

The trees thickened ahead of Elysa. The sweat-soaked ends of her hair slapped her face as she whipped her head back and forth, debating whether she should go left or right. She shot right, hoping she could find a place to hide and rest.

Minutes-- who knew how many-- flew by as she raced through the trees. Elysa crossed a small stream, not bothering to stop for a drink even though her thirst was great. She followed the stream’s flow, hoping to find a lake or a pond or maybe the ocean. She knew they lived on an island called, CACAJT. No one knew exactly what the letters stood for. The ground sloped down where the stream curved. The more she ran along the water, the more tempted she was to stop for a drink. Her panting breaths were making her mouth dryer by the second. Swallowing grew more painful.

Under cover of a group of trees, Elysa stopped at the side of the stream. She dropped to her knees and cupped her hands in the clear water to drink greedily before splashing water against her overheated skin. She filled her hands again, drinking more. Her leg muscles felt like Jell-O and threatened to seize from the exertion.

A twig snapped. A hawk circled. She stood and started running again. Her heart pounded so hard it threatened to burst from her chest. Elysa ran until she found a cave, hidden in the side of a hill. It was small and cramped but if she curled into a ball, she’d fit.

When Elysa had turned sixteen, she’d been in numerous beauty pageants and won most of them. Her mother crowed at the top of her lungs about her daughter who would someday make her rich because of her looks. She’d be a model, or a movie star. Maybe she’d marry a famous athlete or CEO of some Fortune 500 company.

A man came to the house one day and told her mother he could make Elysa famous. He would pay her mother big money if she would sign over custody. Elysa’s mother signed right on the dotted line, not batting an eye. The same day, Elysa’s bags were packed and she boarded an airplane—her first plane ride and her mother hadn’t bothered to see her off. She gave a cursory hug to Elysa before she walked out of their front door but that was for show and no other reason.

How could a mother give her child away to some stranger?

The first two years on the island, Elysa was provided for. They fed and clothed her and gave her a place to live. They educated Elysa in the ways of hygiene, child care, reading, writing and basic math. Other girls, all of them beautiful, shared her classroom. Later, after she turned eighteen, she found out the females of the class had a name, Breeders. They were the beautiful girls, too delicate for combat training, too weak for fighting. There would be no leaving the island, no rich husbands, and no more beauty contests. The girls’ sole purpose was to get pregnant and deliver the next generation of beauties or soldiers.

Elysa dozed off in the cave, exhaustion a physical pull she couldn’t fight anymore.

Marie arrived in the cafeteria, last for supper. She filled her tray and sat down all by herself. Elysa knew the hour grew late and the workers would want to clean up. She wouldn’t even have been there but she’d stayed in bed a big part of the day, not feeling well. She watched Marie for a few minutes, gathering her courage. Breeders and soldiers rarely socialized. Feeling brave, Elysa got up with her tray and walked to where Marie was sitting. “Would it be okay if I sat with you?”

Marie looked over her shoulder, a wrinkle in her brow. “I’m sorry. Did you say something?”

“I asked if it would be okay if I sat with you. We’re the only two in here and the crew would like to start cleaning up.” Elyse gave her a friendly smile.

Marie shrugged. “Okay by me. Have a seat.” She went back to eating. “My name’s Elysa.” She said.
“Marie. Nice to meet you, Elysa.”
They ate their meals while the kitchen crew came out to clean the cafeteria. Elysa tried to draw Marie into conversation a couple of times but after the short, flat answers, she gave up. Marie was a warrior, the warrior, on the island besides Tyson.

When their trays were empty, Elysa stood up and reached for Marie’s. “I’ll take them up. You’re probably tired.”

Terrible pain ripped through Elysa’s abdomen. She dropped the trays on the floor with a crash and bent over, panting. Her eyes watered. Marie jumped up from her seat and climbed over the table to stand beside her. “What’s wrong?”

“I’m fine. It’s nothing. It’ll pass in a moment,” Elysa ground out. She prayed she hadn’t lied and the feeling would pass. She’d eaten too quickly, she told herself.

“Are you sure? You’re very pale.” Marie frowned.

What felt like her uterus being wrung out like a wet washcloth doubled her over in pain again. Elysa clenched her jaw and squeezed her eyes tight. “Hospital. You need to get me to the hospital,” Elysa gasped.

Marie picked her up and cradled her like a baby. She wasted no time leaving the cafeteria and heading for the hospital.

Marie carried her across the grounds and laid her on a gurney she came to inside the hospital. She stood there looking helpless while the first nurse came running. Elysa reached for her hand to give it a grateful squeeze. “You can go, Marie. Thank you for bringing me,” Elysa said, sorrowful. She knew what the pains meant but she prayed the doctors and nurses could stop it.

Hours later, Elysa lay on the exam table with her arms wrapped around her middle and her knees drawn up. Tears poured down her cheeks but she didn’t utter a sound. An IV had been inserted in her hand, pumping Atosiban into her body. The medicine’s purpose was to stop Elysa contracting, nine weeks into her pregnancy.

“I need you to roll onto your back for me and open your legs,” The nurse said, firmly. The round woman kept a blank face, not a glimmer of compassion showing in her eyes. None of the nurses ever showed compassion.

“It hurts,” Elysa moaned.
“I know, but I have to check you for dilation.”
The baby monitor beeped steadily in the background while the nurse checked her cervix.

Pain shot through Elysa’s abdomen at the same time as the monitor behind her went crazy. Her quiet tears had become hysterical sobbing when the baby monitor became a constant alarm. Nothing could be done at that point, but to let nature finish its job.

The next morning, Elysa awoke to find herself in a solitary room. Absolute silence except for the sound of her own breaths filled the room. The IV had been removed from her hand and a Band-Aid put in its place. She pushed herself to sitting, holding the side of her head when her vision swam with color. When she stilled, her vision cleared. She looked around the sparsely furnished room. A small nightstand sat beside her bed and a small window for light broke up the pale white walls.

A loud knock and then an elderly woman came in, carrying a tray of food and drink. “I brought your breakfast.”

Neither spoke again as the woman left her food tray on the nightstand and exited the room again. Elysa uncovered the plate to find an omelet, bacon and toast. There was a carton of milk on the tray and a small cup of coffee.

My last meal? The very thought curbed her appetite but she forced the food down.

Hours passed with no interaction of any kind. The seemingly kind woman who brought her breakfast didn’t even return for the tray. Elysa slept for a few hours and when she woke up, the sun was heading on its downward swing.

Elysa knew the score. Upon the completion of their education, the breeders were informed what would happen to them if they didn’t prove useful. She didn’t have much longer to be. She had to escape if she wanted a chance to live. Now she had to come up with a plan.