Heat Rating: Sextreme
Word Count: 52,672
36 Ratings (4.5)
Contemporary Menage a Trois/Quatre
In Bookshelf
In Cart
In Wish List
Available formats
PDF
ePub
Mobi
HTML
Cover Art by Les Byerley
Reviews
A good read but too much violence and not enough romance for me
Jlg29
Love this series and love Dixie for writing it.
rhondavb
Read more... 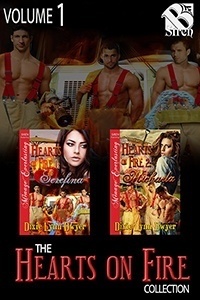 She went to take a step, realizing that maybe, just maybe she shouldn’t have had that fourth margarita. Or was it her fifth?

Someone bumped into her and grabbed her around the waist before she fell.

“Hey sweetheart. Are you okay? You need a little help?” some guy she didn’t recognize asked, and she shook her head. She felt his hand glide along her lower back and to her ass just as someone pulled him away from her. “Take a walk, Cody," Lance "Lucky" Martelli told the guy and then reached for Tasha.

She locked gazes with his hazel eyes just as he reached up and gently pressed a stray hair from her cheek.

“I think it’s time to go home,” he told her. She ran the palms of her hands up his chest and smiled. She knew she was drunk. She used it as an opportunity to touch Lance. She just wanted to pretend for a little while that he cared for her more than just as friends.

He raised one eyebrow at her as he gave her a serious expression.

“I didn’t drive. Catalina drove me.”

“Catalina left over an hour ago. She told you that, and you said you had a ride home.”

“I do have a ride home,” she said and then looked around, feeling as if the room was spinning, and then she focused on Lance. His hold remained firm.

She smiled. “With you, Lance,” she said and then hugged him, pressed her chest against his chest, and absorbed his cologne.

“Okay, sweetheart, let's get a move on it.” Lance held her hand and as they left Eddie gave her an expression that nearly sobered her. He seemed angry, disappointed, and that didn’t sit right with her. That was exactly the opposite of what she wanted. She wanted him and his brothers interested in her. She wanted him to fall in love with her too.

Lance was a complete gentleman as he helped her get into his truck, buckled her in, which gave her palpitations, and smiled that gorgeous GQ smile of his.

“I’ve never seen you overdrink, Tasha. Is everything okay with you? Do you need a friend to talk to?” he asked, and she once again felt a pain to her gut, an instant friends-and-nothing-more death sentence.

She rolled her head to the side to watch him as the warm evening air cascaded through the windows, blowing her hair around but making her feel less drunk.

“I know you’re under a lot of stress with work and with your mom sick, but you’re not alone,” he told her.

Sure I am. I’m alone every night in bed fantasizing about you and your brothers loving me, making love to me—heck, fucking me.

She felt her cheeks grow flush, and her body felt aroused and hot. She adjusted her position in the seat and wished that life would bring her what she wanted.

He pulled the truck into her apartment complex parking lot and turned off the ignition.

“Lets get you upstairs and safely home,” he said. He stepped out, and she absorbed everything about his truck. The dark grey interior, the firefighter sign on the window, a stick of mint gum in the holder, a notepad, and it all smelled like him. Masculine, sexy, mature. Lance was thirty one and a jokester, with shoulder length brown hair she would love to tug on as she kissed him deeply. Then of course there were his jade green eyes. The man was lethal.

Her door opened, and she felt the slight feeling of disappointment that she couldn’t stay in his truck a little longer. This was the closest she had gotten to any of the three brothers in a long time. She instantly thought of Eddie and Tyler. Tyler "Tools" Martelli had been standing by the bar before she left, and he was surrounded by women. But Tyler was compassionate and sincere. She didn’t think the man had ever told a lie. He was the youngest of the brothers, twenty eight, brown hair and gorgeous hazel eyes.

Lance helped her down out of the truck, and she nearly lost her footing. His strong, solid muscles felt amazing pressed up against her body. Their gazes locked, and she felt the sparks, the chemistry between them, but Lance turned away.

By the time they got to her apartment, she was ready to crash. As if reading her body language, Lance lifted her up into his arms as if she were light as a feather, and he carried her to her bedroom. She locked onto the three pairs of thong bikini panties on her bed with matching lace bras. She wasn’t sure which dress she would wear tonight, and had matched it with the undergarments. “Sorry, I wasn’t expecting company,” she told him as he set her down on her feet.

“Glad to hear that,” he whispered, his voice taking on a deeper, sexy tone. She swallowed hard.

“Do you need help undressing?” he asked, and then he looked like he wanted to take his words back. She stared at him.

“I think I can handle it.” She reached back to undo the zipper and nearly lost her balance. Lance grabbed her around the waist and locked gazes with her.

“I’ll help you, then I want you to get into bed and go to sleep.”

“Yes sir,” she replied, and he chuckled.

His eyes sparkled with mischief, and she felt her pussy clench.

I want him so badly. But he seems resistant even now.

Lace reached behind her and softly glided his hand to the top of the zipper. When he started pulling the zipper down, she felt her heart racing, her palms were sweaty ,and she thought she might moan in pleasure.

The second the dress was unzipped, he stepped back.

She let the dress fall, and his eyes widened right before his cheeks turned a nice shade of red.

Make a pass at me. Please let me know that you like me as more than just friends. Please Lance, do it. Say something.

“Get her to the bed,” Eddie said as he pulled off his shirt and began to undress. He lay down on the bed.

“Tasha, are you on the pill?” Eddie thought to ask, and thankfully so; Lance couldn’t even think straight. His cock was hard, his desire to finally make love to Tasha was overwhelming.

Tyler gently lifted her up and placed her on top of Lance. She moaned.

“Are you okay?” Eddie asked, cupping her cheeks as she straddled his hips.

“More than okay. My God, Eddie, you’re gorgeous.” She caressed her hands softly, slowly over his chest muscles.

“You’re the gorgeous one,” he replied, and she shook her head in denial.

Eddie caressed up her thighs to her hips and gave them a squeeze. “Look at me.”

She tilted her head up, and Lance thought she looked beautiful. Her long reddish brown hair cascaded down her back nearly to her ass, her breasts looked so full and large, her belly taut, and her thighs toned and muscular. Despite the bruising, she had an amazing body.

“You’re more beautiful than any woman I have ever met. The bruises will go away. The memories of the past will be forgotten, but our desire, our love to be yours will live on for eternity.”

Tasha smiled softly and then leaned down to kiss Lance despite her bruised lip. She kissed him deeply, and Eddie kissed her back as he ran his hands along her lower back and ass. He pressed a finger down her crack, and Tyler locked gazes with Lance.

She hugged Eddie and then lifted her rear, reached between her thighs, and aligned his cock with her cunt.

“Sweet mother,” Lance whispered as he watched in awe.

Tasha lifted up and lowered onto Eddie’s cock.

Tasha wanted this to be perfect. She waited so long for this moment and some bruises were not going to get in the way. Tyler moved to the side and knelt on the bed, his cock in his hand, stroking, caressing the thick muscle.

“I need you if you can handle it,” he told her, and she smiled. She lifted up and down on Eddie’s cock and gasped as he pumped up faster than she could thrust downward.

“You do this to me, Tasha,” Tyler told her and then leaned forward to kiss her. She clung to his neck and shoulders and poured all her emotions into that kiss. Her lips stung, but she didn’t care. The sensations covering her body were far more powerful.

“Oh God.” She moaned and felt her body shake as cream released from her pussy.

“That’s right, baby. You’re all ours. Come on now, let me get this ass ready for cock,” Lance whispered against her shoulder and neck, then nipped her skin. She shivered, and Eddie thrust upward. She lowered down, opening her mouth to explore Tyler’s cock. She licked the tip, and he gripped her hair, gently caressing it and holding her in place. Her breasts pushed down against Eddie’s chest muscles, and then Lance licked her anus again before pressing a finger up into her. Tasha was on a roller coaster of emotions as she sucked Tyler’s cock, allowed Eddie control of the thrusts from underneath her, and relaxed her muscles so Lance could get her ass ready for his cock. Her face and mouth ached, but the love and desire to make love to her men was more powerful than anything else. The thought of all these emotions, the power of them being inside of her together, had her body tightening up.