His to Cherish (MM)

Love may be within his reach … if he is able to trust in it.

Gabe Thorne was disgusted by his sister’s plan to purchase an empath. She wanted someone who would be compelled to please her, and only her sudden death interrupted the plan. The empath she’d chosen, Ignacio, needs to bond with an anchor almost immediately, and Gabe volunteers to prevent him from being auctioned off to an abuser by his greedy parents.

Ignacio proves to be a sweet, enchanting guy, and soon Gabe begins to develop real feelings for him. Despite this, and the lifelong commitment he made when he let Ignacio bond to him, Gabe doesn’t believe they can have a real relationship. His long habit of pessimism has protected him from a lot of disappointment over the years. This time? Expecting the worst might ruin any chance of a happy relationship.

His to Cherish (MM)

Having Nacio around and frequently reading, Gabe found himself reading more as well. So he was lying in bed, finishing a short story before going to sleep for the night, when Nacio said, “Gabe, I think it’s happening.”

“You’re bonding with me?”

“Hey, you don’t have to fight it.” Gabe set aside his tablet and rolled on his side so he could face his bedmate. He pulled Nacio into his arms. “I’m here for you.”

“This is forever. I’ll always need you.” Nacio’s blue eyes darted around, a sure sign he was nervous.

“I know.” While it was rushed and he’d have liked more time, they didn’t have that option and he truly thought this was the best thing for Nacio. It was nerve-wracking because Gabe didn’t know if it was the best idea for himself.

If they were fortunate, they might just end up in the kind of relationship Gabe wanted, two men in a long-term, loving, monogamous sharing of lives. He was far from certain that would happen, and if the future didn’t work out the way he hoped, Nacio would forever be in his life in some capacity. Gabe knew what he was signing on for and he would honor the commitment, whatever the personal cost. He could do no less for this endearing man who trusted him so completely.

He kissed Nacio’s forehead. “I’ll always be here for you, and I’m not going to take advantage of you. There’s no need to fight, okay? You have so much to deal with, sensing all those emotions. Let me help you.”

Nacio clung to Gabe, face pressed into his shirt. “I’m glad it’s you.”

“Me too.” As much as this was upending his world, Gabe spoke the truth. He did not at all like the idea of Nacio having someone else as his anchor, someone who might not appreciate him or support his individuality as much as Gabe did, and in the short time Nacio had been with him, he’d grown incredibly fond of the young man. “Is there anything I can do to make this easier?”

The answer was spoken into his chest. “Don’t let go.”

Simple enough. It felt so good, so right, to hold Nacio. They had similar builds and heights, with Gabe slightly broader-chested but not as long-limbed, and it was easy to align their bodies for optimal contact.

“I’ve got you, sweetheart.” He rubbed circles on Nacio’s back in what he hoped was a soothing manner. “You don’t have to fight it.”

“Well, sure. We haven’t even known each other a week, and we have no clue what our future is going to look like. Doesn’t mean I’m changing my mind.”

“Good. I really want you for my anchor, Gabe. Not because of your family or money, because those aren’t so very important. I want you because you’re kind and thoughtful, and you make me smile a lot. Also, the fact that you’re such a good person despite your family speaks very highly to your character.”

It was an incredible privilege to be Nacio’s anchor, and while Gabe wasn’t convinced he was worthy of the honor, he’d do his very best. “I feel the same way about you with your parents. They’re so terrible and yet you’re a great guy.”

Nacio smiled. “I’m glad you think so. I really am very lucky to get you for my anchor.”

Gabe wasn’t sure about that, but hearing it felt damn good all the same. “I’m not big on making promises,” he said, “because if I make one, I keep it. I’ll promise you this, though—I will never, ever deliberately take advantage of being your anchor, and if I don’t realize I’m doing it, tell me and I will stop.”

“I believe you,” said Nacio quietly. “With you, bonding isn’t frightening the way I’d thought.”

For something as mad as agreeing to be Nacio’s anchor, it felt remarkably right to hold him. Gabe was content to lie in silence and let Nacio deal with the empathy. He didn’t think he’d be much help in that department.

“You know, everyone uses the term anchor, but now that it’s happening to me I think an old-fashioned compass might be a better analogy,” said Nacio. “I’m pulled to you like a magnet, and you’ll help keep me oriented in a sea of emotions.”

The description made sense to Gabe, who wasn’t very well versed in empathy. He resolved to work on increasing his knowledge. “So you can feel the bond forming?”

Nacio’s next move could only be described as nuzzling followed by a murmur of contentment. Gabe wasn’t sure any physical contact had ever hit him the way this did. All the protective and nurturing instincts he usually tried to ignore rushed to the surface, along with great affection.

Wishing he could hide his feelings if only to protect his heart, Gabe resigned himself to the fact that he was falling hard and fast. It would probably come back to bite him in the ass later, but with Nacio looking at him with such wonder, in the moment he was having a hard time finding the regret he knew was lurking just around the corner.

“Would you mind very much to kiss me? I want to know what it feels like.”

As if he could refuse Nacio anything. Since this was presumably the younger man’s first kiss, Gabe kept it light, a gentle press of his lips on Nacio’s, followed by another which lingered a little longer. The third kiss Nacio shyly returned. 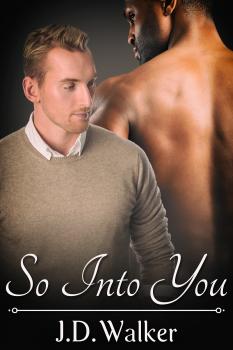