How to Get Your Man in Five Easy Steps (MF)

How to Get Your Man in Five Easy Steps (MF)

She was fortunate, really, she supposed. She had been given a wonderful opportunity working in the North Pole for twelve months on a research drifting station with the eminent Professor Peregrine Falcon. She was well aware of just how lucky she was. Of course she was. Lucky that he’d put a word in for her when there were far more qualified candidates who could do the job as jill-of-all-trades just as well as her—if not better. Students who would sell their very souls for such an opportunity. Whereas she, on the other hand, was so under qualified she wouldn’t even have got an interview without Falcon’s intervention. However, her fascination with his work in oceanology had made her beg him for just such an opportunity. Happily, being the friend he was, Falcon had pulled an enormous amount of strings to get her assigned to this most prestigious of posts. Being with him and working with him was not an easy task. It took all the strength she had not to throw herself into his arms and beg him to love her. But, she consoled herself, at least she had found love, even if it was the unrequited kind.

Unrequited love was not a gentle thing that whispered around you like the dawning of a new day, or like a soft dew of a spring mist rolling across the English countryside. It was a brutal, insidious undermining of your self-confidence. It tore through your emotions like scissors through marshmallows, thrust you into the darkest of melancholies, and ripped into you with the savagery of a carving knife. She sighed, filled with sudden dejection. Sometimes life just wasn’t fair.

Determinedly dragging herself out of the doldrums, she consoled herself with the sure and certain knowledge that it was not her who was lacking, not the real her. Not the her with the gentlest of natures, nor the her that was always willing to please, to drop everything and help out when no one else would. No, it was the her that was ordinary.

Staring into the tiny mirror on the window ledge, she took stock. Slightly overweight. She grimaced. Too much comfort-eating of chocolate bars. Average height, five foot four in her stocking feet, she was inches shorter than Falcon. Run-of-the-mill brown hair, not straight and sleek, the colour of chestnut, or mink, or even tawny, no, just brown. And her eyes. She peered deeper into the mirror. Again just brown, not unusual in any way with little flecks of hazel or green, just regular mud brown like a dirty puddle. And sadly, she also wore glasses, thick-rimmed ugly specs that invariably slid down to perch at the end of her nose. She’d tried contact lenses, still had them, in fact, secreted away in her case. However, sticking the flimsy circles in her eyes had been ghoulishly unthinkable.

Sighing again, feeling thoroughly fed up, she continued with her annihilating self-analysis. And her name! Well that was ordinary as well. Daisy Brown! She scowled. Brown again! It seemed to her that she was always going to be the epitome of brown. Give her a red sweater, and with her ample curves, she looked down in dejection at her bountiful breasts, well she’d look just like that fluffiest of feathered friends—a robin.

Falcon, on the other hand, was every girl’s dream, gorgeous and far from ordinary. For a start, how many men were named something as unusual as Peregrine Falcon? And then there was his height, six foot in his socks, with thighs that were thick and powerful. Dark hair, so black it was like a raven’s wing, and so sleek she had to resist the urge to run her fingers through the luscious strands. Then there were his eyes, and there was only one word to describe them and that was—gorgeous! Grey like the winter’s ocean, cool and steely, a grey that changed colour according to his moods. His jaw was strong, nay chiselled, and sported the new man look, that of a designer stubble. All those attributes along with the sexiest smile known to man made him totally and completely irresistible to women. But his hands! She fanned herself with the tea towel. Closing her eyes, she was convinced she could actually feel his hands on her naked flesh. Trembling as her imagination grew out of control, and became so real she felt the heat of lust goose-bumping her skin, she was brought rapidly and unexpectedly back to the present by the arrival of her arch enemy, Brie.

The other woman shot her a puzzled look and threw herself elegantly into a seat at the kitchen table, demanding coffee. Dr Brie De-Latrice was intelligent, painstakingly so. A meteorologist with credits to her name, she was considered top of her field, and she was beautiful, no ordinary looks for her. Brie was petite in every way, from her perfect heart-shaped face down to her pretty toes, the nails painted a pearly pink. Her eyes, thickly lashed and extraordinary, were blue, the deep blue of a perfect sapphire. And she was blonde, so blonde her long, silky hair was almost white. Shining like a halo around her head, she could have been the proverbial guardian angel of an active imagination, and Daisy desperately wanted to rip every shiny strand out of her head.

Falcon’s hands caressed her breasts through the thick material of her onesie, cupping their fullness and flicking her already burgeoning nipples. Desperate to feel more of him, and more of the sensations he was evoking, she pressed closer, groaning deep in the back of her throat.

Lifting Daisy into his arms, Falcon strode to the bed and dropped her gently on the covers. Seconds later he was lying beside her, his hands busily opening the buttons that did up the front of her nightwear. Each brush of his fingers on her flesh scorched like fire, hot yet somehow weirdly chilly, sending goose bumps across the surface of her sensitised skin. Her head fell back as his mouth followed where his fingers had touched and she could feel the soft caress of his breath as he worked his way down her body. A bit more manoeuvring and the onesie was lying on the floor and she was naked in his arms.

Shame momentarily burned in her cheeks. She was no slender, nubile nymph knowledgeable in the ways of men and sex. She was a slightly, nay a fully curved innocent who’d never really been kissed until Falcon had taken her in his arms. And as to being naked in a man’s bed—unthinkable.

However, her embarrassment was soon replaced by panic as Falcon went to pull away.

“No!” Clutching wildly at his shoulders, Daisy stared wide-eyed into his face. “No, don’t go, Falcon, I want this, need this, please don’t make me beg.”

Falcon stared down into Daisy’s tear filled eyes and, groaning deep in his throat, he hesitated no longer and lowered his mouth to find her seeking lips.

Soon Falcon was as naked as she, and with an insatiable need to see him unclothed, Daisy, using instinct alone, pushed him back against the pillows. Bending her head she caressed him with her eyes and her lips. Pressing open-mouthed kissed to his face, his neck and his muscular shoulders, her mouth glided across his manly chest and sought out his hard nipples, suckling and nipping until she had him groaning in need. The smell of him rocked her senses. He smelt so good, so masculine, a heady mixture of musk, soap and sweat, and she inhaled deeply. Moving lower, she paused at his taut, flat stomach to sink her tongue into his navel before travelling lower still to the soft curling of hair that arrowed down toward his manhood. It was at this spot her breath caught in her throat. He was massive! His cock was so engorged like a fully ripe marrow, seeming to explode out of his pubic hair like a rocket out of a silo. Fascinated, she stared intensely as it jerked when she touched it and cum dewed on its tip. Closing her eyes, she stuck out her tongue and tasted the cum. Falcon groaned and his hand at the back of her head gently pushed her further down to his cock.

“Suck it.” He groaned his voice hoarse with need.

Suck it! Daisy nearly had an apoplexy. Never in her life did she ever imagine she would do such a thing. Taking a deep breath, she wrapped her hands around his dick and took him into her hot, moist mouth. Hesitantly at first, she began to suck, her hands moving backward and forward in a gentle rhythmic motion. Then she got bolder. Gagging slightly as she eased his length further down her throat, she felt euphoric as the words, “Oh God” burst from him. Her tongue twirling around his length and his slight thrusting caused his cock to swell all the more, until suddenly he gave a tormented, primal groan and spilled his hot seed into her mouth. Swallowing hard, she eased his penis out. It was already beginning to grow flaccid. Licking the moisture from its length, she then gently swiped her fingers across her lips, removing the last remaining semen. Feeling slightly dazed, her eyes heavy with passion, she fell in an exhausted heap across him, her cheek resting on his pelvis, his pubic hair gently tickling her face.

Falcon caught hold of Daisy’s arms and pulled her up to his chest. Pressing her head upon his breast, he growled a hoarse, “thank you.” Smiling as she heard the heavy thump, thump of his heart, she felt euphoric. It was obvious from the sound of that organ and the look of now flaccid lower one that he’d enjoyed what she’d done to him. However, although he was obviously satisfied, she still felt an unbearable ache deep inside her that only his particular attention could assuage. Squirming slightly in an effort to relieve the ache, she straddled one of his thick, muscular, hair-covered legs. An irresistible urge overcame her and she started to move, rubbing her damp pussy up and down his thigh. 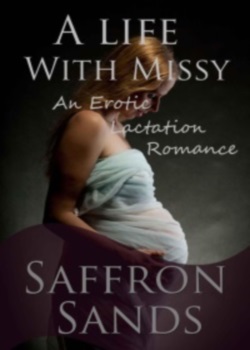 A Life With Missy
Saffron Sands
In Shelf
$2.99