Please note this is book 2 in the Pentacles of Magick series. Book 1 is Untamed Magick.

Cash Scott has drifted for years, abusing his magick and playing the bad boy. Now as his time as a free witch is coming to an end, he plans a last ditch effort to save his brothers. What he finds instead is himself on a collision course with Selene, a hot little firestarter with a death wish, unable to control her power or escape her past.

Selene's accidental contact with a dark force she can't define, throws her into a situation unlike any she has seen before. But the last thing she needs right now is an all-consuming attraction to a man she can't trust. Determined to make her escape any way that she can, she find herself in lust and on the run with another man who doesn't seem surprised by her ability.

Together they must fight against a centuries old curse, a vicious hit man and a bounty hunter witch determined to capture them all. Will a little magic be enough to bind their fiery love or be just enough to destroy them?

"The steam from Pentacles of Magick: Untamed Magick will warm your heart and definitely leave you wanting more..." Tina - Two Lips Reviews

“Hey, Selene. What’s wrong?” His urgent question startled her from her thoughts as she realized she hadn’t been paying attention to her emotions. Her arms had grown brighter and she was getting pretty hot. “Whatever you’re doing stop it. You’re burning me.”

Not wanting to wait any longer, she pulled the bike off the road onto the dirt and grass just behind a tree. A good a spot as any to rest, right next to the highway but out of sight of passersby.

Before she came to a stop Cash bounced off the bike, ripping off his helmet. “Damn, woman, what the hell are you doing?” He ripped open his shirt to reveal reddened skin on his lower abdomen. Right where he’d been pressed up against her on the bike.

“You didn’t feel the heat burning the hell out of me? Are you kidding? Look at me.”

She looked at him all right. Smooth, muscular chest with just a fine sprinkling of dark hair that narrowed into a trail that disappeared below the waistband of his pants. She licked her lips at the thought of the flesh hidden there. Most of the ride she had felt the hard imprint of his cock pressing between the cheeks of her ass, driving her mad. It had taken every ounce of willpower not to wiggle back against him.

Her mouth went dry as he moved toward her almost in a surreal slow motion. The air between them alternately heated and cooled. Heat from her and a cool breeze from him? How was that possible?

Despite the cool air her flesh heated further, her body tight in her own skin. She needed to run away as much as she craved his touch. She shouldn’t be thinking about him this way.

What the hell is wrong with me?

He’d seen her loss of control earlier and he seemed rather nonchalant about it. Like he knew what to expect. Who was—no, what was he? There was something different about him from the other men who’d come after her. Selene found it impossible to hold onto those thoughts with his tall, half-naked self moving closer and closer. Her hardened nipples brushed against her clothes, rubbing the sensitive skin. Her body throbbed and ached for his touch. In the light of her warmth his amber eyes glowed with a lust to match her own, her last thought before he crushed her to him, taking her mouth with a powerfully demanding kiss. Lips, teeth, and tongue all worked in frantic movements, searching for more.

His hand wrapped around the back of her neck to cup her head, crushing her lips harder against his own. Her own hands did some roaming of their own. Specifically all over his warm, bare chest, savoring the tight muscles flexing as he moved against her. She couldn’t help herself, she didn’t want it to stop. Parting her mouth slightly, she allowed him the entrance he sought, his tongue smoothing over her lips. When his tongue touched the tip of hers, his taste and essence exploded within her. Not just her mouth, but her whole body. His flavor, a unique wild musk, tasted of wild nights, a cool night breeze, and heat. Oh hell, lots and lots of heat.

Desperate for more, and willing to get it any way that she could, she jumped up into his arms, wrapping her legs around his waist. His free hand caught her ass, pulling her tighter against him. Flesh—she wanted more flesh. She pushed at his shirt and jacket, baring his lean shoulders to her touch. Pressing her lips against his shoulder, she rained a trail of kisses up his neck, alternating with gentle bites. Damn, she wanted to sink her teeth in him as he buried his thick, hard cock in her wanting pussy.

She wrenched her mouth away from his. “What the hell are we doing?” Her breath came in short, shallow pants.

“Don’t ruin the moment by trying to analyze it, Selene.” He gripped her bottom lip gently between his teeth, nibbling and stroking with his tongue. Releasing his hand on her ass, he stroked up her torso, close to her leather encased breasts. “You have on entirely too much clothes, you know that.”

She laughed. “I couldn’t agree more." 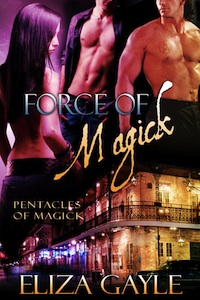