Get fourteen stories of scorching man love in one volume with C.J. Sneere’s Man Love Omnibus. This omnibus includes all of C.J.’s single titles, plus The Story of Jack & James, the tale of a punk rocker and a young man lost who found himself through love. You also get the complete Waking Up Werewolf series, which is filled with monster man love ménages.

Jacob is on the prowl for a pick up. Don't mistake him for a player, though. He's careful when he scopes out prime man meat. He brings home a quiet French Canadian named Andre, who's a cross between demure school boy and bad boy biker. However, a surprise greets Jacob Monday morning, when he finds Andre is now an employee of the gym he also works at, and his hook up seems less than happy to see him. Sparks fly and things get hot and sweaty in the locker room.

Tom has lived most of his life trapped in a lie. Raised in a strict Christian family, he toed the line according to his father and mother's wishes. But now he's undeniably attracted to his sexy bosses, who also happen to be life partners. When they offer him a weekend island excursion, he finds they're just as attracted to him, and things heat up between the trio at sea as well as on land.

Bruce is a technophile. Simon is a Neo-Luddite. They work at the Daily Brew together, where they constantly butt heads. But after Simon catches Bruce getting oral pleasure in the break room, their bickering turns into anger-fueled ecstasy.

The Story of Jack & James (The Complete Jack The Lad Series - M/M with M/M/M/M scenes):

The complete Jack The Lad series includes five stories plus a bonus tale. The story of a punk rocker and a young man lost who found himself through love. This book concludes with the wedding of Jack and James. The day of their nuptials includes a quickie before the ceremony and a showdown with a drunken, dejected father. Please join the partners later in their honeymoon suite for chocolate eaten off of heated skin and tasty body paint.

Warren Lindstrom has it all--a lovely girlfriend, a great job, a loyal dog--but it all comes crashing down around him after a werewolf attack lands him with lycanthropy and he's introduced to an underground world full of monsters. Now Warren must help a sexy vampire clear his ex-lover, a brawny troll, of a murder rap, plus bring down an organization called Purity, who want to wipe monsters off the face of the earth.

An urban fantasy erotica series from C.J. Sneere. Welcome to the underground, where monsters rule and sex becomes an adventure. 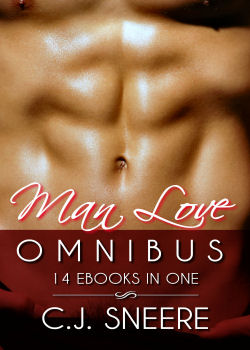