Men at Work by Elizabeth Cage

Matt’s a workaholic. It’s driving Emma crazy, but she’s sure that their new loft room will mean they see more of each other. She has two young builders working overtime to get the work done. The night they finish, Emma is ready to celebrate with high heels and a fuck-me dress – but Matt cancels at the last minute. Feeling reckless, Emma asks the builders to stay and share dinner. If she’s feeling generous, they may even share more.

Professor West’s classes have always provided the most stimulating thoughts. Miss Rifkin has spent plenty of time fantasizing about her shaven-headed tutor. At last she makes an appointment to discuss her grades – surely there’s a way she can win extra credit? Perhaps a project on interpersonal relationships, with plenty of research on romantic attraction? They thrash out the details over the desk in the professor’s office.

Heidi loves her life. Single, solvent and happy with solitude, on a Friday night there’s nothing she loves more than a walk on the beach. In the warm evening sea breeze there’s plenty of scope for people watching – and some of those people are enjoying each other al fresco. Inspired, Heidi notices a fellow voyeur among the driftwood. All it takes is for her to undo her sarong and move towards him, wearing nothing but a flimsy bikini.

The Eye by Primula Bond

It’s hard to be alone in London. Even when she gets up at the crack of dawn to take photos of the view from the Eye, there turns out to be another passenger in the pod with her. Lucky he’s handsome. In the dense fog, there’s nothing to see apart from each other, and she’s not used to being this close. Maybe because he’s a stranger she feels close enough to dare to expose herself.

Life of a Salesman by Landon Dixon

He’s always admired Jennifer’s bountiful tits. On the last night of the sales convention, he decides to take charge. Insisting that Jennifer joins him for dinner, together they raid the mini bar in his hotel room. He can’t take his eyes off Jennifer’s enormous chest, and when at last she takes off her T-shirt he’s more than ready for a night of breast-obsessed lust. 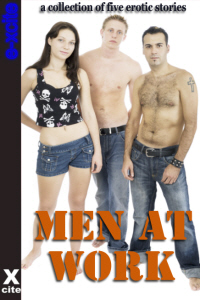 ‘Would you like to stay for supper?’ she heard herself say. ‘I mean, it seems a shame to waste all this food. Anyway, I hate eating alone.’
Gus opened the wine and they polished off the chicken in double quick time before starting on the dessert.
‘This is delicious,’ commented Gus.
‘Terrific,’ agreed Steve.
‘You’re right,’ said Emma, spooning the creamy substance between her lips and licking the spoon provocatively.
‘Here, you’ve missed a bit.’ Steve leant across and wiped cream from the corners of her mouth, his fingers lingering. Gus watched with interest.
‘Actually, I hadn’t realised just how hungry I am.’ And with that, she took hold of his finger and began to nibble.
‘You’re tipsy,’ laughed Gus.
‘Not tipsy enough,’ she replied, pouring more wine.
‘Hey, steady on,’ said Steve.
‘Bloody men,’ she complained. ‘All the same.’
‘No we’re not,’ protested Gus.
‘Show me, then.’
Gus leaned across the table and gently kissed her on the mouth. Responding instantly, Emma pulled him towards her and their tongues entwined. Simultaneously she felt Steve’s hands around her waist. He had got up from the table and was standing behind her, kissing her neck. She groaned and his hands slipped between her legs, feeling her wetness. Her head was spinning.
‘Let’s go upstairs,’ she gasped. ‘I want to christen the loft room.’
On the newly polished wooden floor, Emma lay spread-eagled, her dress indecently hitched up around her waist with Steve between her legs, tonguing and licking her, while Gus peeled off her stockings. She came quickly, her eyes swimming, while she was sucking Gus’s delicious cock, and while she was still recovering, he thrust his throbbing hardness into her. She heard a woman’s voice scream – ‘Screw me to the floor, you fuckster!’ and realised it was her own. She was amazed at Gus’s stamina and he kept going until she came again, which wasn’t difficult when Steve was pinching and sucking her breasts while simultaneously caressing her clitoris. While Gus was getting his breath back, Steve slid into her welcoming pussy and she came again in waves, melting into what she imagined she could describe as a state of fuckstasy. They did it on the floor, against the wall, on the rug, twice on Matt’s new desk, and on the leather chair. Emma hadn’t realised it was possible for one woman to enjoy so much pleasure and attention. Finally, exhausted, they slept.
They awoke in the early hours, limbs entwined. Emma stretched languorously and went down to the kitchen, naked except for her high heels, and made them coffee. Soon after, Gus and Steve packed their tools away and kissed her goodbye and she thanked them for all they had done.
When they had left, Emma gradually returned to earth with a thud. She couldn’t quite believe what had happened, that she had behaved so wantonly. She told herself it wasn’t her fault, that it was a combination of frustration, neglect, a need for attention – perhaps even revenge on Matt for making her feel invisible. 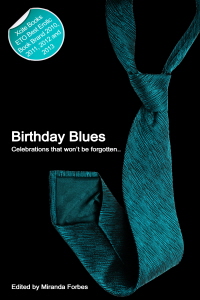 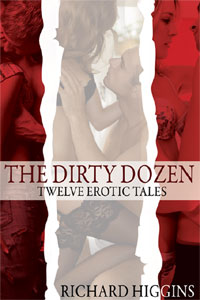 All the Way
Giselle Renarde
In Shelf
$4.99