Violet and Her Alien Matchmaker

Single mom and unemployed, Violet has done everything she can to provide for her son, but the time has come to admit she can’t do it all. Not alone. Dating humans hasn’t worked so well for her, so she finds herself at the Interstellar Love Agency, in the hope of finding an alien spouse. Just one problem… they don’t accept single mothers. When Liptu alien Tiraz overhears the agency’s refusal to pair her, he decides to play matchmaker. Only, he didn’t count on falling for her himself.

Lydia and Her Alien Boss

Pregnant and alone, Lydia works hard to provide a home for her unborn child. With the worst luck in love, she decides to try the Interstellar Love Agency. Maybe she just needs a little out of this world lovin’ instead of the human variety. It never occurred to her that her perfect match was under her nose all along – and signing her paychecks. Dating her alien boss seems like a recipe for disaster, but Gryf is determined to win her over – one kiss at a time.

*Both stories were previously published as separate titles but have never been available at Bookstrand. The content remains the same. 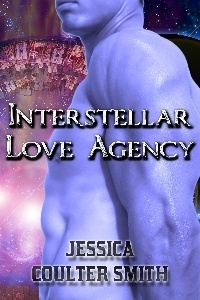 A small hand tugged on her shirt. “I’m hungry.”

Of course he was. At five, her son had just hit another growth spurt and was trying to eat her out of house and home. If this plan didn’t work, she was scared to think of what would happen to their small family of two.

“Simon, I’ll take you home and make you a peanut butter sandwich when we’re finished here, but remember what Mommy said?”

He sighed. “Be still and be quiet.”

Her heart thumped wildly against her breast as her clammy hand pushed open the glass door. The lobby was swanky with leather furniture, a flat screen TV, and a reception desk that looked like it was made from marble. The woman behind the desk was dressed in a no nonsense suit, her hair back in a severe twist, and her expression pinched at best.

“Do you have an appointment?” the woman asked in a clipped tone.

Where had they found the Ice Queen?

“I spoke with Mr. Anderson this morning and he told me to stop by any time.” Violet licked her lips. “If now isn’t a good time, I can always come back later.”

The woman’s eyebrows arched as she stared down her nose at them, but she picked up a phone and pressed a button.

“Mr. Anderson, there’s a woman here to see you.”

“My name is Violet Wilcox,” she said.

“A Violet Wilcox. She said she spoke with you this morning.” The woman paused. “Of course, sir. I’ll send her right up.”

She hung up the phone and fastened her frosty gaze on them again. “Take the elevators across the lobby and go up to the fifth floor. When the doors open, you’ll turn right and it’s the last office on your left.”

Violet tugged Simon toward the elevators and they made their way to Mr. Anderson’s office. It was easy to find, but once they stood outside the closed door, Violet felt her stomach tighten and her hand tremble. She raised her hand and knocked briefly before pushing the door open. The balding man behind the desk pushed his glasses up his nose and motioned for her to come in.

“Please take a seat Miss Wilcox.” His eyes widened when he saw Simon. “And who might this be?”

“Oh my, oh my. You didn’t mention anything about children when we spoke before. This is…oh dear.”

His face flushed and he looked flustered. Violet wasn’t sure what the problem was. So she had a child. What was the big deal? Were the aliens such assholes that they didn’t like children?

“Well, we pride ourselves on presenting young women who are seeking a husband, no matter his race, and those women have always been single and never married before. I’m not sure how they’ll handle someone who’s divorced. Most of them believe that a mating is forever. If they discover you’ve been married, and left your spouse, they may not want to risk a relationship with you.”

Nice of him to assume she did the leaving. He must be one of those assholes that always blamed the woman for everything that went wrong.

“Not…Not…I don’t… how can you not be divorced when you have a child? The boy obviously has a father.”

Her cheeks burned with embarrassment. After five years, you’d think she wouldn’t be shamed by her lapse in judgment. Not that she was ashamed of her son! Far from it. What embarrassed her were the events that led up to the birth of her son.

“I was never married, Mr. Anderson. Simon is five and I’m twenty-two. I got pregnant the beginning of my senior year of high school and my boyfriend at the time turned out to be a real jerk and dropped us as fast as he could.”

Perhaps coming here hadn’t been such a grand idea, but the aliens were so desperate to find a match that they were offering to pay all expenses for the woman to travel to their world and stay for as long as it took. She should have known it was too good to be true. Not that she needed a man to take care of her! She’d been doing just fine on her own. Mostly fine. Well, partially fine.

“I’ve always wanted to try this,” she murmured, right before she licked him. Her tongue dragged the length of his cock before she fitted her lips around the tip. His taste exploded on her tongue, drawing a moan from her. She’d read that sometimes men didn’t taste good when they came, but the pre-cum that coated her tongue tasted sweet. Maybe that was unique to her sexy alien.

She savored him as she teased and tormented him with her lips and tongue. Tiraz clenched his hands at his sides and was still as a statue. Violet sucked a little harder and he groaned before reaching for her. She’d thought he’d grab her hair, but instead he slid his hands under her arms and hauled her to her feet.

“If you keep that up, this will all be over before we’ve even begun,” he said with a sexy growl.

“You were perfect. Now it’s my turn to pleasure you.”

“I’ve never…” She blushed. “The few encounters I had before were more high school flings in the back of a car. Simon’s father was always more interested in his own pleasure than mine.”

His hands skimmed her sides. “Are you telling me you’ve never come before?”

She felt her cheeks burn brighter as she shook her head. “When Simon was a baby, I tried to pleasure myself a few times, but I wasn’t any good at it. And then when he got older, it was too risky that he would walk in and find me.”

Tiraz kissed her jaw then kissed his way down her neck. “Well, we’ll have to correct that tonight. Simon isn’t here and we have all the time in the world.”

Her hands trembled as she placed them on his chest. “Do you…do you think we could maybe not drag things out so long this first time? I’m kind of nervous and I think if we just got the first time out of the way, I’d feel better.”

Tiraz traced her nose with his before settling his mouth over hers. His tongue traced her lips and she opened to him. It was their first true kiss and it made her knees weak and her heart race. His hands lightly caressed her and slowly unfastened her bra, letting it fall to the floor.

The cool air made her nipples pucker and she shivered. With infinite tenderness, he cupped her breasts, his thumbs stroking the hardened peaks. No one had ever touched her with such care before and it almost made her cry. Tiraz made love to her body, touching, stroking, and kissing every inch that was exposed to him. When he slid her panties down her thighs, she sucked in a breath to steady her nerves.

Tiraz stroked her damp curls. “I want to taste you, Violet, but I won’t if you don’t want me to.”

“All you have to do is tell me to stop, or say no, and I’ll back off. If you decide you aren’t ready to go any further tonight, I’ll respect your wishes. You’re in complete control of everything we do, even if it might not seem like it.”

She sat down on the edge of the bed and then laid back. She didn’t know what to do with her hands so she placed them by her head. Tiraz knelt beside the bed, his hands gently spreading her thighs. Violet had never felt so exposed in her life and her cheeks burned with embarrassment. His hands slid up her thighs and his touch was light as he brushed the curls at the juncture of her thighs. Violet felt tense as she waited to see what would happen. She hadn’t lied when she’d said Simon’s father had barely touched her. He would jerk up her skirt and shove himself inside of her; there hadn’t been sweet caresses and tender kisses.

The first lap of Tiraz’s tongue was something of a shock to her, but as his lips and tongue explored her tender flesh, she slowly began to relax and enjoy it. His tongue circled and stroked her clit until she felt like her body was on fire. Her legs trembled as she strained for a release she’d never felt before. Violet fisted the bedding as her hips shifted. She couldn’t sit still when every instinct was telling her to move.

Ruin Her (MF)
Sam Crescent
In Shelf
$3.99
Tweets by
sirenbookstrand