Night of the Dragon (MFM)

Ryden and Rayne are Berserkers, immortal warriors wrought of Odin’s lightning. They are cursed to walk the Earth for one thousand years without finding love. And then they smell her...

But can anything develop between the Berserkers and their mate with a hunter sworn to keep them apart?

Night of the Dragon (MFM)

Beauty and Her Beasts (MFM)
Alexandra O’Hurley
In Shelf
$3.49

Magic, Mischief, and Mayhem (MFM)
Alexandra O’Hurley
In Shelf
$3.49
All Books In Cart
All Books In Bookshelf
Excerpt

Angelica grabbed Karli by the arm, stopping her in her tracks. “Whoo, Karli! Take a look at those guys over there! They are staring right over here. I saw them earlier by the Snarling Wolf, and talk about hotness.”

“Sshh! Be careful what you say within earshot of our guests!” Karli looked around to see if any guests had heard Angelica’s comment, and once she was sure they had been ignored, she smiled sneakily and asked Angelica, “Where?” She smiled at their shared conspiracy and looked around for the men Angelica was talking about, and her eyes locked with the most stunning set of silver eyes she had ever seen.

Heated need swirled within her, and her skin felt a size too small, as if he were invading her with his stare. Unable to look away, the longer she watched, the more frenzied her insides became, as if he had some kind of power to entrance her. She fought the gaze to no avail.

A slight hitch in his mouth seemed to reveal his enjoyment of her perusal.

Casting her eyes south, she noted wide shoulders, and a muscular chest leading down to narrow hips. Tall, blonde, and mysterious, her type exactly, and from what she could see from her vantage point, he was utter male perfection. Leaning his back against a brick wall, he openly watched her as he rubbed one hand along his chest and abdomen.

She itched for his hand to be her own instead, and felt heat in her own fingers.

Someone spoke to him, breaking the spell he had on her. As Karli’s glance pulled to the meddler, another man who could have been his twin whispered into his ear. The twin then turned to smile at her and lock his gaze with her as well. Karli felt the same pulling sensation, as if the man beckoned her with his eyes alone, slipping into her mind and taking over. Karli pinched herself, trying to hold on to reality and fight the insane impulse.

As the second released his hold on her eyes to look down her body, she noted the two men were not alone. There were three men to their right, but they were different, all darker haired with bright amber eyes, but they were all incredibly tall and fit, their bodies almost identical. All five were stunning male perfection, and she tingled all over from their combined gazes. 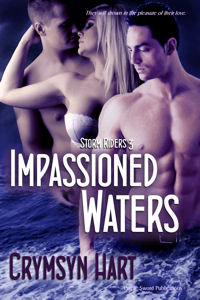