Arjan was well aware of his perfect face and body but he'd turned his back on modeling to pursue his dreams of becoming a pharmaceutical chemist. Arjan never expected a stranger in a bar to buy him a bottle of water, nor to be courted by one of the richest men in the world the very next day.

It could have all been fun and romantic, but for a stalker who refused to accept that Arjan was not a possession.

Being in a relationship with a billionaire can be nice but restrictive, especially when there are bodyguards around.

Will Arjan learn to live with the choices he makes so he can be with Paul, or will the stalker put a violent end to what is beginning to look like a romance made in heaven?

One look across the dark room and Paul knew his days as a single man were numbered.

Paul leaned against the wall next to the bar, observing, barely listening to what his best friend, Julian Davis, was talking about. It was Julian’s last night in town before leaving for their Madrid headquarters. Apparently, two weeks away from Seattle was reason enough for Julian to have one last night of fun.

Paul had not wanted to go out tonight, too exhausted from the day’s work at the office, but he could never refuse Julian. Especially when the man made puppy dog eyes at him. So here he was, still in his work suit, in a bar, staring at a stranger like a teen with a crush.

Paul had seen the man sitting alone in the corner the moment he’d stepped inside the bar. The man sat hunkered over his laptop, a frown of concentration on his stunning face. Even seated he looked tall and lean, with the body of a fitness model—the type seen only in magazines. The man’s dark, wavy hair brushed at his nape, his solid biceps bulged under the sleeves of his sweater but with none of the hulk associated with bodybuilders. A stack of folders and an untouched bottle of water sat beside him on the table. Engrossed in his work, he was oblivious to the looks men and women cast his way. Paul’s body reacted to the way the man’s nose wrinkled now and then when something on the monitor didn’t agree with him. The sight practically made him drool. He loved looking at such a fine-looking male face framed by sexy, rimless glasses.

“Hey, Paul, whatchoolookin’ at?” Julian’s slurred words right next to his ear made Paul jump. He glanced to his side and saw that Julian had joined him by the wall. Julian was stretching his neck trying to see who Paul was checking out. At thirty-six, he was a year older. They’d met at college when Paul was just a sophomore and Julian was a junior. Although Julian had known Paul was gay, it hadn’t stopped him from becoming friends with him. Now Julian was his company’s vice-president for marketing and finance.

“No idea,” Paul said, raising his hand to take a swig from his bottle of beer.

“I mean I have no idea who I’m looking at,” Paul said, not taking his eyes off his mark. He grinned when the man took a drink from his bottled water only to grimace. It had either turned flat or gone warm. Either way, it would be nasty.

Paul turned to the bartender who’d been wiping down the counter near him and asked him to send the man whatever water he was having. He frequented this bar, and knew that in addition to their extensive alcoholic beverage lists, they also had a wide selection of designer water on their menu. Many laughed when they saw it for the first time, but judging by the number of people holding the different brands in their hands, they had hit a market previously ignored. The bartender nodded and turned away to serve his order. He watched his target’s look of surprise when the cold bottle was brought to him, and he must have asked something because the server turned and pointed toward Paul. The man then glanced where Paul stood with Julian.

Curious eyes clashed with Paul’s hungry ones. In that instant, there was a sizzle in the air... a welcome connection between them. Paul caught his breath. Now that he could fully see his face, the man looked simply... breathtaking. His eyes seemed to twinkle with interest as he raised the bottle to his lips. Paul watched, mesmerized, as the square jaw moved, bringing the stranger’s high cheekbones and chiseled profile into sharp focus while shadows played across his smooth, pale skin. Under the lights the slightly wavy black hair turned blue. Paul had never seen a man this magnificent.

Thank you, the man mouthed, tipping his bottle toward Paul. Paul raised his in a silent toast.

Without bothering to take his leave of Julian, Paul walked over to the man and noticed the exact moment when his eyes widened in anticipation. Paul grinned in satisfaction when he saw his target absently reach out to close his laptop while maintaining eye contact with him, and slide the laptop and stack of papers off to one side as if to make room. As Paul neared, the man took off his glasses and set them on top of the laptop.

“Paul Howell,” Paul said in greeting, reaching out with his right hand. He watched for signs of recognition to his name. At this stage, eyes would light up, calculating.

Cool fingers clasped Paul’s hand for a brief moment before letting it go. “Arjan Kerchner. Thanks for the water.”

Paul nodded as he continued his study of the man sitting in front of him, while still watching out for some form of recognition. There seemed to be none, but his lip curled in amusement when Arjan’s gaze extended over his mouth down the full length of his body and back up to his eyes. It was brazen and highly sensual. Paul’s body heated in response, even while his mind cautioned him not to get too excited.

Breaking eye contact, Paul tilted his head to the stack of papers. “Work?”

“Want me to leave so you can continue working?”

“No, please stay. I don’t think I can stand reading another stupid answer from my students. One would think, as chemistry majors, they would have something concrete to say when writing up a report from their experiment results.”

“Yes, associate. Chemistry. Please, join me. Sit down,” Arjan said with a low laugh before taking another sip of his water. 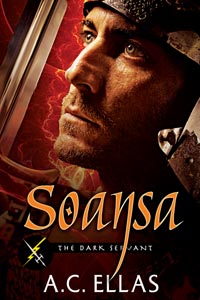 Not So Average Joe (MM)
Stormy Glenn
In Shelf
$5.50
Tweets by
sirenbookstrand