Songwriter Andrew uses drugs to quiet his uncertainties about his ongoing relationship with his twin brother, Ben. Ben, on the other hand, feels no guilt or shame and only wants to be able to love Andrew openly, without all of the pretense. Time and again, Andrew gives in to his desires for Ben, only to lose himself in the alcohol and drugs once more. No matter how hard Ben tries to convince him, Andrew can't seem to reconcile his mind and his heart. Finally, disheartened by Andrew's repeated empty promises, Ben begins to pull away, forcing Andrew to choose between letting go and finally finding the strength to stop running. 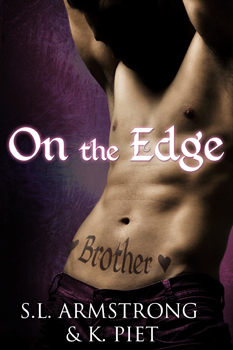 It wasn't the clattering in the kitchen that woke him. It wasn't the smell of coffee and bacon. It wasn't even the flavor in his mouth, which reminded him of a rug after a three day house party. What woke him was the lack of warmth beside him. Andrew blinked several times, but the light pouring in from outside blinded him for a moment. He rubbed the sleep from his eyes, and then focused on the empty space beside him.

Then his eyes moved over to Ben's hastily made bed.

Ben hadn't slept with him last night. Christ. When was the last time that hadn't happened?

Andrew rolled out of bed, his head pounding, and slunk into the bathroom. The sound of his razor was like a jackhammer, and the shower was a rushing, thunderous sound that made him want to throw up. He was getting too old for this shit. Two years out of college, and he was still partying like he was eighteen. After a quick shower, he brushed his teeth. Twice, for good measure. He was feeling moderately human by the time he stumbled out into the main living area.

Just an old TV, some bookshelves, a worn sofa. A breakfast bar and a bistro table. It was nothing special. They didn't need anything special. They needed cheap. Cheap was small, sparse, and outdated. Ben was in the kitchen, already showered and dressed. He looked like he'd been up for hours already. Andrew hated that. Hated how easily Ben rebounded from their club nights.

Then again, Ben didn't drink or do drugs.

"Good morning, sunshine," Ben said, shoving a plate of toast, eggs, and bacon across the bar. "I have water and orange juice waiting for you, too. You're probably dehydrated as hell."

Andrew hefted himself up on a bar stool. "Thanks." He dug into the eggs and toast, finishing the orange juice in three gulps. Ben quickly refilled it. "You slept in your bed?"

"Because you're a selfish asshole, and I didn't need to feel like shit come morning when you shoved me away." Ben turned around, pouring himself a cup of coffee. "I have to run to the office for a couple hours. Think you can take out the trash and do some laundry?"

Andrew sighed. "I can do that."

"Good." Ben grabbed his briefcase. "I'll be back by lunch."

Without thinking, Andrew's hand shot out and grabbed Ben's wrist. "I don't always push you away," he murmured.

Pain and doubt streaked through Ben's eyes. "I can't remember the last time you woke up and held me." Ben kissed Andrew's forehead. "Try to do the dishes, too."

Before Andrew could think of something to take away the hurt look on his twin's face, Ben was gone. Andrew sighed, drinking half his water between bites of food that fell like lead weights into his stomach. Why was it always so difficult? Why couldn't he just... enjoy Ben? Just thinking of the sex they shared—that he vaguely remembered—brought a flush of shame to his cheeks. Every week, he told himself he wouldn't do it again. Every week, he swore he wouldn't fuck Ben again, and every week, they ended up a tangled mess in the sheets.

And then, the morning after, he would swear that this would be the morning he told the world to fuck it and just embraced his love for Ben.

Every week, he failed.

Shame versus guilt. It felt like a never-ending battle between the two. Ben was his brother, and that was supposed to make what they did wrong. But if it was wrong, then he would feel a certain righteousness after pushing Ben away afterward, right? He should feel good about breaking his brother's heart so they might not do it again. Of course, he never felt that way. All he could feel was dirty—not just for fucking his brother, but for making that look cross Ben's face over and over. That look that asked Why? Why was he doing this? Why did he pull them close only to push them apart?

There wasn't a good answer to that, only an embarrassing one. Andrew was a coward. In moments like these, when he was left alone to recover from his bender himself, he could admit he was chickenshit. Only a coward would do this to someone they loved. Especially someone like Ben. Ben was everything a good man ought to be. He was educated, had an amazing job, and took care of family. Next to Andrew, Ben looked like a fucking saint.

It was Ben's job in IT that brought home the bacon in their measly little household. Ben might be a big geek, but he wasn't a recluse. He was vivacious, well-liked, and he had a smile that lit up a room. In every way, Ben made up for what Andrew lacked, from a steady job that paid the bills to a spirit that tried to see the best in everything.

What good had he given Ben to focus on? Not just last night, but all the other weekends. Why should he even leave it at that? Their whole lives, he'd been more a burden on Ben than anything. Andrew was the eldest by seven minutes, and he was supposed to set a good example. Instead, he'd always gone against the grain. He'd been the outsider who hid under the stairs of his high school commons, skipping classes and just barely scraping by on his grades so he could get a college degree in music.

Music. His job. Not that it could really be called a job when he had no paying gigs. He wasn't the best performer, and no one was biting with his lyrics. Only way to get anything done was open mic nights, and those seemed more trouble than they were worth.

Andrew groaned and let his head fall forward to the counter next to his empty plate. He needed to write, needed to sit down at his keyboard and work something out. The melodies weren't difficult, but the lyrics were slow to form. If he got more than two lines out of his muddled head today, it would be a goddamn miracle.

Summer of Denial
habu
In Shelf
$3.99
Tweets by
sirenbookstrand