Pull of the Groove (MM)

Is Krit so lost in servicing “the groove,” that he can’t take pleasure in a more loving and sensual give-and-take sexual relationship?

Mixed breed Krit, brought along with his mother to the States from Thailand by an abusive Navy man stepfather, has been bred from the time he graduates high school to be an “anything goes” rough-sex rent boy. It is a life that Krit thinks of as “the groove” and as his natural lot in life.

As soon as he is able to break away from his abusive home situation, Krit leaves the area of the Norfolk Navy bases for Philadelphia. But “the groove” of servicing Navy men, who are drawn to his androgynous nature, is so deeply engrained in Krit that he relocates near the Navy shipyard there and continues his life of street male prostitution. He falls into a life of cruising the parks for men with fetish tastes that include rough sex, bondage, sounding, cross-dressing, and double penetration, and he becomes so used to being used roughly that he believes he is completely immune to any emotional attachment to sex. That is until he meets young, naïve, but hunky Navy sailor, Austin, who is looking for a first male-male coupling and is determined to pay to have it with Krit. 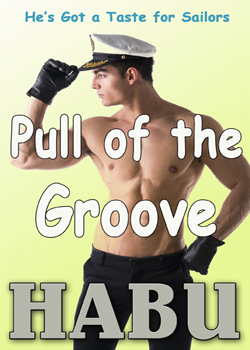 Pull of the Groove (MM)

There was no question that the handsome young man was Navy. He was standing across the cafeteria table from me decked out in pristine Navy enlisted whites from the circular cap down to his broad chest of white tunic with navy-blue turtleneck underneath and blue string tie to his slim waist wrapped in a thick white web belt and polished brass buckle, and on down to white trousers gathered into white leggings and spats covering shiny black boots. If he was older than I was, it wasn’t by much.

There also was little doubt that he was nervous as hell. He was carrying a cafeteria tray, but there was little on it and it kept wobbling around on the tray, which he held with white-gloved hands.

“Excuse me. Is this seat taken?”

I looked around and saw other tables with empty seats, but he looked so good to me that I happily said, “No, it isn’t. Join me.” I realized then that I’d seen him before—several times, in Marconi Plaza park, but in T and shorts, not Navy whites. The Navy whites, although spiffy, didn’t do justice to how muscular and cut his body was. I could have sworn that he’d seen me there too.

“Sorry for the whites,” He said as he set his tray down. “Just came from the yard. Parade today.”

We were at a cafeteria next to FDR park, which was just a short distance from the Navy Yard. This was where I usually ate lunch on Saturdays. I liked hearing the sounds from the baseball stadium, just a couple of blocks to the east.

“Oh, I thought that you wore them just for me,” I said. He gave me the impression to be very proud to wear that uniform—and he had every right to be; he looked terrific in it.

He blushed as he sat down, and I could tell I’d scored a point. He had been interested in me when we’d been in Marconi Plaza park at the same time. In any event, he’d scored a point too. I melted at the look of him in his Navy whites. He was young, my age or maybe a year older, and in superb shape, as I could remember from seeing him in his athletic gear and playing volleyball with his mates in the park. And he was ruggedly handsome and refreshingly shy at the same time.

We were both quiet for a few minutes as we ate, although I could tell that he was just busting to talk, and to finally blurt it out—why he was approaching me. By then, when he said it, I wasn’t a bit surprised.

“I’ve seen you in the park—in Marconi Plaza park—a couple of times.”

He hesitated here, but took a big breath and proceeded. “And I saw you walk over to that bar on 10th. Sometimes with men.”

“Yes, I guess you would have seen me do that.” I wasn’t going to make it easy for him. I thought his nervousness and his obvious need were precious. And, god, he was a hunk and a half.

“You know what kind of bar Merry’s is, don’t you?”

“I guess I would,” I answered. “It’s where men go to pick up other men to fuck. It’s where I pick up men to pay to fuck me.”

He lowered his head and blushed again. And he shuffled about like he was thinking of leaving the table. I reached over and put my hand on his forearm. And then the image of the ghoul having done that to me just a few days previously to detain me floated through my mind, and I withdrew my hand. Instead, I pressed the knee of one of my legs between his under the table. I didn’t want this one to get away.

He gave a start and looked up at me. But he also pushed his knees together under the table, trapping mine between them.

Angry as a Dragon (MM)
Marcy Jacks
In Shelf
$3.99
Tweets by
sirenbookstrand