Rise of the Symbionts 1

Kallen has been away for two years to further his education. En route to his home planet, Oryon, his starship is attacked by unknown brigands. All fear the death of the heir to the kingdom, as well as those of his accompanying loyal guardians.

With Bobik’s assistance, Lando Garr is the one man who can find and rescue Kallen. Not because he’s bound by duty as a Royal Guardian, but because the prince’s symbiont responds to no other but him. Both will stop at nothing to find Kallen. Losing him would mean Bobik’s death and Lando’s heartache.

Rise of the Symbionts 1 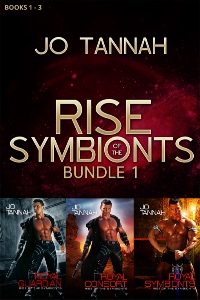 Twelve-year-old Cadet Guardsman Lando Garr stood at the entrance of the bazaar, craning his neck as he gaped in wonder around him. He and his companions, Bradan and Adnah, stood off to one side, silently observing the children playing in the narrow streets, the men who sat in groups pulling long drinks, and the women perusing stalls displaying brilliantly colored fabrics and elegantly designed perfume bottles. Before them were wares for sale and a lot of food to eat.

The three boys sniffed appreciatively at the wonderful scents of cooking food before turning to each other, grins briefly splitting their faces. When they turned back to the bazaar, the grins had been dropped and replaced with expressionless masks of calm and quiet observation.

To the observant, there was no mistaking the excited glints in their eyes and the skip to their steps as they stepped inside the crowd and joined the hustle and bustle of the fair. People nodded respectfully when they saw the insignias over their breast pockets, but those who noticed the badge on Lando’s shoulder, be they young or adult, gave way and stepped off to the sides.

Lando, Bradan and Adnah were no ordinary young men. They were genetically designed soldiers, or guardians, as they were referred to by others. Created for the sole purpose of security duties, they’d been born and raised within the confines of the royal palace training grounds. They knew no other life outside of their rigorous training and education except on days like those.

When he’d been six-years of age, Lando tested positive for Level 1A Security, making him one of the twenty Level 1A Security on his planet. Bradan and Adnah had tested Level 1Bs, making them Lando’s logical teammates as well as friends.

Young as he was, his intelligence and skill matched those of lower level categories who’d already had years of training over him. His being a Level 1A also made him eligible for the sought-after assignment of Royal Guardian. Of course, there had been no guarantee he’d be granted the position, especially since at the time of his eligibility, King Arzhur been unmarried and without an heir. He didn’t have to wait too long. The king got married two years later, and the year after that, the prince was born.

Unfortunately, the beloved Queen Arianna died in childbirth and King Arzhur’s grief knew no end. He withdrew from public eyes, and Oryon fell into despair. Weeks later, the doctors proclaimed the new prince had tested positive to technomagical talents. As though bolstered by the news, King Arzhur resurfaced from seclusion and pronounced that from that day forward, his son would be known as Kallen, an old Oryon name meaning source of all hope. Unknown to the people of Oryon, Kallen was also found to be a sickly child.

The royal birth left no question in Lando’s mind on what he wanted to do. He volunteered for the job and was immediately accepted by the king. When his appointment was met with criticism, citing Lando’s immaturity and lack of experience, King Arzhur defended his choice, stating his son would need someone closer to his age growing up. Despite the grumbles, no one dared question their king’s decision, and Lando was signed in as a Royal Guardian in training under the tutelage of Level 1A Security Cheol himself, Lord Commander Militant, former Royal Guardian to King Arzhur, and close confidant.

Lando, as well as his two friends Bradan and Adnah, were among three others who’d been assigned rooms in the royal nursery wing. As Level 1B cadets, Bradan and Adnah had been Lando’s choices to take with him to his new assignment. He trusted them to guard his back and, should he be away on other assignments, to keep Kallen safe in his stead. Together, they would be the three closest to the prince, guarding the heir with their lives, as well as being friends. Currently the youngest in his category and rank, Lando was considered a lowly cadet-guardian assigned to the prince’s close-in security detail. However, it was soon apparent that his status would change. He’d already proven on numerous occasions that he was a valuable asset in keeping the prince safe.

As for Lando, he never regretted his decision to volunteer for the job. One look at his future leader’s violet eyes and he made a promise to the silent newborn that he would do everything in his power and skill to guarantee Kallen’s safety and survival. No harm would ever fall on his prince, never on his watch.

Although his security clearance was not yet top level, eventually that would change once Lando reached maturity and became a fully pledged Royal Guardian. Then his clearance would only be second to that of his king and Lord Commander.

Should he decide to leave his assignment, Lando’s job would be to protect high-profile and very important individuals. When assigned a security task, his command would override the wishes of those under his protection until he had delivered them safely to their destination. It didn’t matter if his wards were political leaders or members of the royal family. His word was law until someone of higher rank, like the king or Cheol, overrode it. It was a position held in awe, and rightly so. The thought of such a responsibility would have daunted others, but not Lando. His genetic design didn’t allow him to shirk responsibilities or fear a challenge.