More and more, accountant Scott Gammons is having fantasies about dominating women. He looks at pictures showing pretty faces looking at him while strong men sexually use them and it turns him on. One day by sheer chance he reveals his fantasy to a former lover, April Menendez, who works at the same firm Scott does.

April is shocked, not by the nature of the Scott’s fantasies, but by what she knows about Scott after their abrupt breakup two years before. Her life has changed markedly since then while Scott still stumbles through life in denial of his true nature. April did what she felt she had to do when she suddenly broke up with Scott, but now she feels guilty because she didn’t reach out and try to help him.

April goes home and talks with the new boyfriend, Paulo, and they decide Scott has a problem and April, if she’s willing, can help. Helping means April has to assume a whole new persona, one she has little experience with, but with Paulo’s guidance she feels she can.

However it remains to be seen if Scott will accept what he is and stop suppressing it like he’s done all his life. Does he have the courage to reveal his true nature? 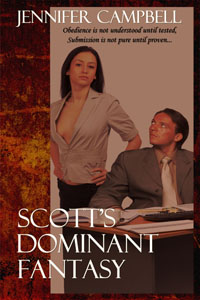 Once we got into April’s jeep things seemed to speed up, and I don’t just mean her driving. After her rushed drive across town, we arrived at the same address she had lived at before in a modest, middle-income apartment building. Memories came back to me as we ascended the stairway to her third floor abode. The last time I’d seen these stairs was on that dreaded Saturday night.

However when she opened the door, I saw how different things were inside her abode. Back then, April’s apartment had been a colorful place decorated with her distinctly female touch which included lots of green and yellow, flowers, and burning incense, but now there was little evidence of the colors, just one vase of flowers, and no incense. It seemed clean and neat, but much more Spartan, like a military barracks, than before.

The first thing to make me nervous were glaring signs of male cohabitation. The twenty inch TV April and I had often watched SouthParkon was now a massive wide-screen monster. Then I caught sight of a very advanced piece of exercise equipment hanging on the door to the bedroom. I recognized the equipment from its TV ad which was expounded by an MMA superstar who claimed if you used this equipment you’d get ripped fast, building bulging muscles and killer abs in weeks if not days. This seemed a clear indication April’s new boyfriend lived with her and it made me quite uncomfortable.

April must have noticed me staring at the equipment and no doubt my face betrayed a certain portion of my nervousness about the situation. She tried to calm me. “Relax, he’s at work and will be until eight tonight. You’ll be long gone before he gets home. Go ahead and sit down on the sofa.”

Somewhat relieved, I took the offered seat, but my mind forced me to ask her a pointed question. “April, I have to ask this, does your new boyfriend know I’m here?” It seemed like an intelligent question, but I was in no way prepared for April’s response.

“He does, in fact Paulo and I discussed you quite thoroughly and it was he who recommended I try to help you. Those days I delayed and didn’t speak to you, I was taking time to get used to the idea Paulo proposed to me. You see a lot of his plan depends on me changing and doing things I’m not used to doing.” April paused and then sat down beside me on the sofa. “Are you hungry, Scott, or do you want to get right to this?”

None of what she said about this Paulo and his plan made any sense to me, but I certainly wasn’t thinking about food. “Let’s talk; I need to understand what’s going on.”

April placed her hand on my crotch and felt me. “You’re not hard now, Scott. Is that because Paulo lives here and I’m his girlfriend?”

Oh god, what is going on here? April’s question freaked me out and made me wonder if they were looking for some sort of kinky ménage’ a trois with me?

“Well . . . I don’t know. It’s weird being here and realizing you’re with another guy. It sorta freaks me out a little, but what I don’t understand is how this relates to my fantasies or why you dumped me?” My question was purely defensive.

April released her long raven hair from its put-up office mode and shook it out. “Okay, but one more question before I answer that. What exactly do you remember about our breakup, specifically that Saturday night?” April gave me a look which told me this was an important question to both of us.

“I was here, you asked me to spend the night, but then your folks called. A family friend had died and they wanted you to come over. You asked me to stay here while you did and when you came back we had a huge fight. You were screaming and crying and then you threw me out. That’s about all I remember.” I was being as honest as I could be because I really didn’t remember any more.

“So you really can’t tell me why the fight started or what you were doing when I came home?” April insisted I confirm this point.

It was embarrassing, because I knew I should remember, but I didn’t. “No, I can’t remember. That why I was so upset Monday morning when I begged you to reconsider.” I paused when a terrible thought came to me. “Oh my god . . . did I do something to you? Did I . . . hurt you?” It seemed impossible to me, but it would have explained her anger at me.

“No, Scott, not physically. It’s almost funny you should say that because it’s so far from the real issue.” She paused a moment and then started again. “You’re in denial, Scott, deep denial, but Paulo says I can help you. In fact he says I may be the only person who can help you, but if I do we’re going to do this my way. First I’m going to reveal myself to you. I’ll show you the new April, who is a person you don’t know. Then if all goes well you will reveal yourself, or perhaps I’ll try to force you to see yourself because that’s where the problem lies. Does what I’m saying make any sense to you?” She looked at me with hope in her eyes, but I was one woefully confused and freaked out guy.

“Not really, but I trust you.” I replied sincerely.

April pounced on that. “Good, hold onto that. We may need it. When I dumped you back then, I felt like I abandoned you because I couldn’t handle the situation. I’m stronger now, because of Paulo, and I want to help you. I really do.” The look in April’s eye as she said this to me told me she was sincere, she did care about me.

“Okay, I understand, so what happens now?” Being worried, I was anxious to move the process along.

April stood up. “I’m going to the bedroom to change. In a few minutes I’ll call you in to see the new April. I know this is weird, but bear with me, it’s my way of telling you.” She touched my face and then made her way across the living room to the bedroom door.

While she was in the bedroom I wondered what the new April would be. How had Paulo changed her?

April had left the bedroom door open a crack and finally I heard her sexy voice. “You can come in now, Scott. It’s time to meet the new April.”

As I stood up, I realized two things. One was my hands were shaking, but the other was my cock had become rock hard. My erection seemed like it should be normal, in anticipation of going into April’s bedroom, but my fear and nervousness made me want to run away. Unable to stop thinking of her Pandora’s Box warning, I had to will my feet to walk toward the bedroom door, but when I got there I stopped. I could just leave, call a cab, and go back to the office. I don’t have to do this.

Then April’s voice came again. “Please, Scott, don’t be afraid. I promise you I’ll be with you every step of the way. I want you to find the happiness I’ve found.” Her voice soothed me and gave my confidence a boost enough to grasp the knob of the bedroom door.

Once I pushed it open, another part of me seemed to take over. There seemed to suddenly be something deep inside me that understood why this was necessary. I might want to run, but this other me sensed moving forward was the only way to go.

It was darker in her bedroom compared with the living room so until my eyes adjusted to the diminished light I couldn’t see much, but when I could finally see what I saw I was nearly unable to believe.

There was April sitting up on her bed completely naked, but she was more than just naked. Oh my god, she’s a . . . submissive.

My dream girl was dressed in a manner of speaking, as a sex slave. With her throat embraced by an ominous, black leather collar, April’s eyes were covered with a blindfold and her nipples were clamped with tight metal clips.