These seventeen stories, in the second of habu’s two “Spy Tails” anthologies, show an aspect of intelligence work very much in the vein of Graham Greene and John LeCarré but delving into spy craft operations that go well beyond where either of these authors dared to go. The reality of spying is that it isn’t all Agent 007 glamour. There is a nasty, cynical, and even arousingly sexual underbelly to it, and these stories don’t shy away from showing that, or from ignoring the difficult questions of the morality of taking advantage of the vulnerability and weakness of men who have a weakness for men in the pursuit of chits in the power games of nations. These stories not only show the substance of spy craft, but they also show how men are suborned to be U.S. intelligence Candy Store unit agents and then how they use other men to extract what their handlers want.

If you are interested in the intersection of spy craft and man-on-man action, both volumes of habu’s Spy Tails should be on your “must read” list. 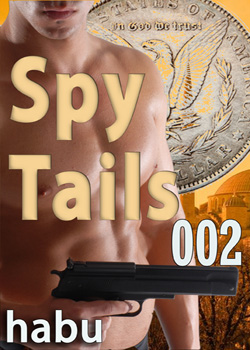 From the short story “The Art of It”

“Hello, you must be Shayne. I’m Mr. Caldwell’s houseboy, Jerome. Come on in. I’ll take your bag to your room. He’s out beyond the great room, in the pool. Go on back.”

Ted Caldwell’s houseboy was a surprise. He certainly didn’t look the least bit boyish, although he looked maybe four or five years younger than me—barely twenty. He was a chocolate brown and obviously worked out a lot. He’d answered the door in just wide-legged white muslin pants that rode low on his hips, and he was barefoot. Other than that, he was all muscle and male model looks. I could see that the New Jersey shore was a whole lot more laid back in midsummer than Manhattan was. . . .

The wall toward the ocean in the great room was one whole expanse of window, and I could see the gray head of a man swimming laps in the terrace pool beyond, breaking water at a good, fast pace as I walked through the room toward the sliding glass doors to the pool area. He apparently saw me coming and was rising out of the pool as I came through the door.

Yes, indeed, the Jersey shore is far more laid back than the city, I thought, as I watched him emerge from the water. He was nude. . . .

“Is that you, Mr. Tanner from Spy magazine, come to suck this old man dry?” He called out to me. “Come. Come out to my playground.” He smiled, a very nice, disabling smile as I gulped through his colorful double entendre reference without being able to discern that it wasn’t a well-turned and apt phrase. I had enjoyed his book, The Candy Store, supposedly about a special sexual favors unit of the CIA—at least the writing style—and I felt yet another of my spiteful prenotions dropping and shattering on the patio tiles. It was quite possible that he was facile enough with the language to have actually written his book himself. The critical undercurrent of the structure I’d already preprogrammed for this magazine interview was quickly being shredded into tatters. I was left with trying to tie him up in lies and contradictions.

“Umm, sorry for surprising you this way, Mr. Caldwell. And please call me Shayne. And as for coming out into the hot sun . . .” I spread my arms, bringing attention to the three-piece suit I was wearing. . . .

“Surprising me? Oh, no, dear boy, you arrived within a couple of minutes of when I expected you. So, you seem to be the obsessively punctual type. We’ll have to see what we can do about . . . how we can help you prolong your pleasures. Do call me Ted—or daddy, considering the differences in our ages. Oh, no, that wouldn’t do. Jerome calls me daddy, and it would be so confusing when the three of us were together. Oh, sorry, I’m prattling again, and you’ve dropped your jaw.”

I indeed had dropped my jaw. The innuendo he was throwing in there, the breezy “but of course we all are on one page with this” talk. It was straight out of his book. It should have put me off in reading the book, but, strangely enough, it hadn’t. It had made me feel warm and wanting to think of the possibility of being in his world, which seemed so open and easy. It was like chocolate; I had felt evil in indulging in the book, but I read it to its completion and wondered what deeper level he could talk to that he hadn’t put in his book.

This feeling that I only now was intellectualizing, coupled with the man just standing there toweling off his head and chest, with the water dripping down the white, now nearly transparent front panel of his shorts, was making me feel a little woozy and dangerously aroused. But Caldwell had prattled on while I was spaced out.

“No suits allowed on the Jersey shore in the summer, my boy. What you are wearing will not do for another second. Take that off on the spot. Here, here is a swim suit. Put this on right this instant. Here. Then you can take a cooling swim, and Jerome will bring us some drinks. I have a special cocktail for you to try. It’s got passion fruit juice in it.”

He was moving toward me, holding out a skimpy Speedo and capturing me with laughing eyes that were a pale blue.