Kathy Stevenson wanted a new life. After years of abuse she may just get her chance with Texas Oilman Widower Quinton Palmer. But her happiness could be short lived because of her past. Workaholic Quinton Palmer takes a overdue vaction at a casino. Wanting to relax and play some poker he didn't expect to meet a beauty like Kathy. When he finds out her full name all he can see is revenge. Will he forgive or let her go?

Kathy Stevenson thought it was time to clean out her late husband, Ryan’s, things. His clothes still remained in the closet, and frankly she was tired of looking at them. She had to move on with her life. Staring at his shirts daily wouldn’t bring him back. Her friends offered to help, but she declined the offer. She’d already called for a truck from the local thrift store to come get his things. She had two days until the drivers would show up. Kathy taped up several boxes and placed them outside the bedroom. It was a good place to start.

She took out his shirts, placing a huge pile on the bed. Kathy wanted to go through them one by one to check for rips and missing buttons. She started making two piles, one to throw away and the other for the thrift store. Several shirts were brand-new; someone could get use out of them. Looking at the shirts reminded Kathy of how abusive Ryan had been at times. If she didn’t iron them the right way, he’d hit her. After a few times of being hit, she tried to get the laundry done early, before he got home. The abuse didn’t stop there. It had only been the beginning.

When she finished with the shirts, she started on his dress pants, checking the pockets for rips. The man had a lot of clothes, but he insisted on it. She felt something in the pocket of the last one. She thought it was a hankie so she pulled it out. She was shocked to see it was a woman’s thong. It sure in the hell wasn’t hers.

Two years before his death, Kathy had started noticing changes in Ryan. He came home late, and he had stopped talking to her about things. The morning kisses and pats on the ass stopped too. When he started talking about buying a sports car, it surprised her.

How long had Ryan been seeing the woman this belonged to? Maybe that explained the changes she’d seen in him over the last few months before the store shooting. Whoever the woman was, she had ugly taste in underwear.

Kathy had shed thirty pounds over a year ago, and she still wouldn’t wear such an ugly piece of butt floss. At first, she lost the weight thinking Ryan would treat her better, but it didn’t work. She bought sexier clothes, and she looked damn good in them too. Least that is what she thought. He hated them. Hated a lot of things it seemed the more she thought about it.

After she’d worked for several hours, the bedroom, bathroom, and garage were done. So far, she had twelve boxes filled for the thrift store. His office was the next project. She wasn’t looking forward to it. He used to complain about the house being dirty, and he’d take it out on her. The only place in the house that was dirty was his office.

The bookshelves were cramped full of repair books, gardening and travel magazines, and some other stuff that didn’t interest her. Therefore, she quickly loaded those into a box. His desk she left for last. Papers were everywhere.

It had taken two hours to go through everything in his desk. She was exhausted but wanted to finish it up. One by one she emptied the drawers, trashing most of what was in each one. She had one more to empty, the bottom one on the right side. Kathy sat on the floor and began to open it. The first thing she pulled out was a cock ring, which hadn’t been opened. The label read it was for couples, and the price tag said it was one hundred and forty dollars. She felt the screams of frustration at the back of her throat. She really didn’t know Ryan at all it seemed. She sat there for several minutes, blank, amazed, and shaken.

The next item she pulled out happened to be eatable underwear for men. She couldn’t believe Ryan had these things. Did his mistress buy them for him? Or did he buy them just to keep the mistress interested in his small dick? She was down to the last item, a brochure it looked like. She was about to toss it when two paper items fell out. Kathy picked them up and just stared. There were two airline tickets to Branson, Missouri. From the dates on the tickets, Ryan purchased them two weeks before he died. Therefore, he was planning a trip with his mistress to a casino. He’d known Kathy wanted to go for years, see some shows, and try a little gambling. But he refused to go there, said he wasn’t a gambling man. She held back tears of disappointment and silently swore no man would ever hurt her again. She needed to get away. It was time to stop grieving over a man she didn’t know. She was going to Branson, Missouri, take in some shows, gamble, and spend his money to celebrate her freedom.

Widower and oil tycoon Quinton Palmer had pretty much everything he’d ever wanted. Great friends, wonderful family, and a job he loved. The only thing he didn’t have was Grace, and he wanted her back most of all.

A week ago, during a family gathering, his mother took him aside and gave a lecture on him working too hard. He loved his family, but sometimes he wanted to tell them to stop fussing over him. His brothers suggested he should take three days off for some rest and relaxation. He was a big boy. He could decide for himself if he needed a vacation or not, though he couldn’t remember the last time he had one. So maybe the idea of getting out of Beaumont, Texas, for three days wouldn’t kill him. He did enjoy playing poker and blackjack and the whole casino atmosphere.

When his wife became ill the first time, Quinton promised her they’d take a vacation. Between working in his father’s oil business and her illness, it never happened. The second time Grace became ill, he promised they’d go for sure. The vacation was all planned out, and a week before the trip, she’d died. Two years later he still hated himself for not taking her.

Quinton had been married to Gracie for twenty wonderful years. She put up with his stubbornness, long hours at work, business trips, and his temper. He missed her smile and the sound of her laughter at his bad jokes. Since her death, Quinton saw her face in his dreams and felt her warm body next to his. Most nights he dreaded coming home because the house was so empty without her in it. He had to get on with his life because she wasn’t coming back.

Quinton arrived at the Radisson Hotel; it was a great place to stay. He’d been there a few times before, but it had been awhile. It was one of the largest hotels in Branson, over four hundred rooms and suites. With long, purposeful strides he entered through the lobby doors. The interior was dark brown with tan accents. The lobby chairs were of red velvet and the carpet dark red with white flower designs. On the left side of the lobby was one of the two restaurants in the hotel. The Wilderness Bistro had great food the last time he was there. On the right, Home Run Sports Lounge had great hamburgers, one of his favorite food vices. If Grace was alive, she’d probably kick his ass for it.

He started walking toward the front desk but stopped suddenly in his tracks. A curvy brunette in front of him caught his eye. God, he loved curvy woman. He could see only the back of her, but what he could see he liked a lot. Her light brown curls hung down to the middle of her back, just the right amount for a good tug. His fingers itched to grab a handful while he licked her neck. He was six-two, and he figured she was at least eight inches shorter.

It took Quinton several minutes to check in and get his room key. His turned to look at the brunette one last time, but she was already gone. He wondered if she was with anyone. Did she get one of the rooms with a king-sized bed in it? He could picture her on his king-sized bed with her ass in the air as he fucked her. What the hell? He didn’t even know this woman and already he had her in his bed.

Quinton quickly made his way to the elevator that would take him to the fourteenth floor. During the ride up, he thought more about the brunette. He’d hoped to run into her in the elevator, but it didn’t happen. He gazed at the woman who came in after him. She was a brunette, but her hair was straight and she was taller. Damn it! How could she get away so fast from him? He wondered what floor she was on and if he’d see her again during his stay.

He stepped out of the elevator and started walking toward his room. He was almost to his room when he spotted her again. Quinton couldn’t see her face, but he knew it was her. It looked like she had trouble entering the room. Maybe he could ask her if she needed help, and then he would get a glimpse. He was just about to speak when she entered her room. Fuck!

He broke out into a small grin when he realized her room was next to his. He entered the room and glanced over at the king-sized bed. The room was decorated in brown and white. On top of the large dresser was a TV. He didn’t plan on watching it much unless he wasn’t having any luck at poker.

He planned on taking a short nap, showering, and dinner all in that order before hitting the poker tables. He quickly took everything off, including his briefs. He always slept naked, even for short naps.

He was afraid to wake up because he didn’t want it to end just yet. With his right hand wrapped around his cock, he began to pull and squeeze harder with each stroke. His hips rocked upward and his breathing became faster until finally he released his seed onto his belly.

“Fuck!” It took him a few minutes before he realized she could’ve heard his moans. He didn’t ever remembering being this loud before. Would he be able to look her in the eye after this? 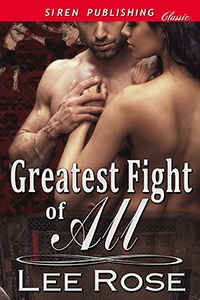 One Time Only
Dorothy Kane Liddle
In Shelf
$3.99
Tweets by
sirenbookstrand