On a hot summer’s day Kerry-Jane is walking home through the park, and dares herself to strip to her pretty underwear to sunbathe in a secluded area. She flirts with two hunks working in the quiet place, and teases them by telling them her plans.

When the men call her bluff and tell her they’ll look after her while she relaxes, Kerry-Jane has to ask herself if she has the nerve to undress. If she does go through with it will she decide to encourage the hunks’ interest and take things to the next level?

The park was quiet, despite spring’s sunshine warming the afternoon. Kerry-Jane eased her black hair aside to pull her phone’s buds from her ears and enjoy the sound of sparrows chattering.

She congratulated herself on taking a half day after her nerve-wracking presentation, and decided the ice cream hut coming up on her left was the most tempting thing she’d ever seen.

I’ll have one while I’m walking.

She bit her lip while thinking of the secluded, quiet area coming up on her right. Or, maybe I could sunbathe there, instead of waiting until I get home. My undies look enough like a bikini. In this weather, the thought of feeling the sun touch her skin, of discarding her formal navy skirt and jacket, was an inviting one. Especially with an ice cream. And nobody ever goes there. She swallowed as she dared herself. Do they?

“Feel good. Pretty underwear. That’ll all give you confidence for the presentation,” her friend had said.

Amy was right. I felt good and sexy. Kerry-Jane thought of the quiet area. I still feel sexy. She ached to remove the jacket she had kept on even during the presentation’s heat, but knowing her white shirt was almost see-through had her thinking twice.

Why not, I’ll still be decent. And the sun is hot.

A cyclist approached and looked her up and down. They exchanged grins as he passed, and she turned to admire his thick legs.

After looking around and seeing no one else, she shrugged the jacket off and draped it over her arm.

As Kerry-Jane rounded a gentle curve a large pickup came into view. Shielding her eyes from the sun, she saw two men. One pulled lengths of fencing from the back of the pickup while the other pushed the fencing’s feet into concrete stands to the right of the path, cutting off an area of lawn all the way to the perimeter fence fifty yards or so beyond. It was the men who drew her attention, both in cut-off jeans, one topless with short blond Scandinavian hair, blue eyes, and muscles glistening with early afternoon sweat. His friend wore a checked shirt with the sleeves cut off. He was suave and Latino with his natural tan and designer stubble.

She paused, recognizing them instantly from work they’d done at her office. Paolo and Stefan. They’re gorgeous. Her heart beat a little faster as she approached.

“Wow,” she muttered. She imagined their gazes slipping to the hint of floral prints on her silk and lace bra showing through her shirt. She wished she’d thought to undo a shirt button, to give a glimpse of cleavage.

The men stalled, watching her approach. Stefan said something, and Paolo nodded.

I’ve got it, then. When she reached the men she grinned, and they returned her smile with two pairs of eyes gently gazing at her as she stuffed her earbuds into her shoulder bag. “Hello again,” she said.

“Stefan and I were saying how good it is to see you again.” Paolo extended a hand.

Stefan’s fingers were masculine too, like his naked torso which Kerry-Jane had trouble keeping her eyes from. He said, “We were right. We knew it was you, even from a distance.”

“We’d always remember someone as lovely as you. You are beautiful, my English rose.” Paolo sighed. “Bellissimo. You have an aura of perfection. We’ll never forget your long black hair, or the sparkle in your emerald eyes when you treat us to a smile, or your model’s shape.”

Ooh, he’s good. As well as stunning, with his deep brown eyes and two-day-old stubble.

She giggled at his attempt not to laugh, while enjoying the sight of sweat glistening on his contours. Her skin tingled at the chance to enjoy two hunks’ company. “I suppose you’re not bad.”

“Not bad. I suppose we’ll have to accept that,” Paolo said.

She parted her thumb and forefinger about half an inch. “Maybe slightly better than not bad.”

Paolo placed his own thumb and forefinger apart, mimicking Kerry-Jane. “Is that in the same way you’re slightly better than not bad?”

“Are you flirting?” Stefan asked.

“I suppose I am,” she admitted.

“I thought so. When we worked at your office, you refused,” Stefan said.

Kerry-Jane pushed aside a tinge of sadness. “He’s not a factor anymore.”

“I’m so sorry to hear that.” The palm Paolo placed on Kerry-Jane’s shoulder was comforting and sympathetic, not predatory, and she missed his touch when he withdrew it.

She changed the subject. “Why are you closing this area?”

“The Water Board wants some pipes laid here, and it needs fencing off before trenches are dug. Health and Safety and all that.”

“Ah. It’s a relief the park’s not going to be turned into flats or offices or anything.” She cocked her head in mock distress, deciding to tease. “It’s a shame. I was thinking of sunbathing.”

The men’s brows rose. Stefan ran a hand through his closely cropped hair. “Were you just going to wear the pretty clothes I can see through your shirt?”

She looked down as a pleasant tingle touched her skin. They noticed. “I suppose it is a bit see-through.” A sudden fantasy of Paolo and Stefan working around her while she relaxed in silk and lace had her swallowing. She laughed to let them know she only flirted.

Stefan grabbed a section of fencing, and pulled it away from the next length to make a gap. He winked. “No one will know.”

Paolo’s laugh was gentle. “I think we’ve called your bluff, as you English say.”

“I think you have.” A delightful swirl of anticipation and mild fear in her tummy made the decision. “But it’s a warm day. Maybe a quick sunbathe can’t do any harm.”

Stefan’s brows rose. Paolo’s tongue flicked his lips before he said. “You don’t have to. We were teasing. Please, amore, continue on your way. You’ve made our day by simply stopping to talk with us.”

Amore. Ooh… Her tummy’s swirl became a flutter of countless butterflies as Kerry-Jane dared herself to slip between fencing sections. “No, a sunbathe would be great.”

The men grinned while shifting the fencing to reclose the gap. Stefan swept an arm around the space. “Please, my dear, choose wherever you desire.” 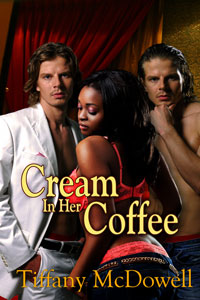 Cream in Her Coffee
Tiffany McDowell
In Shelf
$1.99

The Hunter and Her Mates (MFM)
Jane Jamison
In Shelf
$4.50
Tweets by
sirenbookstrand