Dubbed the Kat Lady by her roommate, Kat Munroe admits to an ulterior motive for rescuing strays—a chance to visit the cute Dr. Evan Cole at the vet clinic. He makes her heart purr as much as her kittens do. Determined to ask him out before he thinks she’s some crazy cat woman, Kat works up her courage for the next visit.

Evan Cole doesn’t see many females other than the animal variety at his veterinary clinic. Always a believer that the right woman will walk into his life someday, he made everything else—vet school, his career—a priority over searching for love. But from the day Kat Munroe walks through the door with a stray feline rescue, his heart beats to see her again. His dilemma—how to create the perfect romantic date when you’re clueless about dating?

When they finally go on a date, disaster strikes at every turn. Will they be able to handle the menagerie? Or will they decide that more isn’t merrier?

Katherine Monroe blew her bangs upward, then heaved a sigh. “Not helping, Kit.” Katherine, or Kat, as most of her friends knew her, snuggled with the newest kitten and murmured to it. “It’s okay, little one. Doctor Cole is very nice. We’ll get you looked at and you’ll be taken care of forever.”

Kit Morgan, her best friend, punched her in the arm. “You need to be taken care of. As in admitted. I love animals as much as the next person, but this isn’t what I signed on for.”

Kat flashed a bright smile at her raven-haired friend. “You can always move out.”

Kit threw up her hands in exasperation, and Kat held the kitten in front of her face.

Kit heaved a sigh of resignation. “He is cute. What’s one more? What are you going to name him?”

“That’s the spirit, and I was thinking—Sweetie, because he’s so sweet.” Kat bent down and secured the dapple gray kitten in the pet carrier. “I promise this is the last one.”

“You promised that about the first cat you brought home.” As if on cue, Painter—a spotted calico—rubbed up against her leg.

Kit scooped him up, propping him up on her shoulder.

Kit petted Painter on the head. “And apparently, you needed a third.”

“Person,” Kit iterated. “A third person. As in ménage, not menagerie.” Painter jumped from her arms, only to be replaced by Tabitha—aptly named due to her being a tabby cat. “I swear if you bring home a puppy…” Kit grumbled before she spoke in soft tones to the cat.

“They all needed love,” Kat stated as she stepped over to the bed. “How can you deny that?”

Kit held up a finger. “First—I think about sex all the time, and there’s nothing wrong with that. Second—you should think about it more often and act on it, rather than rescue every stray that makes sad eyes at you. Talk to the vet, ask him out, and if he says no, then you can move on and stop making excuses to see him. Third—it’s not just my fantasy. You wanted to have a threesome with people you love and trust. You trust me. But you have to find someone else you trust too, if it’s ever going to happen.”

Kat crossed her arms over her chest. “Maybe I’m content with my fantasies.”

“Oh brother,” Kit mumbled. “Fantasies are all well and good, but having the courage to take action shows real love for yourself.”

Kat glared at her friend even though a nugget of truth hit her in the heart. Timid of men in general, Kat hadn’t had a lot of sexual experiences. In fact, she’d been scared of exploring her sexuality until she’d met Kit at a fundraiser for the animal shelter where Kat worked. They had literally bumped into each other, and from the moment their gazes connected, words flowed, and they hadn’t stopped talking since.

Bisexual, Kit had shared experiences with both men and women, and she also worked as a sex therapist along with being a professional Domme. While she chose her personal partners carefully, her openness about sex and any sex-related topic had helped Kat come out of her shell and speak up more about what she wanted to explore.

Kit’s friendship had been good for Kat. Bisexual as well, Kat had felt safe enough with Kit to explore a more sensual side of herself with her best friend. Kit had taught Kat how to use toys to share pleasure together. At first, it had confused Kat—loving a woman as deeply as she did, plus sharing pleasure, but also wanting a relationship with a man. It had taken her some time to realize that love knew no bounds and that she and Kit shared a love that didn’t fit into any mold society could dream up. She also cherished that Kit encouraged her to explore the part of her that adored cock.

People often took them for a couple even when their intent had been to seek out male companions. Kat didn’t care, but Kit did, and it had been the only bone of contention between them on occasion.

Kat had given up on dating men, even though she often went to bed dreaming of an olive-skinned man with dark eyes and hair. She wondered what it would be like to see his handsome smile right before he kissed her. Or better yet—fucked her senseless.

Kat startled at the punch on her arm. “Ow! Hey.”

Kit kissed her cheek. “Well, go get him, tiger.”

Kat frowned, then bent to grab the handle on the pet carrier and stood. “You know it’s not easy for me.”

Kit’s expression softened. “I know, hon, but you can’t bring home any more animals as an excuse to see the man. You have to ask him out. Or, at the very least, talk to him and see if he’s interested.” She held up three fingers. “Three’s the limit.”

Kat stuck out her tongue at her. “This was my townhouse first.” 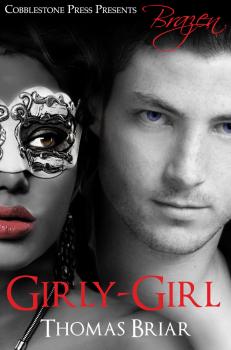 To the Moon and Back (MFMM)
Becca Van
In Shelf
$5.50
Tweets by
sirenbookstrand