Angry over a breakup with her longtime submissive, Kathy goes looking for trouble. She wants to forget her pain by inflicting some. Anyone will do.

Theo has moved back to town where he can oversee the local office of his architectural company and be closer to his aging parents. He’s tending a broken heart and wants out of his life of bondage and dominance. 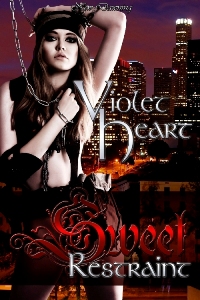 Theo immediately went on guard. Did someone have a gun? His heart went to double time on a burst of adrenaline. He dropped into low shadows. Ready to use self-defense to disarm a lunatic, he ran in a crouch to a dark spot at the end of the bar's counter. He peeked around the corner and froze.

A gorgeous woman snarled at Frank. She took a threatening stomp in platform boots he wanted wrapped around his back in the worst way. Black leather pants hugged her curves, highlighting long, lean legs and a high, firm ass he itched to smack. Her tiny, bare waist showcased creamy white skin. An elaborate tattoo created a swirl design in shades of purple and red around her bellybutton. His cock came to life.

Her not-too-large breasts heaved on heavy breaths. A leather halter with spaghetti straps put them on display, showing off perfectly rounded cleavage and a hint at hardened nipples. Bare shoulders, smooth and well toned, gleamed in recessed lighting above the bar.

Anger ignited alongside his desire. He didn't want this.

She turned, snatching a shot glass off the bar. She drank its contents in a single swallow then hiked a glossy, shapely lip as it burned. Daggers shot from large, bright green eyes. She wrinkled an adorable pixie nose. He growled inwardly. She's trouble – clearly in more ways than one.

Then she swung to face Frank. Her high, shiny black ponytail formed a single, sexy ringlet, and whipped. Slender fingers held the shot glass ready to throw at the bouncer. Theo liked that she didn't wear her nails long. She didn't wear any jewelry, either. Stop it. Figure out a way to tackle her. The idea had him hard.

"Now, hold on a minute, Kathy." Frank planted his feet wide. "I know you're hurting, but do you really wanna do this? I'll have to kick you out and revoke your membership."

"You wouldn't dare." She narrowed her eyes. She reached behind and slapped the bar. "Give me another one."

"I own this place, not you," said the bartender. The sound of a glass thumped onto the counter. "Besides, you know her. If I don't, she'll hunt me down and take revenge."

"That's right," snapped Kathy. "And don't you #%!&' forget it." She giggled as if she'd told a joke then took the drink and downed it. Her body arched as she threw back her head.

Theo groaned quietly. He forced his gaze off her. Damn, she's beautiful. I don't need this. I don't want this right now.

He wanted to punish this stunning spitfire. Fifteen minutes of slamming into her. No foreplay. No talking. Then he'd walk away and not look at her again.

Her eyebrows closed in on a scowl. She jerked her arm out of his hand. "Fine."

Huh? She agreed? A flutter of anticipation flipped his stomach, but he staunched it. This wouldn't be a good time. It was a purging. Nothing more.

He pulled a condom out of his pocket at the same time she took one from the waistline of her pants. She gave his an incredulous look. Then her features softened and she released a breathy laugh. Her eyes sparkled in her brief mirth. Her sheer loveliness in that moment struck him like a smack in the face.

He shoved his packet into his pocket. He'd only brought it in case someone else needed one, anyway. She tossed hers on the bed then sent him an expectant look.

"This isn't lovemaking," he bit out, irritated that he wanted to undress her. "It's dirty, heated release. A diversion."

Her features darkened. Her eyes hardened. "That's my favorite kind."

"Good." Theo opened his pants and freed his aching hard-on. "Because you've been badly behaved and need to be punished."

She sneered, unzipping her own pants. "That's right." She eyed his cock and licked her shapely lips. "Punishment's in order. But know this, nameless stranger. I'll be punishing you right back." Need rocked him. He grabbed the front of her halter-top, his fingers entering her generous cleavage. Her breasts felt as smooth and firm as they appeared. He yanked. Luckily, the sturdy leather held. Her ponytail swung past his cheek, smelling of cherry blossom, which caused him to hesitate. What a strange coincidence she wore his favorite scent.

"Be quiet," he said in a soft voice that belied the violent hunger ravaging his conscience.

Green fire flared in her eyes. "You—"

Her eyes narrowed. "You're welcome to try, asshole." She pushed on his shoulders.

Undeterred, he clutched her halter close and slipped a hand into her panties. He inserted a finger into her hot pussy and found her wet and swollen. You want me as much as I want you.

She stopped pushing. Her lids drooped, and her legs opened for his invasion.

He withdrew his hand. "Take off your pants."

"Can't you be a little nicer about it?" She took a step back. One corner of her sensual mouth pulled in irritation.

"There's no point." He let go of her halter.

Sighing, she sat on the bed and removed her boots. Then she stood. A defiant smirk lit her face.

She pushed her pants to her feet, panties and all.

He admired her neat, manicured thatch of black curls while he lowered his own pants to mid-thigh. "You need this." Hell, I need this. He took her by the waist and tossed her on the sheet-covered bed.

She bounced once, her long legs spreading and giving him full view of her magnificent pink, glistening vitals. Her vagina gaped invitingly, shiny with juices.

So hard it hurt, his boner jumped. She closed bent knees. Her gaze devoured his schlong. This is torture. Leaning, he took the condom and tore the foil using his teeth. He closed his eyes. I can smell her excitement.

He rolled the protection on and studied her a second. Insecurity flashed briefly when her gaze met his.

"No," he stated. He hooked his fingers behind her knees and pulled until her hips rested at the edge of the mattress. White sheet bunched and wrinkled. He didn't care. His cock needed to be inside her. Now.

Awakening of a Submissive (MFMM)
Kalissa Alexander
In Shelf
$5.99
Tweets by
sirenbookstrand