The Breath of Life (MM)

Alex Robinson expects nothing more from his holiday than skiing and snowboarding. But when an error leads to a double-booking, he and his friend, Jackson, end up in a different hotel. One they’d normally never be able to afford.

There he meets a group of steampunk cosplayers, including the beautiful and enigmatic Hel, and the downright gorgeous Rupert.

Drawn to Rupert, Alex finds himself spending more time in the company of the group and his relationship with Rupert deepens.

But the cosplayers are more than they seem and when Rupert’s secret is revealed Alex must face a challenge for the man he loves. 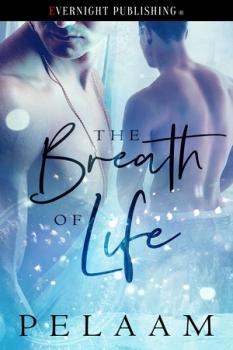 The Breath of Life (MM)

For a second, Alex could have sworn he saw an amber glow in Rupert’s eyes. But even as Alex thought it was there, the glow was gone, and he blinked. Must have been a reflection from the copper casings on the lamps.

But as he looked at the other man, Alex was certain he could feel the heat in Rupert’s gaze, and a deep primal hunger blazed into life. His cock swelled in response, and a slow smile curved Rupert’s lips, as if he was aware of Alex’s reaction. Not wanting to embarrass himself, Alex waited a minute for the surge of lust to subside before getting to his feet.

“Well, it’s been a memorable evening. But since I do have to be up early, I’d best retire to bed.”

“I’ll walk with you.” Rupert rose from his seat and bowed to Hel. “I’ll see you in the morning. Goodnight, everyone.”

“Um, sure. Goodnight.” Rupert’s offer sent a thrill through Alex. He could hardly refuse with everyone looking at them. Alex could only hope that his wayward cock behaved itself when he was alone with Rupert.

“Hel told me where your room was. But perhaps you might like to stop off at mine on the way? Have a nightcap with me?”

“I’d like that.” Alex was crossing boundaries he’d never expected but having a nightcap might mean nothing more than that. A small part of Alex hoped it would just be nothing more than a drink before bed, but the greater part hoped the bed would be Rupert’s.