Nell Jones has taken a position working for the mysterious Captain Darlington at Chesworth Manor. She needs the money and it seems to be a remarkably easy job—for one hour a day, to just stand naked in a room with no windows. How hard can it be?

Well, the nakedness is a bit odd, perhaps, but not nearly as odd as those sounds coming from behind the wall.

Is it the reclusive master of the house who watches her?

No one has laid eyes on the Captain since he came home from war in the trenches three years ago. He dismissed most of his household staff and never goes outside into daylight. So what could he want with a poor girl like her?

Rumor has it that he was badly scarred at the battle of Passchendaele and now he can't stand the sight of his own face. But if it is him behind that wall, Nell decides she'll lure him out into the light.

He gets to watch her—every part of her—so why shouldn't she get to see him in return?

Chesworth Manor was the largest house Nell had ever been inside. It seemed to her as if they walked along miles of corridors and up countless steps until they arrived in a wood paneled room that must have been at the very top of the building. It was oddly shaped and had a beamed roof that came to a point high above. They must be inside the turret that one could see from the lawns, she realized. It had caught her eye that morning as she crossed the grass on her way to the servants' entrance. She remembered thinking it such a shame that the windows in the turret were shuttered, because there must be a splendid view from that high place.

The room was bare— not a stick of furniture. It was also dark, of course, with no light allowed in from the windows. This explained the housekeeper's lantern.

"You will have no need to do anything but stay inside this room. You may walk around it, if you wish, but do not open any of the shutters. This light should be sufficient, but keep it at your side at all times so you can be seen in full."

"By whom! And don't ask questions, girl. Do not speak at all once you are alone in this room. Not a word. I guarantee you this will be the easiest money you ever earned and you ought to be grateful to the Captain."

Nell licked her lips and nodded.

"Now, get your clothes off and give them to me."

"That's right," the woman replied briskly, setting the lantern on the floor at their feet. "Off they come."

"He wants to see you bared, girl. Don't fuss. He's not in the room with you. He's not going to touch you. He only wants to look."

Instinctively her hands had crossed her breasts as if "he" could already see them. "I'm not staying," she muttered. "I won't do it."

The housekeeper exhaled a gusty sigh. "Very well then, girl. Let someone else do it and take the money. You must not need it so much after all, despite the sad tale I was told about your situation. Out you go. Run off back home."

Nell's stomach rumbled pitifully. It was beginning to hurt too, pinching in on itself, so desperately in need of food. She thought then of the clothes they all required, the diminishing coal supply, medicines that could be needed any day if one of them fell ill. The burden of this heavy responsibility was almost overwhelming and, as she'd told the housekeeper, she'd had to leave her post as a kitchen maid at the hotel in Warwick. Now that her mother was gone Nell had to spend most of her time looking after the cottage and the little ones. Ruby, who was fourteen, could manage the babies for an hour or two, but she was too much of a daydreamer to be trusted longer than that. Fortunately they had a kind neighbor who could look in on them too, but Nell didn't like other folk knowing their business so she liked to manage as best she could without asking her for too much help.

"It's only a short time," the housekeeper added, as if reading her mind. "An hour to stand here without your clothes. It's not hard labor, is it? It's not the workhouse, is it? It's not a brothel down at the docks, is it? Or a filthy gutter where you're fighting off stray dogs for an apple core."

The woman, of course, was inferring that she would end up in one of those places soon, if she didn't find another way to make money.

"One hour of your time, to make a man happy enough that he'll pay you more money than you deserve. That's all."

Nell looked around at the walls of the room. The only decoration was a framed painting of a stag emerging from a misty forest. It was a fine, big animal with muscular haunches and a proud neck. But there was something sinister about the scene. Something menacing. It made the little hairs on the back of her neck stand to attention. Every pore of her skin came alive, ready to take flight.

"How is he going to see me if he's not in the room?" she demanded, her voice quaking slightly despite that determination to be bold.

"That is not for you to concern yourself about. You'll just stand in here until I come to get you again. Not a word should pass your lips. Like I said, the easiest money you'll ever earn, girl. If you can hold your tongue."

Well, if he couldn't touch her, she supposed it might not be so bad.

She'd try. If she felt uneasy, she'd leave the room. It was only for an hour.

"You won't lock me in?" she asked. "I don't like being locked in. It makes my heart beat too fast."

The housekeeper rolled her eyes. "I won't lock the door, but I will take your clothes with me."

Nell wasn't afraid to run out of there stark naked if she had to get away. It shouldn't be hard to find something in one of these many rooms to cover herself decently before she left the house, if they refused to let her have her clothes back.

In any case, it was better than sweating as a kitchen maid below stairs.

Finally she began to undress. 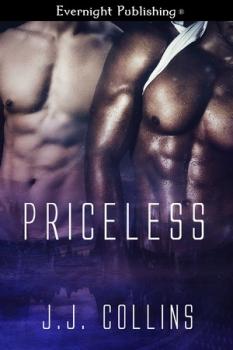 Mate Me, Keep Me (MM)
Angelique Voisen
In Shelf
$2.99
Tweets by
sirenbookstrand