Thaddeus sold his soul to save his family long ago, but the deal he struck with the demon Belial has him spending eternity managing Le Carnaval du Diable, filled to the brim with others damned into servitude. Belial wants more than Thaddeus' soul, though, and his constant advances only add to Thaddeus' stress as he faces a threat to the carnival and all those within. 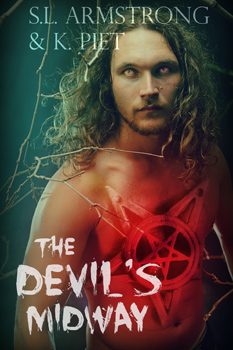 In the stifling heat of the massive tent, a hundred men and women gathered around a man and a woman. The man wore nothing but a loincloth that sparkled in reds, oranges, and yellows. It hid what it had to hide, and Thaddeus was pleased. The pyrovores preferred going naked, but in the deep south, naked wasn't something that was tolerated. The woman—Sera—wasn't any happier than her companion, though she wore a sparkling tank top and an almost-there skirt in the same colors as Conláed. Brother and sister. Fraternal twins, born of a dragon mother and a human father. As they performed their fire tricks, letting loose huge breaths of bright flames, the audience hummed and awed. It was impressive, but Thaddeus knew better. Sera and Conláed were just prisoners, like all the other performers in Le Carnaval du Diable.

Thaddeus turned away from the spectacle and pushed out of the Ten-In-One tent. It wasn't much cooler outside. October in Georgia was hellishly humid for his tastes. He much preferred spring and summer in the north circuit than the fall and winter one down south. He raked his hand through his hair, wrinkling his nose in disgust at the sweat. He'd bathed three days ago, and he'd need to bathe again tonight. He smelled. Thaddeus hated smelling because, around here, you smelled like fear and brimstone and smoke.

He stepped up into his trailer, shedding his boots and shirt almost instantly. Christ, the fabric even made a sopping slap as he dropped it to the floor. Thaddeus yanked on the button of his trousers as he made his way into the back of his trailer where a tin tub—small but useable—waited. He had his trousers down around his ankles when the scent of sulfur and ash almost bowled him over. Looking over his shoulder, he groaned. "You."

"I had to drop by. You made it to Macon a week early."

Thaddeus ignored the yellow-eyed gaze on his ass as he bent over to yank his trousers off his feet. "We didn't stop in Milledgeville. No reason to. More marks here than there, anyway." He didn't hear anything, but by the time he stood up, there was a hand around his throat, shoving him into the wall of his trailer. His hands immediately flew up to pry at the vise squeezing at him, his vision full of pale skin, handsome features, and smoldering amber eyes.

"It isn't your place to decide if the carnaval skips a stop or not, Thaddeus."

"Belial," Thaddeus rasped out, clawing at the hand around his throat. "Let me go!"

"All right!" The world was going dim at the periphery of his vision, and Thaddeus thought he would finally die. He was looking forward to that moment, but then Belial stepped back, released him, and Thaddeus fell to the wooden floor in a coughing heap.

"Now, you sent word that we needed to speak?" Belial smiled down at him. "Does this mean you're finally ready to go to your hands and knees for me?"

Thaddeus laughed, though it came out more like a croak. "I've told you, I bargained away my soul, not my body."

"Yes, yes." Belial sat on the only chair in the sparse room. "And I keep telling you, it's only a matter of time."

Thaddeus looked up and instantly wished he hadn't. On the floor, his view of Belial was more than a bit suggestive. He tore his eyes away from the way Belial sat with his knees casually parted. Damn Belial; he probably sat that way on purpose, just to get a rise out of him. Well, he wasn't going to get it. Thaddeus looked back down to the ground as though he needed to in order to catch his footing and straighten again. Being on his feet put him taller than a seated Belial, and he much preferred the illusion of dominance. "Time is not without end. Not when it comes to me and you."

Belial raised an eyebrow at him in one of those amused expressions Thaddeus had grown to despise over the long years. "You've barely served a fraction of your time. I assure you, I have all the time I need."

There was no winning this argument. He'd had it more times with Belial than he cared to count. He waved off the statement, affecting an air of nonchalance despite being nude. "I sent word because of the incident I brought to your attention the last time we spoke."

The wicked grin that curved Belial's lips made Thaddeus want to groan and rephrase his sentence as he made his way to the tin tub, grateful that it was already full of cool water. "We spoke of a good many things. Do you refer to your complaint about the new sword-eater getting fresh with you?" Thaddeus opened his mouth to protest, but didn't get a word out before Belial continued, "Because I thought you would rather appreciate a skill such as hers. Take a lesson, perhaps."

Thaddeus glared at Belial as he hunched down into the tub. The cool water did nothing to soothe his anger, even if it felt amazing on his overworked feet. The truth was, he hadn't complained. He hadn't breathed a damn word about Maram to Belial, not directly at least. Belial's power had simply drawn out the memories in his moment of weakness. Only a moment during their last little talk; that's all Belial had needed in order to pry into his dealings with the more recent additions to the carnaval. He inwardly reminded himself to keep up his guard, to maintain that inward barrier as he answered flatly, "No. Leander is following us. The man is obsessed with Roderick."

"You do." So calm, so collected. Belial's tone made Thaddeus suspicious. His eyes narrowed, never leaving Belial's form as he used a sponge to wet his body. "And you plan to do what about it, exactly?"