Mine at Midnight (MM)

Mine at Midnight (MM)

“Marcus,” he called out before doubt had any chance to strangle him. Marcus slowed down and turned, his shaded eyes hiding the core of his expression, which appeared damn stoic and unfazed. Trevor stepped up to him, hands fisted by his sides to hold back the fiery burn to kiss the man and beg for forgiveness.

Marcus lifted his sunglasses to the top of his head and stared at him through dark blue eyes. Trevor swallowed down the memories of those eyes, how they darkened to navy when emotions claimed his lover or how they lightened, if only a little, with playfulness. He spent hours loving to look into Marcus’s eyes, his soul, the inspiration for his art in so many paintings.

“Back there. I wasn’t expecting to see you and, well, it kinda caught me off guard,” Trevor sputtered. He bit his lower lip and squeezed his eyes shut for a spilt second. No, idiot. “What I mean is, I didn’t come here to vacation. I’m here because I was hoping to find you here too.”

“You struck deep, didn’t you?” Marcus asked, making a slight motion to his own neck. Trevor shifted, ignoring the tightness the collar produced with each bolus of anxiety.

“I didn’t know where to start, but I remembered how things used to be and figured I’d give it a try.”

Damn, his face was burning under the piercing scrutiny of his former lover. His closeness, however left his cock throbbing against the zipper of his jeans, craving to indulge in what they once shared.

“How did you know to come here? It’s not a road trip away,” Marcus pressed, taking a single step closer to Trevor. A good four or five feet still hung between them, but the short gap that Marcus struck away was enough to surround Trevor with the dominating thrum of Marcus’s presence.

Trevor licked his lips, warmth creeping up his neck. “I nosed around a little. A friend of a friend.”

“And how did this ‘friend of a friend’ know of my business on Sinn? Identities are meant to be kept secret here.”

Trevor snorted and rolled his eye to the vibrant green canopy of fronds and the denser casuarinas overhead. “You haven’t been the most inconspicuous as of late. You’ve been a pretty hard partier, hitting headlines in tabloids and such. It wasn’t that difficult to track you down once I knew for certain where to look.”

“And your hunt led you to a private island in the Caribbean that hosts risqué and taboo parties for the wealthy and provides a private sanctuary for those of high society to let loose their desires and indulge.” Another step. The air turned dense and hard to breathe. Trevor refused to step back, even though the sharp edges of Marcus’s personality glimmered in the outer rings of his irises. “What are your desires, Trevor?” He flicked the tag on the collar, his lips curling back. “Did you find it last night?”

Trevor stared at him for a long moment, trying to breathe. Marcus’s voice dipped low, liquid gravel creeping down his spine. That tone, sexually charged and alive…He recognized it.

Trevor blinked, thankful for the sunglasses still covering his eyes. Marcus was his Master. This man standing before him, the man who owned him heart and soul off this island, owned him for the next two nights on Sinn.

He bit back the urge to divulge Marcus in this knowledge. If he did, he’d break two bold-and-underlined rules of Breakers—anonymity and privacy.

Maybe I’m wishing for too much. Maybe he isn’t my Master.

“It depends on the aspect you ask,” Trevor finally said, his voice thick with his mounting arousal.

One last step. They stood toe-to-toe, the narrow space between them pulsing with unspent energy. In five years of separation, one thing never died. The raw desire and carefully restrained urgency still hummed as loud and clear as it had during their year-long relationship.

“You, Trevor, are claimed by a Dom. You know what that means, right?” Marcus asked, raising his brows. Trevor nodded once, noting the challenge that lay beneath the man’s expression.

“I belong to another while on the island.”

“Very good. So you standing here with me can cause a major dilemma if your Dom catches you.”

“What if my Dom is you?” Trevor couldn’t stop himself before the words spilled out of his mouth. He wanted to know if Marcus was his Master, and if he could give himself over completely once night fell.

Marcus’s eyes darkened, and a dangerous curl came to the corners of his mouth.

God, I want to kiss you. I want to taste your mouth again.

“Then your Dom has found you and knows you breached agreement.”

“Take everything off, pet.”

Trevor nodded, lightheaded. He tugged the leather pants off Marcus’s narrow hips and was gifted with the thick, pulsing length of his cock so close to his face. He paused, staring at the slick, wet head of his mushroomed tip. One quick taste.

Marcus’s fingers combed into his hair and fisted close to his scalp, tipping his face to look up at him. “Undress me and I’ll decide whether you get my cock or not.”

“Yes, Master,” he whispered, working the leather down Marcus’s legs while remaining in his vulnerable hold. He unlaced Marcus’s boots and tugged each one off, followed by his socks, and at last, his pants. Not once did the man sway or stumble, holding his balance with enviable posture.

Marcus stepped back, releasing his hold on Trevor’s hair. He stood with his feet spread, his eyes intense and observant, and the tails of his flogger lightly slapping his palm. Trevor lowered his gaze to Marcus’s beckoning cock. His velvety flesh was taut over the ridges and veins of his swollen shaft. He was a large man. Trevor suppressed the shiver that touched his nerves as he recalled Marcus fucking him, filling him so much that the any small movement could threaten to make him come.

“Would you like to start with sucking my dick, pet?”

Trevor shuffled closer on his knees. “Yes. Oh please, Master. May I?”

Marcus fisted the base of his cock and tipped his crown at Trevor’s lips. The room spun, Trevor’s elation sinking him deep into a dream. “Suck, pet. Swallow me down, but keep your hands to yourself.”

Trevor dug his fingers into his thighs, keeping from touching the masterpiece of a man before him. He flicked out his tongue to take his first taste of Marcus in years, and moaned aloud. Closing his eyes, he sucked the hot shaft to the back of his throat, playing his tongue along Marcus’s length. The salty-sweet delicacy of his lover infiltrated every cell in his body, stirring the itch in his belly to a whirlpool of fierce want. His cock throbbed and downright fucking hurt.

His nails bit into his legs, the battle not to touch and feel Marcus driving him crazy. He sucked hard, remembering how Marcus liked his cock treated with a firm mouth and tight ass, and received a low rumbling sound in response.

Trevor pumped his mouth up and down his cock, keeping his lips tightly wrapped around the hot, satin-like flesh. He drank each seed of pre-cum, savoring the delicious flavor.

“Yes. Hell yes. Do you want me to come in your mouth?”

Trevor nodded with a muffled “Mmm-hmm.”

Marcus rocked his cock into Trevor’s mouth, meeting each wet glide down his penis so his tip lodged as deep as Trevor could take him.

I want more. I want all of you, Marc. Everything.

Marcus slowed his thrusts, but Trevor kicked up to a frenzied pace, sucking, licking, and moaning, waiting for that single telltale wave along Marcus’s wide dick.

“God, pet. Keep sucking me.” Marcus growled low and deep, the rumbling resonating through Trevor’s muscle down to his bones. He swallowed each dose of semen, reveling in the potent taste of his lover. “Fuck, Trev. Fuck!”

Trevor was shaking as Marcus’s cock softened, the last of his climax seeping over his tongue. Marcus stepped back, pulling his dick from Trevor’s mouth. Trevor pitched forward on his fists, trying to catch his breath as he willed the powerful swell of his own unbearable arousal down to a manageable level.

Nothing is ever manageable when it comes to you.

His hair dusted over his forehead, strands sticking to the thin sheen of sweat that had developed. He flicked his tongue along the corners of his mouth, capturing a remnant of Marcus’s seed and savoring the tiny stolen delight.

“Nicely done.” Marcus’s thick voice reminded him that he was far from through. God, how much more would he have to endure before Marcus gave him his reward? How much more could he endure?

“Master, what else can I do to please you?” Trevor asked, his voice as shaky as his body.

“Back on the bed. I’m not through punishing you.” 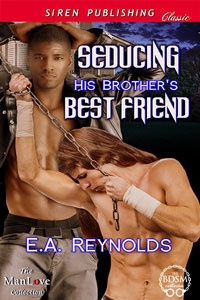 To the Rescue (MM)
Jo Penn
In Shelf
$3.99
Tweets by
sirenbookstrand