The Governess by Izzy French

No governess lasts very long in Monsieur Leveque’s house, and none of them will talk about what happens to them there. Angelique expects to be dismissed as easily as the rest. Instead, her employer is determined to punish her for letting his sons talk at mealtimes, and as his crop falls, the relationship between them takes on a whole new complexion...

Sheila and her friends are enjoying a very naughty sleep-over, while her brother is secretly spying on their lesbian games. But one of the girls, Mary, has rumbled his voyeuristic antics, and decides a spanking with her ruler is in order to make sure he doesn’t try the same trick in future. How will Mary react when he decides turnabout is fair play?

The Rose by Beth Anderson

They’ve been sharing intimate fantasies on line, but now it’s time to take their relationship into the real world. Attending his home for her first ‘training session’ and accepting a rose as the symbol of her submission, she finally learns what it’s like to be on the end of a masterfully delivered punishment.

No Smoking by Stephen Albrow

Taking a much-needed cigarette break is one of the few things that makes Carly’s job at the call centre bearable. But the company has a new rule forbidding smoking in the car park, and a handsome, dominant security guard is keen to show Carly just what happens to bad girls who break that rule.

The Worm Turns by Beverly Langland

Years after she was bullied at school by Julia, the girl she feared and loved, they meet again by chance in a lesbian bar. At last, she has the chance to take revenge. But having Julia naked and helpless over her knee, ready to be spanked, arouses feelings in her she never expected. Will she finally be able to turn the tables on her gorgeous tormentor?

Once More With Feeling
Miranda Forbes
In Shelf
$4.59

A Caning For The Goddess
Miranda Forbes
In Shelf
$2.99 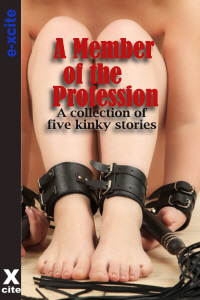 A Member of the Profession
Miranda Forbes
In Shelf
$4.59

A Caning For The Goddess
Miranda Forbes
In Shelf
$2.99