Cinderelle is a cross-dresser. Prince Charming has a shoe fetish. And the fairy godmother can twist your wish into a nightmare.

It’s time to take off his stuffed bra and put on a sword, because everyone is hunting poor Cinderelle.

Henry chuckled, deep and rich. He lifted my leg and placed the heel on my foot then did the same to the other. “Walk to the bed, Cin. I want to see your dick bounce and those heels shine in the sunlight.”

I shivered before I stood. Naked but for the heels, I took my time walking across the room. Each step was deliberate and slow. When I got to the bed I turned around and saw Henry stood before the dying fire stroking his shaft.

I’d never been called that before. It made me blush.

“Bend over the bed.”

I turned around and stuck my ass in the air. The blankets were soft to the touch as I laid my forearms upon it. “Like this?”

I only knew because of the creak in the floor. Then he was behind me. His hands on my ass, spreading me.

“There is just so much I want to do to you.” He growled as he slid a finger over my back hole. “So many positions. So many ways I want to hear you come.” He caressed my balls before moving to the small stand beside the bed. He pulled out a vial of clear liquid and another heeled shoe. This once was a beige shoe with golden trim and, was that a golden heel? It shone in the sunlight streaming through the windows. Henry walked back toward me. His cock hard as stone and bouncing with each step.

Anticipation of that gorgeous length inside me made a shiver run down my spine.

Henry was behind me.

“You’re so tight.” Henry remarked as his finger slid out and in again.

“Been a while.” Too long. I groaned. He kept going in and out, so slowly that my toes curled in the heels I wore. “Henry.”

He pierced me with two fingers and dragged the golden heel along my balls.

I shivered and flinched and moaned. My whole body was on the edge of imploding and he teased me!

Henry eased his fingers out. The heel traveled along the back of my thighs, across my balls and the cool tip waited patiently at my entrance. “Open for your prince.” He slid the tip inside.

The combination of my warm body, the liquid and the cool heel was a wave of sensations. I reached down and grabbed my shaft, stroking wildly as Henry slid the golden heel deeper into my ass. The sole of the shoe pressed against my balls and I knew he had pushed it completely inside my hole. “Henry.” I whispered and tugged on my cock harder.

“Beautiful.” He stepped back.

I glanced over my shoulder to see him stroking his dick as he stared at his work. Glass shoes on my feet, my ass in the air pierced by the golden heel. “Henry. Please.” I rubbed myself faster, but I wanted, no, I needed that full feeling that only girth and length could provide.

Henry chuckled darkly before moving behind me. “Keep stroking your cock.”

I did as he said, base to tip, in terrible need and pressure. Henry caressed my balls, cupping them, squeezing them gently. Then he began to fuck me with that golden heel. It was slow torture. Pleasure kept building and building until I thought I would burst at the seams. 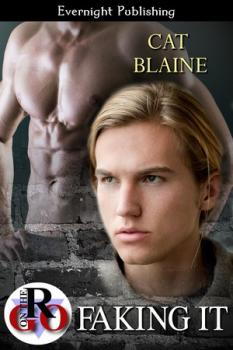 Forget Me Not (MMM)
Casper Graham
In Shelf
$3.99
Tweets by
sirenbookstrand