Jamie comes to Neverland to seek out the attention of the owner Aaron Nevers. He’s inexperienced but very interested in everything that Aaron has to offer. Aaron, on the other hand, doesn’t make a habit of taking novices to bed but Jamie is beautiful and tempting. They make a connection neither were prepared for.

More From Tales from Neverland

Aaron Nevers looked up from the stack of invoices he’d made earlier in the day. “Jack.”

Jack Withers leaned against the frame of the door leading into the office, allowing the thud of music from below to filter into the room. “The boy is back.”

Aaron raised an eyebrow. “Is he, now?”

Jack shifted into the room and offered his boss and friend a folded piece of paper. “Mark’s on the door. He wrote down the kid’s information and passed it up. He’s pretty confident the identification the kid is using is his and not fake. This is the last visit on his guest pass.”

Aaron nodded and unfolded the note. James Andrew Knorr. 26. The younger man had been in the club three times in the last six months. He’d introduced himself as Jamie and had yet to allow a single Dom in the place to have him. Men and women alike were dismissed without much discussion. Aaron stood and left his office. The small balcony attached to the elevated office space offered him an unfettered view of his domain.

Jamie was seated at the bar, a bottle of water sitting untouched in front of him. He wasn’t the sort that normally found their way into the bowels of Neverland. People didn’t come to a fetish club to relax after a long day. They came to fuck, to be fucked, to be tied up and used to everyone’s mutual satisfaction. The boy stood out in his dark jeans and t-shirt. He was very attractive, appeared very young, built like a wet dream and obviously curious about the nature of the club. His gaze drifted over the room, taking in the leather-clad crowd and the various sex acts that took place around him with interest.

Aaron hadn’t made a habit of denying himself a damn thing since his honorable departure from the Navy, so he’d taken the money he’d been given from his great-uncle’s estate and created a place where he and others like him could play. Calling it Neverland was a sharp little dig at his father who’d stopped being proud of his son the day Aaron had come out to him. Neverland was a private club, but the kid had a guest pass—one he’d obviously gotten from a current, trusted member. Aaron rarely handed them out and each only allowed four visits to the club. If he wanted in again after tonight, he’d have to apply for membership. Since he hadn’t played with anyone so far, Aaron didn’t think he’d have a sponsor for his application, which was a pity—the boy was lovely.

Jamie looked up and met his gaze across the crowd of bodies packed on the dance floor and Aaron inclined his head. The boy lowered his gaze briefly and blushed. It was the most charming thing he’d seen in years. The boy looked up again and wet his bottom lip, clearly pleased by the attention. Aaron was half-hard just looking at him.

His preoccupation with their infrequent guest was no secret to anyone on his staff so he wasn’t surprised when Jack leaned in close and asked, “Want me to invite him up to meet you?”

He didn’t play with newbies; it was his first rule. The only thing worse than fucking a virgin was dominating someone who’d never submitted before. The emotional ramifications of sexual submission often led to inappropriate attachments even in the experienced. But all rational and reasonable arguments aside, he wanted Jamie. The burn of want had settled low in his spine months ago and had simmered there no matter who he tried to slake his lust in instead.

Aaron watched in silence as a Dom approached the boy only to be rejected. Jamie’s gaze reconnected with his as soon as the intruder departed, his expression intent and thoughtful. The younger man had an open, expressive face and the kind of mouth people paid plastic surgeons thousands to get. Aaron exhaled and jerked his head toward the stairs that led up to his private space. He grabbed his bottle, slid off the barstool, and started across the club toward the stairs. It worked in Jamie’s favor that he didn’t play coy.

Aaron shrewdly watched his progression through the crowd; most of the regular players had watched the byplay between him and the boy so his path to the stairs wasn’t difficult. The security guard at the bottom of the stairs unhooked the rope that marked off the area and let Jamie pass without a word. “You can handle the floor, I trust.”

Jack smirked. “I’ve had your back for ten years, man. I got this.”

He went back into his office and opened the door that led up to the third level of the club and his personal apartment. Without looking back, Aaron went up the stairs and paused just briefly when the door shut behind him. He pulled out a bottle of water, relieved to be out of the warmer club area, and sat down on the leather loveseat near the fireplace. He dropped a pillow on the floor at his feet and focused on Jamie. The submissive had stopped just a few feet away from the stairs awaiting orders. His posture was relaxed and stripped of artifice.

Aaron crossed his legs at the knee and rested back on the small sofa. “You wish to submit to me?”

“And where did you hear my name?”

“We were stationed on the USS Abraham Lincoln together, Sir.”

Aaron raised an eyebrow in acknowledgement. He wasn’t surprised that he didn’t remember Jamie. The ship normally had a crew of over five thousand sailors and he’d served on it for four years. “Are you active duty?”

“No, Sir. Discharged seven months ago,” Jamie said, his jaw firming up.

“You appear to be in good physical condition,” Aaron said coolly. “No longer willing to serve your country, sailor?”

“Sir.” Jamie exhaled sharply. “My brother needed a kidney and I was his only familial match. I resigned my commission to fulfill a higher duty to my family.”

Aaron understood such duty better than most. “Strip.”

Jamie immediately unbuckled his belt, pulled it free from his jeans and dropped it on the couch he stood next to. He toed off his shoes and systematically removed the rest of his clothes, pausing to fold his jeans, t-shirt, and boxers before laying them in a neat pile beside his belt. The younger man was incredibly fit, lean muscle over a slender but strong frame. A scar trailed for three inches down from his navel, a constant reminder of the sacrifice he’d made for his brother. There were a few smaller scars, also probably from the surgery. A scar from a knife wound in his right leg. A bullet wound on his left arm. His cock was hard, curving upward toward his belly, and already wet at the tip.

“Not your everyday sailor then,” Aaron mused.

“Yes, Sir. I served my final three years with the Teams.”

Aaron nodded and spread his legs. “Come here and kneel.”

Jamie walked to stand in front of him and slid to his knees on the pillow without a word. He lowered his head and relaxed by degrees as if the position itself was powerful enough to ease some of the stress he was obviously under.

“I’m going to ask you a series of questions,” Aaron began. “You will answer them truthfully. If you find you cannot answer one of my questions, you will stand up, dress, leave and never return here. Understood?”

“Yes, Sir. I had tests done before I donated for my brother and I’ve not had a sex partner since that time.”

“I had tests done a few months ago and can thankfully say the same. Have you ever had sex with a man?”

“It was good,” Jamie murmured. “Better than I thought it would be, but it was quick and I was afraid we’d get caught. I refused to meet with him again.”

“I take it that this was before the regulations changed?”

“Yes, Sir, but even after that it would have been in violation of fraternization regulations. He was enlisted.” Jamie wet his lips nervously. “I met up with him about six months ago and he suggested that I try this place out. He figured I’d find what I needed here. He gave me the pass.”

Aaron reached out and touched Jamie’s face with calloused fingers. “And you didn’t let Will take you to bed when you met up all those months ago?”

“I was recovering from the donation, Sir.”

Aaron smirked. “I bet our mutual friend was very disappointed not to have you again. You’re just his type of ride.”

Aaron hummed under his breath. “Oh, most definitely.” He opened his water bottle and drank deeply from it before continuing. “Have you ever submitted to anyone before—man or woman?”

“A woman,” Jamie murmured. “For two weeks in Rome.”

“And did you have a good time in Rome with your Domme?”

“She was beautiful,” the submissive admitted. “Merciless and perfect, Sir. It was my honor to surrender myself to her care.”

“Have you ever been penetrated anally?”

Jamie sucked in a breath and averted his gaze. “Yes, Sir, whenever I can.”

“Do you consider yourself gay?”

“The only sex I’ve enjoyed with a woman was in Rome,” Jamie admitted. “And…”

Jamie swallowed. “She never allowed me to fuck her, Sir.”

“I see.” Aaron relaxed back on the love seat and stared at the submissive kneeling between his legs. “Do you enjoy pain?”

It was a perfectly reasonable answer to his question but it pissed him off all the same. He moved forward abruptly and caught the boy’s chin in a firm grip. Aaron forced his head up with careful, controlled pressure. “Do you get off on pain, James?”

“I don’t know,” Jamie murmured. “I’m not sure if it’s the pain or the…act of being punished.”

“So your merciless Domme only spanked you for punishment,” Aaron surmised and released his face. He filed the information away for future consideration and reclined back. “Bondage?”

Aaron casually unfastened his belt and pulled the leather free from his slacks. Jamie watched his hand in silence and moved forward slightly when Aaron unzipped his slacks.

“You ever had a dick in your mouth?” Aaron asked.

“Not a real one,” Jamie admitted with a blush. “Just hand jobs with men.”

“I’m breaking all of my rules for you, boy,” Aaron muttered. He pulled his cock from his boxers and stroked his hard flesh. 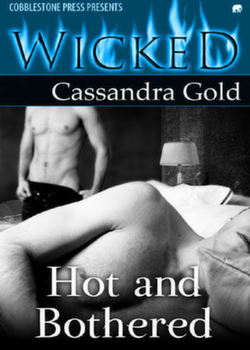