Harper Miller doesn’t want to handle what has happened to her over the past year. Her father left, her mother killed herself, and she still has to be the good girl, the one that doesn’t make waves, who is always nice. But one day, something changes.

No, it’s not something. It’s them.

Draven, Axel, Jett, and Buck. All of them are dangerous, scary, and most people avoid them at all costs. She knows they’re bad news, but Draven’s not willing to take no for an answer, not from her.

For Draven, he and his friends had this idea of finding the one girl that would complete their circle. One girl for all of them. Harper is that one girl, but first she has to go through their initiation to become one of them, to be able to bear their names, and to stand proudly.

All they ask is she remain loyal to them and them alone. No squealing to the cops. No backing down. And above all else, no running away.

All she has to do is give herself, mind, heart, and body. She can keep her soul. It’s dark anyway, just like theirs.

More From Darkness Within Duet

He locked his car and headed inside to see what was taking her so long.

She wasn’t at her locker, and as he stood out of line of sight, he watched as detention came to an end. A couple of guys headed out, and Harper was the last one to leave, apart from the teacher.

He watched her, curious as to what she was doing. What was going on in that head of hers? She looked at the time, and instead of going straight to the parking lot, she didn’t. She went into the bathroom.

His curiosity was always a problem. He followed her inside.

The jacket he’d taken from her was inside his car.

Why was he testing her, pushing her?

Being a bully hadn’t been part of his MO. He never taunted anyone. The guys who got in his way, he made sure to take care of, and the chicks always knew only his dick was on offer, nothing else. He still didn’t understand why he was sticking around with Harper. She was nothing special. They’d been going to the same school since nursery school.

When it came to her, he wanted to push her, to see how far the good girl went.

Stepping into the girl’s bathroom, he saw her at the sink.

She turned her head, and the blue fire in her eyes should have struck him dead and cold.

He leaned against the wall, folding his hands over his chest. “I’m curious how detention was.”

“Wow, really? Have you ever been to detention?”

“I bet you got a slip though, right? The teachers don’t give a shit what you do. You’ve got the right last name. The kind of name that even teachers don’t like to touch.”

He smirked. “You jealous of my last name, Miller?”

“So I’m the target this year for your amusement, is that it?”

“You clench your hands often?” he asked, looking at her tight fists.

She went to pass him, but he put his hand out, stopping her from going.

“Seriously? What?” She folded her arms over her chest.

The glare she gave him turned him on. He’d never seen her look so ferocious. He blocked her exit, watching her.

“Why did you take it, huh? Did it get you off to go inside a locker that’s not yours? You know what? I don’t care.”

She went to pass again, only this time, he caught her shoulders, pressing her up against the wall. At first, she struggled against him. He watched the fight in her gaze, how she tried to overpower him, but he wouldn’t let her go.

The truth was, he didn’t have a fucking clue what he was doing or even why. Only that he had to.

“Let me go.” She went to strike him, and he caught both of her hands, pressing them above her head.

She growled the moment he did it.

Still, he didn’t speak even as she fought him, her body arching against him. The thrust of her tits pressed on her shirt.

He was used to women being all over him, used to the female sex wanting him and willing to do whatever he said.

This, with Harper, was new.

He didn’t mind it. In fact, he found it rather refreshing. She wouldn’t give in, wouldn’t allow him to have what he wanted.

Staring into her sweet blue eyes, he remembered them the first day of kindergarten. How scared she’d looked as she watched the other kids. Like him, she observed. She waited to see what was coming her way.

Where he had three friends, she had none. No one wanted to be her friend.

He’d watched her over the years. Seen her grow up, again, always alone, never one to join the crowds.

He wanted to break that goodness, to shatter the innocence within her.

He’d never been allowed to be free, to be good, to be strong.

She was everything he’d been ordered to avoid.

Now, though, after her mother ended her tragic life, there was a darkness swirling within Harper. Shadows clouded her once clear gaze.

“Don’t you have some teenager to screw?” she asked, fighting him.

“You want to take the job?” He finally spoke, and seeing that spark of anger flash within her gaze turned him on.

“I’ll let you go when I’m good and ready.” He kept her hands locked above her head. He wondered what she’d do if he caressed down her body, touching her tits before cupping her between her thighs. She’d probably come.

So much repressed rage.

He could tutor that, help it come out.

Leaning forward, he stroked his cheek against hers, feeling how soft her flesh was. “We’re going to have a lot of fun together, you and I.” 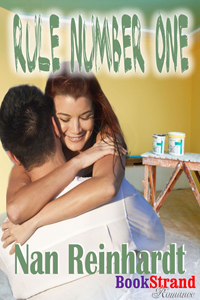