Mages' Law states that a Star Mage must reproduce, if he is able. King's Law allows a mage any sexual partners he wishes. The life of a male mage who prefers the company of other men on the sheets is far from easy, but what starts as a hard lesson in survival, ends up as a hard lesson of another sort. 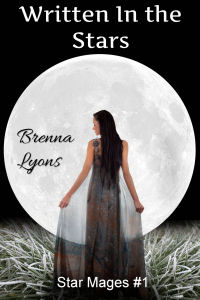 Galon glanced around the barroom, his heart pounding in anticipation. It was always like this when he sought out a sexual partner, and it had been far too long since he'd had the opportunity to do so. Though he knew of no other mages in the area, and King's law allowed a mage male lovers, he'd taken blows more than once--by mage and farmer alike--for his inclinations.

He'd never dared report the abuse; his attackers knew he wouldn't. Though King's law allowed Galon his sexual choices and forbid such abuses, Mages' law was against him. Complaining would only invite more of the same.

A rough farmer caught his eye. The man was the type he most often succeeded with. Whether they honestly preferred men on their sheets or simply wanted to experiment wasn't Galon's concern. Even if they wanted the thrill of topping a mage and nothing more, they were both getting what they wanted from the liaison.

He looked around at the thinning crowd of night sleepers, thankful that the seat he'd chosen afforded none but the farmer an unobstructed view of him. It was time to take a chance.

Galon met the farmer's gaze and crossed one leg over the other, fitting the upper knee onto the curve of the lower. It was a well-known sign among men, less so among women, who also chose to sit this way at times. Any man observing the move would know his mind and meaning by it.

The farmer hesitated, then smiled, his gaze ranging the length of Galon's body, from the top of his midman-green hood to his scuffed boots, the same boots he'd worn on the day of his escape, more than a year earlier.

He forced the memories of the frightened nineteen-year-old he'd been from his mind. Galon had learned a lot about staying alive in the past year, more than he'd thought he still needed to learn when he'd left home.

But now was not the time for those thoughts. He waited for the farmer's determination, hardly daring to breathe.

A nod of his blond head, a single terse movement, had Galon releasing a breath he hadn't realized he'd been holding. The farmer tossed a few coins on the bar and rose, striding through the door and into the street.

Galon knew what to expect next. The ritual of a mage finding a male partner was always roughly the same.

Unless it is a trap.

He pushed that thought away, tossed a silver coin on the table to pay for his half-finished ale, and strolled out as if he had nowhere to be in particular. Behind his robes and trousers, his cock was already half-erect and aching, his heart racing. He forced his breathing to a slow, steady stream. Mother, but it had been far too long since he'd touched another.

As he'd expected, the farmer was just turning the corner into an alleyway, the one between the granary and a storehouse. He was leading the way for Galon. If the farmer had tarried and waited for Galon to rise first, it would be a sign that Galon would choose the place for their play. But the farmer had risen first; the choice of where was his and not Galon's.

He gave the farmer a lead of a few moments, playing the game though he practically salivated to get to the end of said protective misdirections as quickly as possible. Galon walked faster than he should, that thought driving him on.

In fact, Galon was so intent on his goal, the knife was at his throat before he realized the farmer wasn't at the far end of the alleyway, waiting for a sound to turn another corner.

Galon bit back a groan at that. He'd been beaten several times; it was a sad risk he took. But no one had robbed him as part of the punishment before.

He reached into his robes, sick at the thought of losing what he'd amassed. With only half the season left to work and his savings gone, his winter would be very lean indeed.

Mayhap leaner than my first.

The farmer grasped the pouch in his free hand, chuckling darkly. "It never fails that your type do what I order."

Galon ground his teeth at that. It was galling to know himself for one of the most powerful beings on the planet yet, by a twist of the Mother's humor, find himself powerless before his lesser.

"You will move on to your amusements without a word. Will you not, Mage?"

"Of--of course," he stammered. With a knife at his throat, what else would Galon say to such a command?

There was a jingle of coins cut short, no doubt the farmer stuffing them into a pocket. Then the hand that had held his pouch moments before crossed Galon's body and cupped his cock.

He thanked the Mother that it was flaccid. Better the chance he will leave without doing me physical harm.

It wasn't that Galon feared a beating. Between his father and those he'd met on his travels, he'd learned to take a beating well. One always healed, unless he were killed in the attack, and then his troubles were over.

But bruises on a Star Mage were not easily explained away. There were only so many times one could claim a fall or other accident without people whispering things he didn't want whispered to other mages.

The knife left his throat, and the hand at his cock started stroking. Galon closed his eyes, trying to stifle his natural reaction to such a masterful and knowing touch.

That was impossible. The farmer had obviously played at men before, and it had been far too long since anyone had played at Galon. He hardened, his face burning at the reaction even as he prayed the farmer was going to follow it out. It would almost be worth the loss of coin to find relief from this maddening arousal.

"You are a responsive little whore," the farmer grumbled.

So that is the game he likes to play. Galon had played it and many others. Long ago, he'd resigned himself to the fact that there was seldom pleasure without pain, seldom satisfaction without some cost to his self-respect in bargain.

The farmer's hand delved through the split in Galon's robes, wrenching the lower fasteners open, returning to play at his body. Galon bit his lip, swallowing a groan of pleasure. Mother, but he wanted this.

No, not this, but this will do.

He'd had worse, men who were curious but wanted to pretend they weren't, men who were fast and hard, beating him harshly when they had spent...or when he had. At least this farmer had played in a man's body before.

Even if the farmer liked a rough fuck, chances were that Galon could get some satisfaction out of it. The fact that he was bothering to work Galon up was proof enough of that.

The words stuck in Galon's throat, and his jaw tightened involuntarily, holding back what the farmer had ordered. Even if he wished to speak the words--and I don't--they wouldn't emerge. It was the one thing he'd vowed he'd never do again.

With a sinking sensation in his gut, Galon forced his mouth and lungs to form his answer. "No." He winced at the note of decision in his voice, knowing the retaliation would be swift and painful.

The hand left his cock and the farmer backed off a step. Galon's dash for freedom lasted only a step. A hand closed around the back of his neck, and the farmer turned and propelled him into the stone granary wall with a considerable amount of force.

Light danced before his eyes, and the metallic taste of blood flooded his mouth. Galon pushed weakly at the stone, disoriented, cursing the fact that they were in town. Illegal or not, he would have used his powers against the farmer were they in a place to do so...a forest or even a field of crops. His attacker had planned this well.

Liar, his mind shouted at him. He wouldn't retaliate, because he couldn't risk being judged for his sexual tastes, and they both knew it was true.

The crush of the farmer's body was abruptly gone, and Galon's knees buckled. The stone scraped at his face, and the force of his landing on the dirt track drove the air from his lungs.

He fought his way up from the brink of unconsciousness, his blood running cold at the sight of a Master Mage crouching over him. The red piping of a Great House stood out in stark contrast to the black robes in the light spilling from the street.

"What crimes?" the master barked.

"Stealing," Galon replied weakly, uncertain of how much the master saw of their interaction. With any luck, he hasn't seen more than the farmer's attack on my person. "And assault."

The master's gaze slid from Galon's face to the open front to his robes. His fingertips feathered over Galon's aching cock, sending a wave of delight through his body.

It was gone nearly as quickly as it settled on him, about as quickly as it took the master's jaw to tighten and his eyes to narrow in anger that seemed to shift the energy around their bodies.

"Master Anzel?" another man called out.

"Take him to the magistrate."

Galon's heart pounded in terror, and his head and stomach danced in sick apprehension.

"I will bring the young midman along."

He closed his eyes, knowing well that he'd face a judgment of his own under Mages' law once the farmer was dealt with. This was a momentary reprieve, not a pardon of his crimes. No doubt the master was about to make that all too clear to him.

But did he see it? Or is he guessing? Not that it made a difference. If the master was of a mind to punish him, lack of first-hand knowledge of the facts wouldn't stay his hand.

Master Anzel dragged him to his feet, and Galon half-expected a good shaking to follow, but it didn't. Surprisingly, the master steadied Galon when he stumbled, standing straight and sure despite the burden of half-supporting another man's weight, staring down at Galon as if searching for something.

"Are you even old enough to travel alone, Midman?" he demanded.

Galon's face darkened. "Yes, Master. I reached twenty a season ago." He wouldn't offer the information that he'd been roaming for more than three seasons longer than that, though he'd answer the question truthfully if it was the next one asked.

"What is your name?"

"Galon of Outsten, Master." It wasn't strictly true. Since he'd been disowned by his family, he could claim no family affiliation, but that fact would raise more questions than he cared to answer this night.

He nodded, turning Galon toward the street. "Be mindful that you tell the magistrate the same lies you told myself and my guard, Midman Galon. You would be wise to."

A sob nearly knotted his throat. Galon swallowed it down painfully, unwilling to vent such a shameful emotion before his judge, certain now that Master Anzel had seen much more than Galon had hoped he had. "Yes, Master. As you say."