The Siren and the Sword

Kyle Wadsworth arrives on the Harvard Campus only to discover, much to his surprise, he's magical. Thus begins his four-year journey to learn where he fits in the world, which ultimately becomes a quest for true love.

Upon arrival at Veritas, Kyle quickly joins a group of peers who become involved in solving the mystery of a seductive siren in the library, while they learn about the magic inside themselves and around them, as well as the secret history of magic and those who practice it.

Kyle's trials and tribulations range from his need to meet the bisexuality prerequisite before he can study sex magic to the fact that the ancient prophecy he translates for his thesis project seems to be about himself. If Kyle is right, he'll need to find his true love, or the world as we know it is doomed. 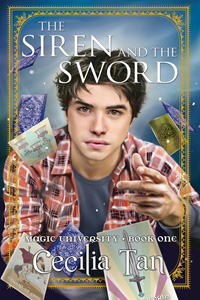 The Siren and the Sword

“I hope anyone who enjoys a great ongoing mystery imbued with fantasy, erotica, love and drama opts to read this and the rest of the books in the Magic University series.”

“Kyle's journey of self-discovery is in some ways a familiar one. A young man finds freedom in college, finds abilities he did not know he had, and finds someone he likes, maybe even loves. The magic adds a level of spice to Kyle's journey. ... There are many very sensual scenes in the story, with a final scene that is a climax in a lot of interesting ways. The Magic University series looks like it's going to be a fun ride with lots of ... eroticism. The Siren and the Sword is a delicious start.”

“This is a grown up, sexy and fun story. Ms. Tan has done an outstanding job of feeding my Harry Potter obsession in a very adult fashion. I look forward to reading her other books in this series.”

“Joining Kyle as he experienced many rites of passage, both ordinary and magical, was a delight. It was such a treat to escape to Veritas. Count me in for the whole series, it’s just that good.”

The Elwyn Library had a special kind of quiet. In the high stone spaces of the reading room, the echoes of nothing mixed with the stifling hush of the mass of paper that was the library collection. During the day, the sound of a footfall or of a page turning would be swallowed up. At night, the hush was hypnotic, like the steady sound of rainfall or wind rushing through the trees.

The student's head began to nod. He jerked awake, once, twice... but there was nothing to keep him awake. He was alone in the library, after hours, all the lights doused except for the reading light he'd brought with him to illuminate his cubby. He'd stayed hidden until after the building had closed, eager to spend the entire night with the precious texts he needed for his term paper.

But in the darkest hours of the night he was beginning to feel the pull of sleep, of dreams. His head sank once again toward the page.
He jerked upward again. Was that a noise? Had he heard something after all?

He turned off the light. Could it be a security guard? Or another student with the same idea as him? He crept away from his desk deep in the stacks, past shelf after shelf of ancient texts, tiptoeing as he went.

There, a soft sound like a sigh! He froze. Just on the other side of the bookshelf he was standing in front of!

He felt her before he saw her, a warm hand reaching around his middle, startling him at first. But he could smell her perfume, feel the softness of her lips across the back of his neck. "Sarah?" he whispered. It must be her; his girlfriend was the only one who knew where he had gone, and she must have planned this little surprise.

"Shhhhhh," came the reply, and it turned him on that she was being so secretive. Her hands opened his fly and pushed down his pants. He could feel her fingernails scratching lightly at his balls and he leaned his arms against the shelf in front of him while her fingers wrapped around his lengthening erection.

He moaned as she stroked him, then gasped as she raked the nails of her other hand down his back while she dropped to her knees. Her wet mouth replaced her hand on his cock and he bit his lip, trying to keep quiet. Sarah had never been like this, so forward, so eager. They still hadn't had intercourse yet, just heavy petting, and she had only gone down on him once, but...

Maybe she had been waiting for the right opportunity? he wondered, as her tongue did wicked things to his cock. Maybe she felt they were finally close enough. Taking things so slowly had been frustrating but rewarding at the same time, as they'd had ample time to learn each other hearts while learning how to touch and pleasure each other.

She must have read up on blow-jobs or something, though, he thought. She seemed to have perfected some truly expert techniques if how close he was to coming was any indication.

But when he was nearly there, she pulled back. "Sarah?" he tried to ask again, looking down in the dark, but he could not make out her face in the shadows. The library building had almost no windows in the stacks and very little ambient light seeped in from outside. Quite suddenly she leaped up, wrapping her arms around his neck and her legs around his waist. He gasped as he felt the velvet wetness engulfing his prick that had to mean she had impaled herself on him. I thought we were going to wait! he thought, but he wasn't about to interrupt her when she was so very determined. His arms went around her reflexively, and his hands slid down to her buttocks to support her weight.

She felt like she hardly weighed anything as she rocked against him, milking his cock with her body and grinding herself against him while digging her nails into his shoulders. He helped her to move as best he could, as she seemed to bring herself off, much to his amazement, and then keep going. I'm not wearing a condom! he thought suddenly, but she was the type who would have planned everything out. If she had waited in here, snuck in, to surprise him like this, then surely she had taken precautions...

He had no choice anyway. She was wringing his orgasm out of him before he knew it, clinging hard to him until his softening cock slipped wetly from her. Then she sprang back, leaving his arms suddenly empty and cold. "Sarah?" He took a step forward...

It wasn't until he went to the restroom an hour or so later that he realized his pubic hair was damp and matted. Had it been a wet dream? But his underwear was dry...

And it wasn't until the next night, when he got undressed in front of his roommate, who commented on the pattern of fingernail marks on his shoulders, that he believed it hadn't been a dream.